"Ohio State has extraordinary faculty who use creative and innovative ways of engaging with students.”

RON RATNER wasn’t always a Buckeye. In fact, he said that before being appointed to Ohio State’s Board of Trustees in 2007, “the only time I’d ever been on campus was for three and a half minutes getting pinned in a high school wrestling match.”

But times have changed. “I made a real commitment to engage with the university and have spent a lot of time on campus and in Columbus,” said Ratner, a Clevelander native. “I became a real fan of the university. I became a Buckeye.”

Now, Ratner and his wife, Deborah, are making an impact on teaching at the university through their generous teaching awards. The awards, presented for the first time last fall to five faculty members in arts and humanities, recognize faculty for making a difference in students’ educations, lives and careers.

Last fall, the couple made a $1 million gift to establish the Ronald and Deborah Ratner Distinguished Teaching Awards. The current-use gift will fund the awards for at least 10 years. Each year, five faculty members will receive awards, which include a $10,000 cash prize plus a $10,000 teaching award to fund future projects.

“Higher education has been a philanthropic interest in my family for a long time,” Ratner said. “Faculty, particularly in arts and humanities, are unsung heroes; this is the core of where a quality education lies.”

The idea of honoring teaching practices resonated with the couple. “We started thinking about where we could make a difference and stumbled upon this idea; it seemed to work on many levels. We hope it has a real impact on teaching, on the faculty and ultimately on the students, in and beyond the classroom,” he said.

The Ratners were present when the five inaugural awards were formally presented last fall. 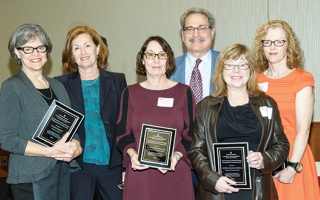