Nine postdoctoral scholars in the College of Arts and Sciences were named 2021 President’s Postdoctoral Scholars, supported by the Office of the President.

The President’s Postdoctoral Scholars Program was launched in January 2018 to attract highly qualified early career scholars as postdoctoral trainees who will become leaders in their fields.

“Advancing scholarship and innovation for the benefit of the communities we serve is at the core of our public land-grant mission. These phenomenal scholars are the embodiment of that mission, and we could not be more proud of all they have accomplished thus far," said President Kristina M. Johnson. "And they’re just getting started. We look forward to working alongside them to address some of our world’s greatest challenges.”

Recipients receive a minimum of $50,000 in salary support, benefits and $5,000 for research-related and program travel expenses. Scholars also receive faculty mentoring and professional development opportunities. Appointments are for a minimum of 24 months and renewal for the second year is subject to a positive evaluation.

A total of 10 postdocs were named President’s Postdoctoral Scholars. Those from the Arts and Sciences include:

Nandini Trivedi, advisor
Addison, who earned his PhD in physics from the University of Pennsylvania, specializes in condensed matter physics and studies how spatially dispersive charge currents are significant in understanding the dynamics of electrons in new quantum materials.

Adam Leroy, advisor
Benincasa earned her PhD in physics from McMaster University in Ontario, and her research focuses on the connection between star formation and the interstellar medium in galaxy simulations, with an emphasis on the galactic environment.

Karen Goodell and Elizabeth Marschall, advisors
Fetters earned her PhD in ecology and evolution and a minor in teaching from the University of Pittsburgh. Fetters’ research focuses on how plant pollination is impacted by the relationship between plants and fungus.

Alison Bennett and Bryan Carstens, advisors
Hopkins earned his PhD in soil microbiology from the University of Kansas. His research focuses on the impacts of prescribed fires and other land management techniques on soil fungal communities and their function in ecosystems.

Simone Drake, advisor
Irele earned her PhD in Africana studies and comparative literature and literary theory from the University of Pennsylvania. Her research lies at the intersection of postcolonialism, transnationalism and diaspora, focusing on global Black belonging and unbelonging in contemporary African migrant narratives.

Matthew Anderson and Matthew Sullivan, advisors
Mishra earned his PhD in biology from the Indian Institute of Science Education Research Pune, India. His research focuses on the quantitative genetics and evolution pathogenesis of the fungal pathogenic yeast, Candida albicans.

Vincent Roscigno, advisor
Nicholson earned a PhD in sociology from Indiana University Bloomington. His research examines how political and economic factors influence poverty and ethno-racial differences in poverty, and the factors that prolong or diminish various forms of inequality.

Scott Gaudi and Christopher Kochanek, advisors
Stephan earned his PhD in astronomy and astrophysics from the University of California, Los Angeles. His research focuses on orbital dynamics of multibody systems, multistar evolution, and galactic nuclei and complex gravitational dynamics.

Grace Zhou, Department of Near Eastern Languages and Cultures

Morgan Liu, advisor
Zhou earned her PhD in cultural anthropology from Stanford University. Her research seeks to understand questions of labor, care and transnational exchange across Asia, particularly in areas where China’s Belt and Road Initiative interacts with the former Soviet republics of Central Asia. 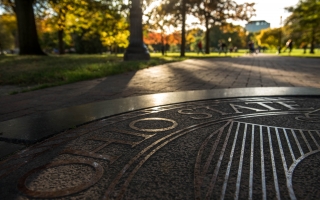