“This is the first DoD collaborative effort between the United States and the United Kingdom,” DiMauro said. “It’s important because it establishes a link to the Imperial College, which is the top engineering school in the U.K.  Additionally, the College of Arts and Sciences is fostering an exchange program between Ohio State and the Max Planck Institute for Quantum Optics in Germany, which is the top lab in the world studying attoseconds.”

Although the major partners for the collaboration were carefully selected for the strength of the expertise they could bring to the project, DiMauro still has to deal with all project nuts and bolts. As the Principal Investigator on the MURI grant he will be responsible for all work on the project, including that in the U.K., subcontracting the work of other collaborators and reporting progress to the Air Force Office of Research (AFOSR), which administers the grant.

DiMauro, who came to Ohio State from Brookhaven National Laboratory in 2004, established the Agostini - DiMauro Ultra-fast Atomic Physics Research Group. Their discoveries in the past 10+ years, enabled by advances in both laser science and optical technology, puts them in the vanguard in this area. Today, seventeen researchers — faculty, postdoctoral fellows and graduate students — take an active approach to both theoretical and experimental ultrafast atomic physics.

“Another important component of the MURI grant,” DiMauro said, “is that it allows the training of young researchers and adds more postdoctoral fellows and graduate students to our research group. Finding the space for them will be the only problem!

“Work in atomic, molecular and optical physics is very interdisciplinary — optical science drives the economy, just look how the laser changed our world. Our graduates go on to jobs in industry, national labs and academia. Our MURI team will build on this tradition, exploring the fundamental physics and applications using this new class of laser light.”

DiMauro’s group is developing state-of-the-art mid-infrared optical tools for enabling studies of strong-field and ultrafast physics. Their laboratories feature four state-of-the-art ultra-fast tabletop laser systems (a fifth laser system is under development) that accelerate work on the interaction between atoms and intense laser pulses on an atomic timescale (attoseconds).

According to DiMauro, the word "attosecond" (1 as = 10-18 s), is a 21st century addition to the vocabulary of physics. Attoseconds — the natural time that electrons move in matter — are ultra-fast pulses that freeze motion like shutters on a camera. The first attosecond pulses were reported in 2001 by Agostini and his collaborators in Paris.

“Our labs are equipped with tabletop lasers that can produce short pulses of light that can be used to create even shorter pulses: attoseconds,” DiMauro said. “These pulses act as a camera freezing the electron’s motion in a snapshot. Then a sequence of snapshots, like the frames in a movie, can produce a molecular movie, except in an incredibly short time: one billionth of a billionth seconds.

“Our research is built around two facets of the molecular self-probing paradigm derived from the strong-field rescattering model and scaled to long wavelengths:  Electron Orbital Tomography and Laser-Induced Electron Diffraction.  We want to use these two methods to, in effect, make ‘movies’ of all the players (electrons and nuclei) that make up a molecule.”

The goal of attosecond science is to observe and control ultra-fast electron motion on the natural atomic timescale.

For non-physicists it is difficult to think in scales we cannot “see.” And, without laser technology, physicists could not “see” them either.

“Our work in the mid-infrared spectral region is in the molecular fingerprint region but way outside the eyes’ vision,” DiMauro said, “but molecules do see and react to it.”

Clearly, it is important to push these frontiers of seeing. Advances in the generation, amplification, control and measurement of femtosecond laser pulses has had enormous impact in many areas of science, technology, medicine and national security. 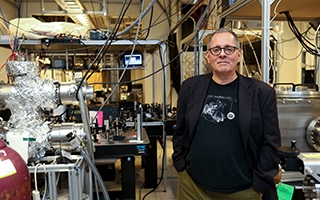