From Field to Fuel to Flight: Making Aviation Fuel from a Common Weed

The dream of creating viable biofuels to alleviate the world’s energy crisis is not new, but it has been elusive. Enter an Ohio State dream team with funding from a unique grant to transform a common weed into aviation fuel; the Department of Agriculture and the Department of Energy have invested $1.1 million in this project.

While no one wants to put a date on when pennycress oil might be fueling our jets, the researchers believe in this project: “What excites us most is the chance to solve a critical, global problem with enormous social and economic impact, and we will do it as a team.”

The team is tinkering with pennycress, a plant that Alonso calls “a Cinderella crop” with all the right stuff.

“It is a common weed that does not compete with food crops, but has something no other weed has,” she says, “an oil that could fuel our future — given the right conditions.”

Alonso will use plant metabolomics to enhance pennycress’ carbon flow and produce more fatty acids that can be transformed into biofuel. Grotewold will establish plant-gene regulatory network structures to understand mechanisms underlying combinatorial gene regulation. Shah will assess plant viability conducting multivariate techno-economic analyses to see what works, what does not, and how to make it work better.

While no one dismisses the challenges involved in turning pennycress into an economically viable and sustainable source of jet fuel, to this team, hard work is merely a detail. Plus, they are secure in the knowledge that multiple resources are just steps away on the Ohio State campus, including:

Ohio State’s multiple opportunities for cross-disciplinary networking and collaboration, plus funding for leading-edge equipment and start-up grants translate ambitious ideas into game-changing reality. Project researchers have an ongoing relationship with the Commercial Aviation Alternative Fuels Initiative (CAAFI), an effort to bring commercially viable, environmentally sustainable aviation fuels to market. The University of Illinois and The University of Minnesota are also conducting complementary project studies in collaboration with Ohio State’s team. 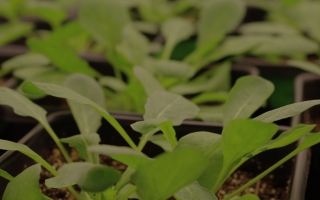