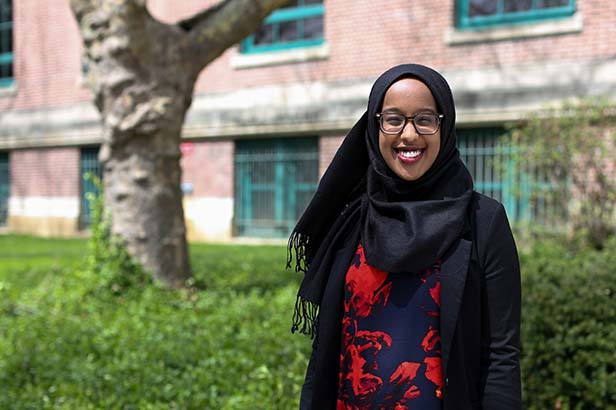 Katherine (Katie) Coffman, assistant professor, economics, conducts research in the fields of microeconomic theory and experimental economics. Katie Coffman is a rising star in the field of gender differences in behavior in strategic environments. She spent 2014-15 on leave at Stanford University working with the leaders in this field. Her research has been published in the top economics journals. Coffman is a devoted teacher and advisor, and she recently was named a 2015 Distinguished Undergraduate Research Mentor.

Nima Dahir, a junior honors student from Hilliard, Ohio, majoring in economics and mathematics, was named a 2015 Beinecke Scholar. Founded in 1975, the program provides $34,000 to support graduate studies to 20 students nationwide who have demonstrated superior standards of intellectual ability, scholastic achievement and personal promise. Dahir, the fifth Ohio State student to receive the scholarship, plans to obtain her PhD in economics and pursue a career in academia.

Outside the classroom, Dahir is a Buckeye Leadership Fellow, a volunteer and board member for the Broad Street Food Pantry and the past editor of the Journal of Politics and International Affairs.

The number of economics majors at Ohio State increased by two-thirds from 2003 to 2014, reaching almost 900 by 2014, including double majors and pre-majors.

Recent and on the Horizon:

The distance-learning course allows students more flexibility in controlling their educational experience; the instructor is able to simultaneously present a lecture to students in the lecture hall and students online in remote locations. Lectures are recorded for later student access.

The Department of Economics hosted the 2015 Midwest Economic Theory and International Trade meetings in April. More than 100 economists presented their research during this conference, with some of the speakers traveling from Europe or Asia.

The department participates in several university and Arts and Sciences Strategic Initiatives, including Decision Sciences and Health and Wellbeing. A new professor has been hired as part of the Discovery Themes’ Data Analytics Initiative.

Consisting of 15 to 16 credit hours, the Quantitative Economics minor provides students a solid basis for a variety of careers. This minor can also serve as an excellent base for future graduate work in any of the social sciences. (QUANT ECON-MN)

The Insurance Minor is designed to provide students across all university departments with an opportunity to complement their major studies with a specialization in Insurance.

Economics offers an understanding of how the economy operates and provides a basis for informed opinions on many public issues. An undergraduate minor in economics provides good preparation for careers in government, business, organized labor, trade associations, or teaching in the social sciences. (ECON-MN)