Arts and Sciences community motivated to ride in Pelotonia

Arts and Sciences community motivated to ride in Pelotonia 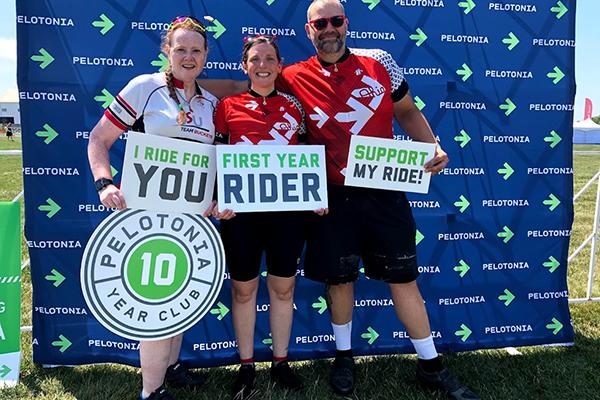 In 2016, Smith and Wetzel lived in Illinois and were elated to learn they were expecting their first child together. A few weeks later, Wetzel was diagnosed with breast cancer.

The next months were a whirlwind. Prenatal appointments to monitor Wetzel’s pregnancy rolled into meetings with oncologists to discuss cancer treatment options, and it was clear how much coordination went into providing comprehensive care. As Smith and Wetzel moved forward together to beat cancer and welcome their son, Isaac, a deep appreciation washed over them.

“It was obvious to us that so much research and so many people had been involved in learning how to deal with this issue,” Smith said. “The feeling of gratitude for having all those people and many who were involved with developing that body of knowledge was overwhelming.”

Not long after Isaac was born, the family moved to Columbus and learned about Pelotonia, a yearly cycling and fundraising event that since its inception in 2009 has raised over $236 million for cancer research. Motivated by his family’s personal connection to cancer and the gratitude he felt toward those who cared for his wife, Smith immediately got involved.

Fast forward to 2022, and Smith, now the distance education coordinator for the College of Arts and Sciences’ Office of Distance Education, is a dedicated member of Team ASC. A subpeloton of the university’s official peloton, Team Buckeye, Team ASC consists of passionate Arts and Sciences faculty, staff, students, alumni and friends committed to ending cancer.

“This will be my 12th year riding in Pelotonia, and my first in the ASC/Team Buckeye peloton. For my wife, Victoria, and me, participation took on a new meaning when our two boys, then teenagers, were diagnosed with testicular cancer in 2012 and 2013. Both continued to ride, even during recovery from surgery and chemo, and they are now, happily, cancer-free. We look forward every year to the opportunity to celebrate their recoveries by giving something back, even when we haven’t trained as much as we might have!”

Many who participate in Pelotonia have been touched by cancer in some way, whether through themselves, a family member or a loved one. For Smith and Wetzel, Pelotonia is a way to give back, to contribute to the push for more knowledge and research that was vital to their own triumph over cancer.

“As a scientist, I know how research moves along, and I know that funding is needed,” said Wetzel, assistant course coordinator in the Center for Life Sciences Education. “If we don’t fund, then we don’t perhaps get some of these new and effective treatments. It marries my love of science and my history with cancer. It’s a good fit.”

Pelotonia Ride Weekend 2022 is Aug. 5-7. The three-day event kicks off Friday with an opening ceremony, continuing through the weekend with a variety of cycling options around central Ohio. Participants register as a rider, volunteer or challenger, and individuals can also make an impact by cheering for riders along the route or donating to a participant’s fundraising efforts.

Every penny Pelotonia raises goes toward cancer research — from enhanced treatment and therapies to prevention and early diagnosis. The community-driven event grows each year, inspiring a more steadfast commitment to fighting cancer one pedal at a time.

“It’s a feeling of community, of togetherness,” Smith said. “People are very much on the same page. It’s very, very positive. I don’t know if I’d ever experienced a day in my life where I was surrounded by so much joyfulness. I don’t think I’ve ever experienced a day in my life of hearing, ‘Thank you,’ more — you hear it nonstop. It’s heartfelt and meaningful, and you’re inspired by other people.”