From Aug. 2-4, more than 7,400 individuals rode in Pelotonia, an annual bike ride and fundraiser for cancer research at The Ohio State University Comprehensive Cancer Center – Arthur G. James Cancer Hospital and Richard J. Solove Research Institute. For the eighth year, the College of Arts and Sciences formed a team to contribute to the cause.

The college peloton, a subpeloton of Team Buckeye, has raised nearly $13,200 by cycling a total of 485 miles between 10 riders and volunteering, and the fundraising doesn’t stop until Oct. 4. 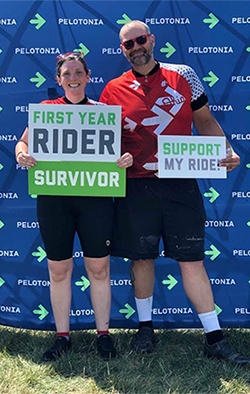 Team Buckeye – Team ASC was led by Jeremie Smith, program coordinator in the Department of Near Eastern Languages and Cultures, whose wife, Maggie Wetzel, assistant course coordinator in the Center for Life Sciences Education, also rode this year as a survivor less than three years after being treated for breast cancer.

“My wife and I were blessed to have a great team of doctors when she went through breast cancer treatment while pregnant with our son,” Smith said. “We both feel a responsibility to find meaningful ways to give back and express our gratitude, so participating in Pelotonia provides us an opportunity to raise funds and awareness for cancer research while joining a community of people in celebrating life, love and cycling.”

Including Smith and Wetzel, Team ASC consisted of 15 members this year, including:

“Riding in my first Pelotonia with Team ASC showed me firsthand the dedication and compassion of our Arts and Sciences colleagues,” said Gretchen Ritter, executive dean and vice provost, who rode only two days after her first day of work at Ohio State. “We can all be proud of our community for supporting cancer research at Ohio State and standing up for those affected by this terrible disease.”

In addition, student riders Yunqiu “Kelly” Luo (Department of Physics) and Michael Biggerstaff (Department of Near Eastern Languages and Cultures), collectively rode 200 miles and committed to raise $2,500 for Pelotonia. Luo received her doctorate the very next day at summer commencement on Aug. 4. Including Luo and Biggerstaff, Team ASC has committed to raising $18,000.

In total, Pelotonia 2019 riders have raised $15 million and counting.

“I rode because I am a scientist, and without research, other scientists will not develop new and more effective treatments,” Wetzel said. “I rode for all the people who were not as lucky as me, and for those who participated in research so that I am here today.” 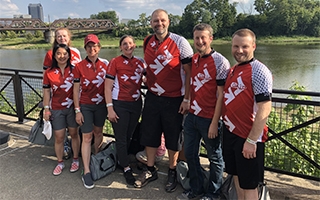