It's a scary time for bats

While a spooky symbol of Halloween, bats around the world are facing threats of extinction. Bryan Carstens, a professor in the Department of Evolution, Ecology and Organismal Biology who has studied bats for 20 years, explains what you need to know about the unique mammals. 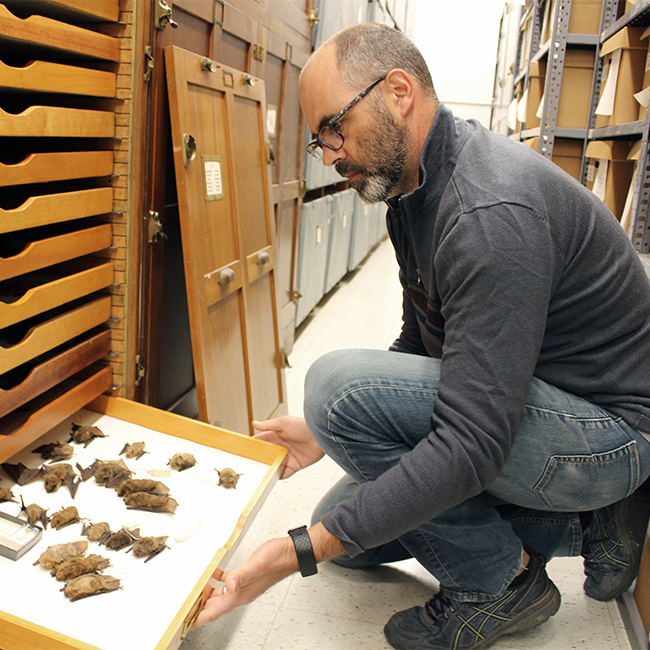 EEOB professor Bryan Carstens examines a few of the thousands of bat specimens housed at the Museum of Biological Diversity.

How many species of bats are there?

About 1,400. My PhD student Danielle Parsons is conducting research that suggests we might be missing another 400 to 500 species that are very genetically different from one another, but superficially look the same so they’re described as the same species. In Ohio, there are 10 bat species found pretty commonly. Several of those have been impacted by white-nose syndrome, so their population levels are way down. Others are being negatively impacted by wind farms, as well as general habitat loss due to human activity.

It’s a really hard time to be a bat right now, particularly in this part of the world."

What is white-nose syndrome?

White-nose syndrome is a disease caused by the fungus Pseudogymnoascus destructans, which hangs out in the dark and damp caves that bats spend the winter in. It’s almost like athlete’s foot in that it causes bats to feel itchy and uncomfortable. 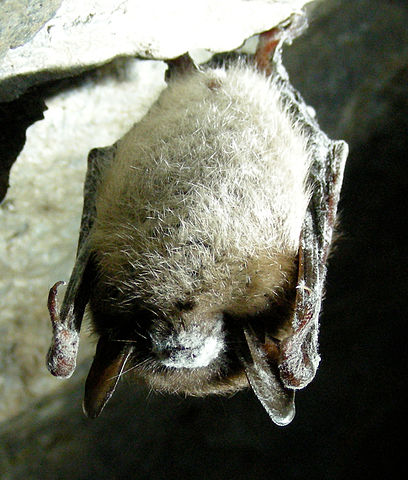 Insect-eating bats living in Ohio hibernate through the winter when there aren’t any insects flying around, but because white noise syndrome makes them itch, they continually wake up and try to groom themselves. Every time they do this, they burn a lot of fat because they have to raise their metabolic output and heart rate so they can be conscious to groom, and then they have to go back into torpor (hibernation), which takes more energy. The net effect is they run out of fat stores in January instead of April, and then they starve to death.

The fungus was introduced to the U.S. in 2006 by people who got spores on their caving equipment while in Europe and accidentally exposed bats in New York to it. It first reached Ohio in 2012, and around 90 to 95 percent of bats in affected habitats died over the winter that year. Population levels are way down compared to 10 years ago, and with a 20- to 30-year lifespan with usually just a single pup a year, bats don’t repopulate fast.

Bat biologists are trying multiple things, such as trying to kill spores in the caves when the bats aren’t hibernating in them. During the summer they’ll go in and clean the caves as well as they can, but of course it’s really hard to clean a cave. Others have tried spraying fungicide mists on bats as they go into hibernation, hoping it will prevent spores from establishing themselves on the body of the bat.

What other problems are impacting bat populations?

Almost a quarter of bat species are listed as vulnerable, endangered or critically endangered by the International Union for the Conservation of Nature (IUCN). Five bats we know of have gone extinct already, all of which were endemic to relatively small islands and impacted by human-induced habitat changes. Overarching problems are deforestation and associated habitat loss, as well as the loss of insects due to industrial chemicals in farming.

Sadly, there are also cases of malicious acts by humans. Many bats hibernate, and do so in large numbers in places like caves or abandoned mines, and there have been multiple reports of vandals going into these areas with flame throwers and burning thousands of bats alive.

Why are bats popularly associated with witchcraft and vampires?

Bats have a sinister reputation, and it’s unfortunate because sometimes people feel threatened in ways that aren’t terribly accurate. They’re out at night, and some cultures have associated that with devilry or witchcraft. Bats have an interesting appearance that some people might find frightening, like their weird noses that some species use to echolocate. Several species are also bloodsucking, known as vampire bats.

(Bats can actually be adorable, like these cozy guys swaddled in blankets >>)

Can you talk more about vampire bats?

There are three or four vampire species in South America from Mexico to Argentina, and Desmodus is the most common. Blood is their only source of food. Typically they will land on an animal like a cow or chicken, and they have very sharp teeth so when they bite, the animal doesn’t really feel it, kind of like getting a paper cut and not realizing it. 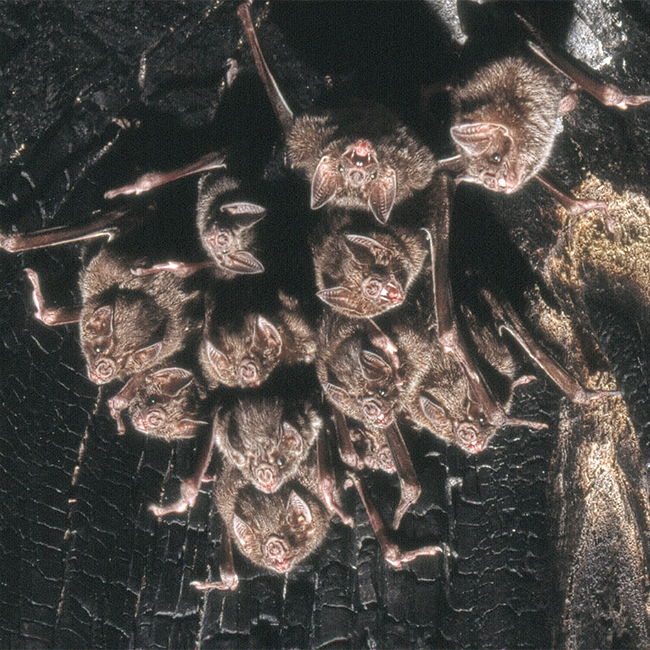 A colony of common vampire bats (Desmodus rotundus), which are small, leaf-nosed bats native to the Americas.

Another cool thing is they have an anticoagulant in their saliva, so they’re able to keep licking blood up and it keeps flowing without clotting. Surgeons are actually using a chemical that’s been synthesized with this compound in surgery.

Gerry Carter, assistant professor of evolution, ecology and organismal biology, does behavioral work with vampire bats, and it turns out they’re really social animals that help each other get food. If Bat A gets a lot of food one night, but Bat B doesn’t feed, Bat A is likely to share food with Bat B. They also remember who has helped them in the past.

What’s the size range of bats?

The smallest bat is the bumblebee bat, which weighs up to 2 grams and could happily sit on one of your small fingers. They feed on small spiders out of their webs — they’re tough little guys. The biggest are fruit-eating bats called flying foxes, which can have a wing span up to 6 feet in width and are found in places like Australia and the South Pacific.

What should someone do if they have a bat in their home or another structure?

A normal healthy bat will not want anything to do with you. As a bat biologist, I’ve been in caves with hundreds of bats flying around, and it’s not like they land on you and try to bite you.

Occasionally, especially in older houses, a bat will accidentally get inside. If this happens, by far the best thing to do is to open a door or window and leave them be for a couple hours, and almost all the time they will find their way out. What probably happens in those cases is the bat is using siding or a shingle as a spot to roost during the night. Bats love small, tight places because it makes them feel safe, so they crawl up into the tightest nook or cranny they can find, and it’s likely they’re able to go from the outside of a house to the inside on accident.

Like all mammals, bats can carry rabies. If you see a bat that is acting strange or on the ground, or in any location where you can actually go up and handle it, that’s unnatural behavior and a sign it's probably sick and you don’t want to handle it. That said, rabies is no more prevalent among bats than it is among other wild mammals.

What’s the evolutionary history of bats?

The oldest fossil we have dates to approximately 55 million years ago, and studies suggest the earliest ancestor of bats probably lived 65 or so million years ago, right around time of the K-T extinction of the dinosaurs. Circumstantial evidence suggests they’re even older than that; they almost certainly started evolving before the dinosaurs went extinct. 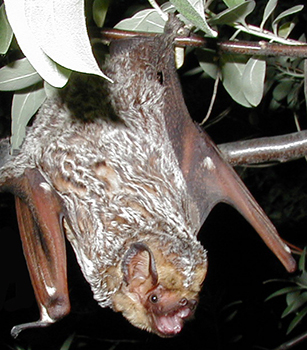 Do you have a favorite bat?

I really like Ohio bats, especially the Hoary bat. They’re extremely good flyers, and can be found from South America to Hawaii.

What can we do to help bats?

Supporting efforts that aim to slow down climate change and to protect as much of the non-manmade environment that remains are good for wildlife in general.