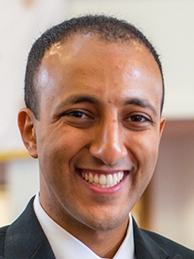 David Nagib, assistant professor of chemistry and biochemistry, has been named a recipient of the 2019 Alfred P. Sloan Research Fellowships — a noteworthy award given annually to early-career scientists from across the U.S. and Canada whose achievements mark them as among the most promising researchers in their fields.

Nagib’s fellowship was awarded in chemistry for his pioneering research on complex organic molecule synthesis.

“I’m thrilled that our team has been recognized with such an honor,” Nagib said. “This support will allow us to pursue some of our riskiest ideas aimed at discovering new medicines by developing free-radical-based strategies to access novel molecular architectures.”

He joins 125 additional 2019 awardees from 57 institutions, as well as 54 past Sloan Research Fellows from Ohio State since 1955.

“Sloan Research Fellows are the best young scientists working today,” Sloan President Adam F. Falk said in the foundation’s press release. “Sloan Fellows stand out for their creativity, for their hard work, for the importance of the issues they tackle, and the energy and innovation with which they tackle them. To be a Sloan Fellow is to be in the vanguard of 21st century science.”

Candidates must be nominated by their peers, and winning fellows are selected by independent panels of senior scholars. Notable past fellows include physicists Richard Feynman and Steven Weinberg and mathematician John Nash, among others.