Ohio State’s Department of French and Italian (FRIT) received excellent news in early December when the Cultural Services of the French Embassy in the United States invited the department to join its prestigious network of Centers of Excellence.

Being named a Center of Excellence — which just 22 universities across the United States can claim — provides funding and project-based support to promote Franco-American relations through teaching programs, encourage research partnerships with France, and generate student interest in France.

Associate Professor Benjamin Hoffmann will be the inaugural director of Ohio State’s Center of Excellence.

“This means that our department is being recognized as one of the strongest departments in the United States for research in French culture and Francophone literature,” Hoffmann said. “It’s an honor to have been recognized by respected members in our field, and it’s also a great opportunity for us to organize cultural events in the future.”

Each university’s Center of Excellence has its own identity, and Hoffmann’s goal is — pending approval from the French Embassy’s Cultural Services division — to use the funding to start a writing residency for French novelists called “Une Chambre à soi/A Room of One’s Own.”

The residency would bring French-speaking writers to Columbus to give them an opportunity to write while also giving lectures to Ohio State students and the Columbus community.

A creative writer himself, Hoffmann recognized the value in having a French writing residency in Columbus when there are so few around the world. The two most prestigious residencies globally, Hoffmann said, are the Villa Medici in Rome and the Villa Kujoyama in Kyoto, Japan, and those are for all types of creatives, not just writers.

He hopes a writing-specific residency at Ohio State would make the department stand out.

“You start with what you love deeply, with what is dear to your heart,” Hoffmann said. “We want to create a space for people to come here with the freedom to pursue literary projects and also to give an opportunity for them to be in an American environment.”

Besides working on a writing project, Hoffmann hopes a writing resident funded through the Center of Excellence would enhance the intellectual life of the department, interacting with students, guest teaching a course, and giving lectures and talks during his or her residency.

Hoffmann hopes to submit different proposals every year that would showcase the resources of Ohio State and Columbus that would be available to potential French students.

The process for being named a Center of Excellence was demanding, with FRIT having to submit an application presenting its strengths and ideas, receive a letter of recommendation from a colleague at a university with an already-established Center of Excellence, and submit to a review process by the French Embassy’s Cultural Services division. 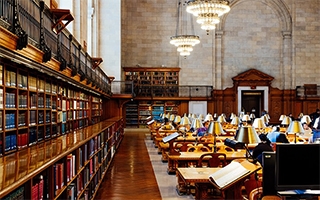