In 2008, Sultana Nahar, research professor in the Department of Astronomy, traveled to Egypt to give a keynote speech on atomic processes. There, she met another female professor from the University of Khartoum in Sudan, and through their conversations, Nahar discovered that the woman was largely disconnected from colleagues outside her institution.

It was a situation Nahar soon realized was not uncommon among other female, particularly Muslim, researchers and academics.

“I found out that there are other women who are so devoted to their work, but who lack outside collaboration that would help them advance faster,” Nahar said.

To address the problem, she founded the International Society of Muslim Women in Science, a network focused on supporting and inspiring Muslim women studying and pursuing professions in STEM fields: science, technology, engineering or mathematics. The society now has members from 31 countries.

The network is part of a constellation of efforts led by Nahar and Anil Pradhan, professor of astronomy, to provide professional support and training for fellow academics around the world. Pradhan’s outreach focuses on India, while Nahar’s targets Arab, Islamic and developing countries. Their work culminated this year, as part of a partnership with Aligarh Muslim University (AMU), an institution in northern India, to participate in the Leadership for Academicians Programme (LEAP).

LEAP is a three-week training program for academics at public Indian institutions who are poised to step into administrative leadership roles. First introduced and sponsored by the government of India in 2018, the program has 15 top Indian colleges and universities pair up with American and other world-ranking institutions to facilitate training in problem-solving, team building, finance, administration, quality teaching and research development. According to the program’s webpage, the initiative is meant to fulfill a long-perceived need to prepare senior faculty for leadership roles.

Wendy Smooth, Arts and Sciences associate dean for diversity, equity and inclusion, meets with female LEAP participants during their time at Ohio State.

The program involves two weeks of training in India followed by one week of training and workshops at a corresponding foreign university. This fall, Ohio State hosted 26 participants from nine universities, who during their visit attended sessions led by Ohio State faculty and staff about themes such as digital education, interdisciplinary research, emotional intelligence, communication competency, teaching and learning skills, and outreach and diversity.

Pradhan said one of the highlights was a diversity and inclusion session presented by Nahar and Wendy Smooth, Arts and Sciences associate dean for diversity, equity and inclusion, about recruiting and retaining women and minorities.

“I think the diversity session is one of the best examples of how we can train people in extensive outreach programs that Indian universities in general do not have,” Pradhan said.

Ohio State has a long-standing relationship with AMU, going back to a US-India Education Foundation grant-funded STEM faculty training program that launched in 2013, creating a Master in Education in STEM education dual degree for Indian postgraduate students. 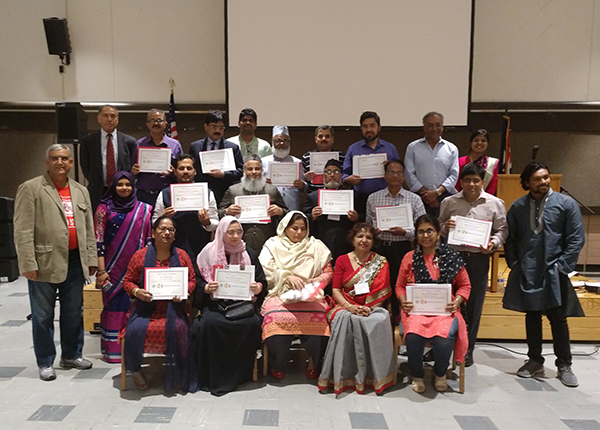 2019 LEAP participants, along with the program's coordinators, at the certificate ceremony at Ohio State.

The success of that program motivated Pradhan, Nahar and fellow colleagues to create the ongoing Center for STEM Education and Research, which is housed at AMU but works in collaboration with Ohio State. Nahar also received U.S. State Department funding to launch the Women in STEM Roadshow in 2018, a series of workshops across India meant to encourage and provide information about education and professional opportunities in STEM to young women and girls. She says continuous reporting shows that the participants are excelling in their studies and research and pursuing higher degrees.

Nahar started organizing these kinds of opportunities in 1995 in Bangladesh, where she created a recognition program for best research publication and a best teaching award at an all-girls primary school. She has since launched similar initiatives in Egypt, India, Palestine and the U.S.

Now, she applies the same positive-incentive approach to the Society of Muslim Women in Science, sharing when members reach milestones, receive awards or finish other accomplishments. So far, her efforts seem to be paying off: Of the five women who participated in this year’s LEAP, four were members of her society.

“Recognition to me works like magic,” Nahar said. “We (need to) support each other.” 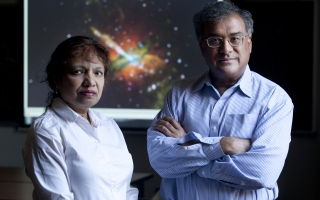