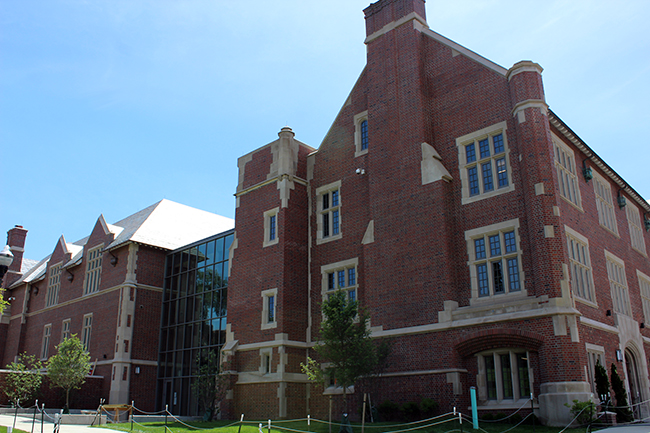 Located in the revived Mirror Lake District, Pomerene Hall has long been an emblem of campus. Its roughly $60 million renovation — most of which was funded by the state of Ohio — is the building’s first major update in nearly a century.

“There was plaster falling from the ceiling in the hallways … in general the building looked and felt pretty neglected,” said Lisa Florman, professor and chair of the Department of History of Art, which was located in Pomerene Hall from 2010 until renovations began in summer 2016.

Built in 1922, the hall originally served as a women’s student union, complete with a gymnasium and a swimming pool. In recent years the iconic building saw little use for its size.

Acock Associates Architects, which headed the design of the renovation, did an amazing job both modernizing the building and respecting its historical character, according to Florman. “The embossed ceilings have been repaired; the interior woodwork brought back to its original luster; and the newly added masonry and brickwork on the exterior are absolutely indistinguishable from the original.”

For the undergraduate data analytics major — now in its fifth year — the renovation provides the program’s first dedicated physical space on campus.

“Because the major is interdisciplinary, the students have never had a space that was their own,” said Brooke O’Leary, academic planning specialist for the data analytics major.

For the first time, they’ll have that space element to make them feel like they have a home on campus and that there’s a place for them to connect.”

The data analytics program was created in 2014 in response to a quickly growing need for versatile data scientists, and, while the program is housed within the Department of Statistics at the College of Arts and Sciences, curricular partnerships exist between the College of Engineering, the College of Medicine and the Fisher College of Business.

Pomerene’s former gymnasium has been transformed into an “Ideation Zone” — a massive collaborative space for the Translational Data Analytics Institute — with movable furniture, meeting spaces and cutting-edge labs for building hardware, testing software and conducting large-scale data simulations. All of these advances lie upon 90 percent of the original wood floor. 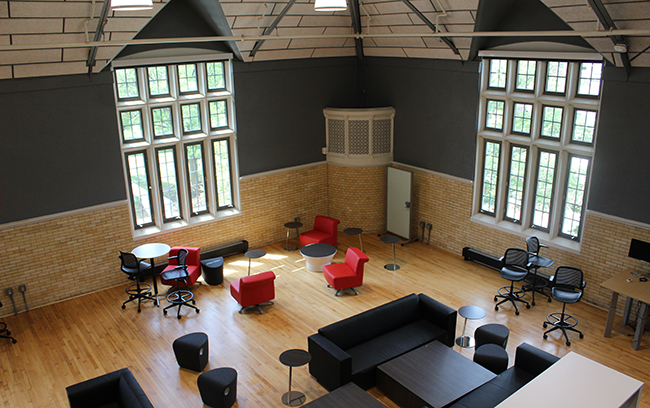 “It was important to at least make a nod to what the space was used for, and so you can still tell that it was a gymnasium,” said Ruth Miller, director of projects for Ohio State Facilities Operations and Development. “I think it’s going to be a dynamic space, and it’s got some excitement to it.” 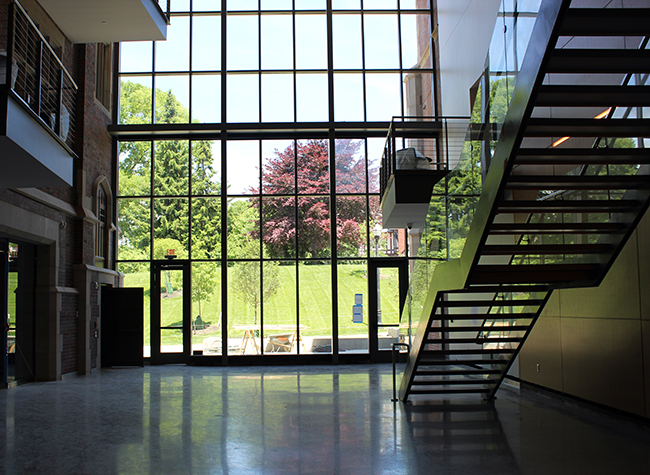 A new, three-story atrium and glass wall serves as a modern intersection between the two main wings of the building.

A portion of the renovation costs went toward other restorations within the Mirror Lake District, including updates to Oxley Hall and the Browning Amphitheater. The finished project is another stepping stone in the university’s Framework 2.0, a long-term vision for the transformation and revitalization of Ohio State’s physical campus to help strengthen Ohio State’s position as one of the world’s most important and effective centers of teaching and research.

“I like to see collaboration between the state of Ohio, The Ohio State University and then between the arts and the mathematical sciences,” O’Leary said. “The new building is beautiful, and for anyone visiting campus it shows the breadth of what we offer here.” 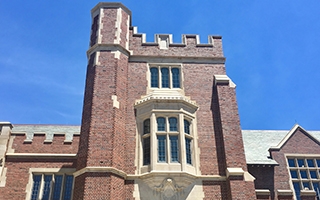