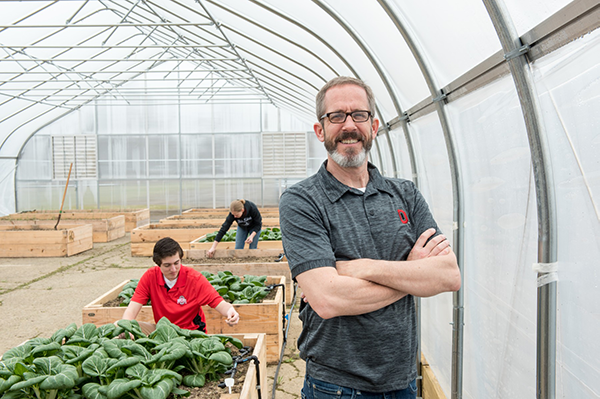 Back in the ’70s, Kip Curtis’ parents embraced the back-to-the-land movement and raised their kids on a sustainable farm, growing their own vegetables, raising their own livestock and generating their own heat.

It was hard work, but it proved to be a formative experience once Curtis, an associate professor of history at Ohio State-Mansfield, became an environmental historian.

“I was this curious environmental scholar who didn’t harbor romantic notions of nature,” he said.

Recognizing the time and grit that go into nurturing sustainable agriculture has been essential to Curtis’ efforts to develop a network of urban microfarms in Mansfield, an initiative that places social justice and equity at the forefront of the project.

“I really understand nature through the lens of labor,” Curtis said. “Our most dependent connections with nature aren’t standing on a cliff looking at a beautiful landscape; they are farming and mining and utilizing it in these ways, and that makes it a really arduous relationship that takes a lot of work.”

With that support, the project has blossomed into nine microfarms, each a new small business that is part of one membership cooperative called the Richland Gro-Op. The cooperative functions as the marketing face of the microfarming network, and together they create new wealth for these farmers and their community.

When Curtis embarked on this project at Ohio State four years ago, he wanted to address two issues he’d seen in sustainable urban farming. The first was an overall absence of social justice in environmentalism, and the second was the tendency for urban farms to stall after their initial launch. 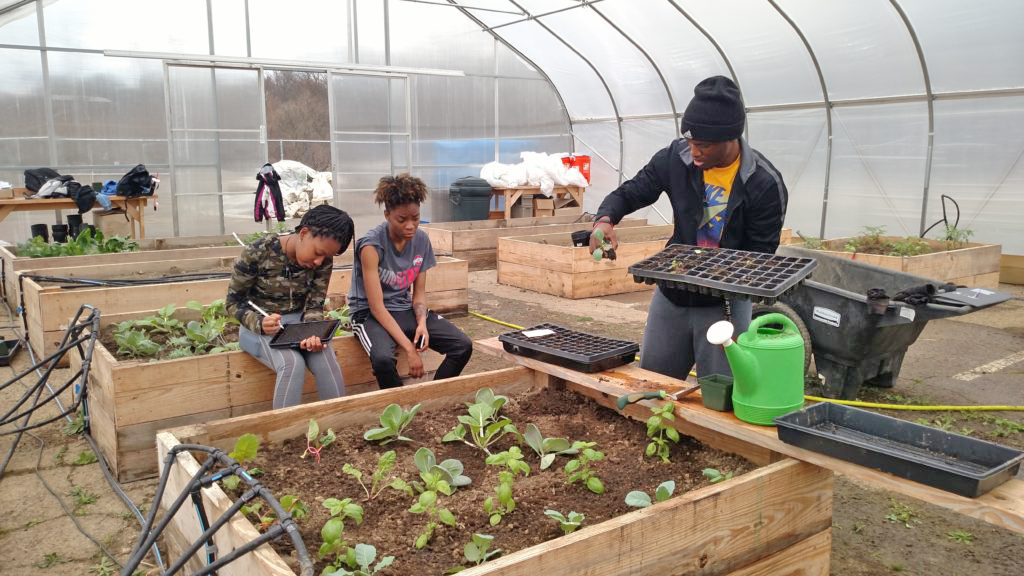 Curtis was looking for the goldilocks farm site — large enough to bring in an income but small enough for a family or individual to operate.

So, the microfarm was born: one-third of an acre with two high tunnels that enable indoor and outdoor multiseason growing with an aim of generating about $50,000 in gross income per year. People would be trained to own and operate their own microfarm, coordinate what they grow through an annual crop plan for the whole cooperative, and then aggregate and sell their products through the Richland Gro-Op.

Mansfield happened to be perfectly positioned to jump into this idea. Community partners like the North End Community Improvement Collaborative and the Richland County Foundation were already working on building more sustainable food systems, launching a local farmer’s market and building community gardens.

“It was about design from the university matching community ambitions,” Curtis said.

Once they had the idea fleshed out, Curtis and his partners started recruiting committed growers, with an emphasis on finding African American and low-income participants. Now, with nine producers dedicated to growing for the cooperative, the project is solidifying its marketing plan for the year ahead to secure a sustainable source of revenue.

Behind narratives is storytelling, which is really about morals, it’s about values,” Curtis said. “We tell stories to get the internal conscience working.”

Part of that strategy is developing a crop plan aligned with known purchasing needs in local households, restaurants and institutional buyers. By matching those needs, the project will be able to balance the desire to get the highest price possible for their products while also selling as much as possible within Richland County.

“The risks are enormous, so the fact that we can through the grant reduce the risks for the producers was huge in getting people on board,” Curtis said. “It really takes a research university to be able to create the environment for this kind of innovation to take place.”

Last year, Curtis was named a faculty fellow with the Office of Outreach and Engagement, through which he will seek to build a replicable model of community engagement and expand the successes found in Mansfield to other small cities in Ohio.

He said he hopes his work in Mansfield has created a story about how such efforts – rooted in community ambitions that develop tangible opportunities for positive change – can help accomplish the goals of sustainability and heal and improve humans’ relationship with the Earth and with each other.

“We see the world imperfectly,” Curtis said. “The scientific method acknowledges that and removes the imperfections to get at a certain kind of knowledge, but it does so resting within a story. That story? That’s what we humanists do. We develop them, we critique them, and we question whether they’re enlisted for the wrong kinds of ends.”

Curtis hopes humanists will embrace their ability to create “histories of the future” like the microfarm project to empower people to be socially just and ecologically sustainable. They have a particular role to play in facilitating the creation of sustainable systems, he said.

“Behind narratives is storytelling, which is really about morals, it’s about values,” Curtis said. “We tell stories to get the internal conscience working.” 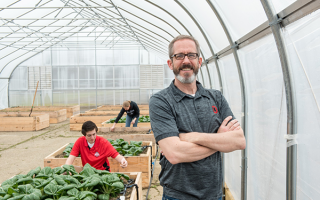