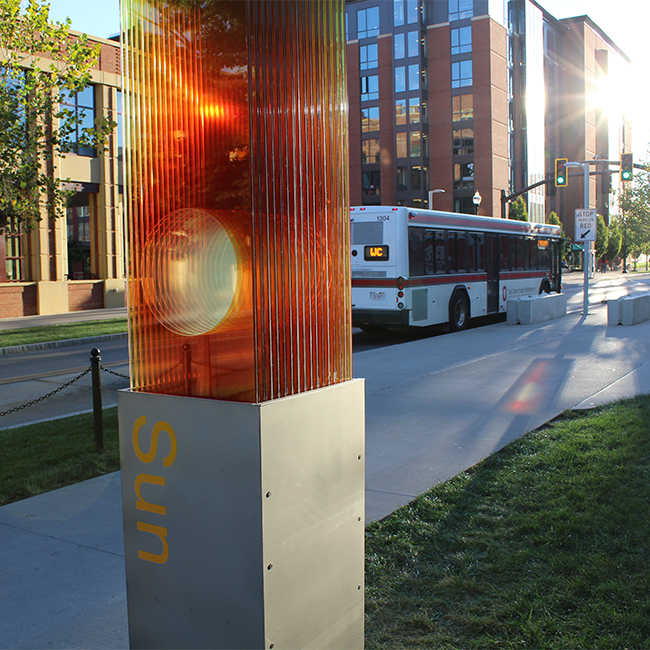 A new cosmic art installation on campus represents our solar system and bridges the arts and sciences in an astronomical way, thanks to a generous gift from M. Andrew (Andy) '64 '67 and Sandra (Sandy) L. Ross '70.

"The Solar System to Scale" comprises 10 mixed-media kiosks that begin with a “sun” kiosk on Woodruff Avenue outside the Chemical and Biomolecular Engineering and Chemistry Building (CBEC) and end with a “Pluto" kiosk near the Chadwick Arboretum Learning Gardens on West Campus. The spacing between the kiosks is a to-scale representation of each planet's distance from the sun.

Supported by a stainless steel base, each kiosk features glass panels colored specifically for the planet it represents, with the east-most panel depicting the sun as a 12-inch circle and the west-most panel signifying the relative size of the planet. ​

Andy and Sandy Ross had their first discussion with the university about their vision to bring “The Solar System to Scale” to campus in July 2015. The idea came from Andy’s fascination with space as a child, he said, recalling how he looked up to the sky one night and asked his dad how close the nearest star was. Since that point, he’s never stopped trying to grasp the size of the universe.

“How fun it is to think about the scope of our universe, both in size and distance,” he said. “We’re so pleased to have been a part of this fun art/science installation.” 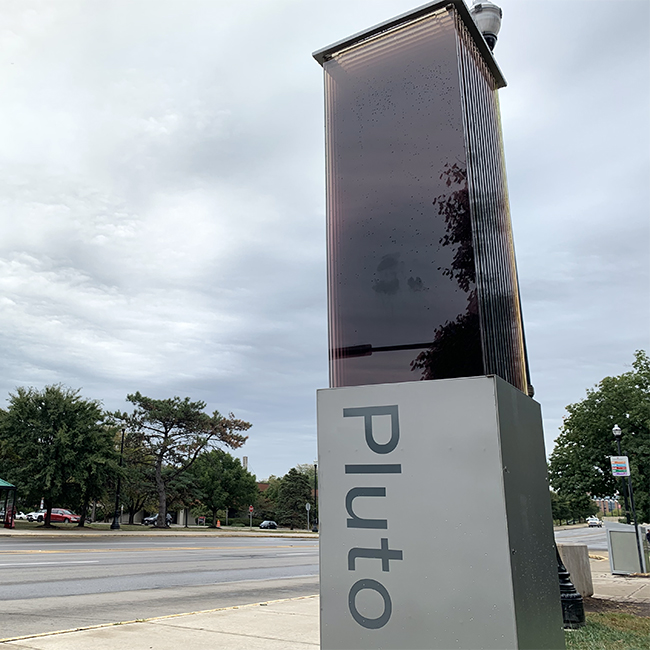 Although Pluto is no longer counted as one of the eight planets, it was included in the installation to represent the dwarf planets and other planet-like objects in our solar system, said Wayne Schlingman, director of Ohio State's Arne Slettebak Planetarium.

“Pluto is a fascinating object in our solar system and we’re learning so much about it right now," he said.

The artwork was designed by North Carolina-based artist Ivan Toth Depeña, fabricated by Ignition Arts and guided by scientific input from Schlingman and other members of the Ohio State Department of Astronomy.

“The play of light on glass affords a different experience during the day than at night depending on where the sun is hitting it, which is very much the case for our solar system,” Schlingman said.

The piece was installed at the end of September and is expected to be fully complete by the end of the year, with each kiosk outfitted with accessibility features providing both visual and tactile experiences, as well as a QR code linking to further information about its planet.

See and celebrate the new installation on Saturday, Oct. 19, at a public event hosted by Friends of Ohio State Astronomy and Astrophysics.

The Rosses hope "The Solar System to Scale" will serve as a learning tool not only for Ohio State students, but also local K-12 classes and community groups.

"It's hard to imagine that if the Earth were the size of a pea, then the separation from the sun to Pluto would be the distance from Koffolt Laboratory to the Chadwick Arboretum," Schlingman said. "But that's how big our solar system is, and the distance to the next nearest star is 5,000 times further still. We'll be using these sculptures to inspire and teach our students for decades to come."

"The Solar System to Scale" was made possible with partnership from Braun & Steidle Architects, Glasmalerei Peters Studios, Advanced Engineering Consultants and the Gilbane Company.