Veeam® Software Corporation, co-founded by arts and sciences alumnus Ratmir Timashev (MS, chemical physics, 1995) and his partner Andrei Baronov, has made a gift of $5 million to the College of Arts and Sciences targeted to student scholarships and teaching in chemical physics and data analytics.

The endowments from Veeam include:

“The extraordinary generosity of Veeam will transform research and teaching in chemical physics and the college’s new program in data analytics,” said David Manderscheid, executive dean and vice provost for the College of Arts and Sciences. “The greatest institutions have the best minds, the most-innovative researchers and inspiring teachers.

Establishing a chair in data analytics and a professorship in chemical physics will go a long way in enhancing the reputation of the College of Arts and Sciences and The Ohio State University.”

Veeam is the innovative provider of solutions that deliver Availability for the Always-On Enterprise™.  Veeam leverages virtualization, storage, and cloud technologies that enable the modern data center to help organizations save time, mitigate risks, and dramatically reduce capital and operational costs. Privately-held, the company’s worldwide headquarters are in Baar, Switzerland, with the North American headquarters in Columbus, Ohio, along with offices throughout the world. Veeam Software Corporation, Veeam’s US subsidiary, will make the gift. Timashev co-founded the company in 2006 and today, as CEO, leads a company with more than 2,000 employees and 183,000 customers worldwide.

“We are a forward-thinking company that fuels innovative IT solutions for enterprises around the world,” said Timashev. “Our goal in endowing these funds to the College of Arts and Sciences is to enable students and faculty to become the next generation of innovative thinkers, problem solvers and providers of solutions.”

Born in Russia in 1966, Timashev studied physics at the Moscow Institute of Physics and Technologies, the top science school in Russia.

“Being a scientist was a prestigious profession in Russia when I was working on my degrees in the late 1980s,” said Timashev. “But then Perestroika happened, Russia’s economy collapsed and it became impossible to make a living as a scientist.”

Timashev went to work selling computers and doing construction work to support his family while still working on his PhD, but his dream was to become an entrepreneur.

Timashev enrolled at Ohio State in 1992, having been recruited by Terry Miller, who chaired the chemical physics program at the time. Miller, an Ohio Eminent Scholar and now-professor emeritus of physical chemistry, remained a trusted mentor during Timashev’s time at Ohio State.

In 1995, Timashev started his own business, Aelita Software. At the same time, he asked his best friend from home, Andrei Baronov, to join him in Columbus and help him run the company. After seven years of leading the company, alongside Baronov, to virtually double-digit growth each year, the company was sold to Quest Software for $115 million. Timashev then invested his own money and co-founded Veeam in 2006. With no traditional venture capital funding, Veeam is set to achieve $1 billion in revenue within the next two to three years.

“Veeam’s remarkable gift will have a very real and direct impact on Ohio State’s students and faculty,” said Miller. “Their passion and vision to expand access to science and technology for our students, and, at the same time, enhance the depth and quality of teaching and scholarship, will open doors to new ways of thinking. Ratmir Timashev serves as a tangible inspiration and example to students who earn degrees in areas like chemical physics of the future opportunities for them in science, technology and beyond.” 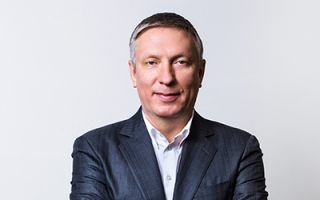