The World Of Harry Potter Comes to Campus

For the past three years, the Center for Medieval and Renaissance Studies (CMRS) has hosted its Popular Culture and the Deep Past conference series. Each year, the conference has a specific theme that connects a current popular culture topic with its medieval history. Previous themes have included Game of Thrones, Lord of the Rings author J. R. R. Tolkien and Shakespeare. This year’s theme is The World of Harry Potter, and the event takes place on Feb. 24 and 25.

The director of CMRS, Graeme Boone, manages the annual series. The concept for the event began when he was thinking of a way to bring the Ohio State and Columbus community together. He says the conference not only is a good way to get the public more involved with the university, but it also creates deeper connections between students, faculty and staff.

Boone described Popular Culture and the Deep Past as a “conference carnival.” These events incorporate academic elements, but also fun and entertainment. People from all over the world have attended past years’ events to present academic papers and each year the event grows in popularity.

The World of Harry Potter will feature John Friedman, emeritus professor from the University of Illinois as the keynote speaker on Friday, Feb. 24. He will discuss J.K. Rowling’s use of magic animals in Harry Potter and their origins in medieval literature and antique mythology. Following Friedman’s lecture, a reception from 6 to 8 p.m. in Orton Hall will feature Potter-themed ales and food. The reception will mimic the “Beastly Bash” held at the Gateway in November.

There will be a variety of academic papers presented, including Classical Myth and Medieval Bestiaries in Harry Potter, Dumbledore and Merlin: Parallels between Two Famous Wizards, Music in Harry Potter's World and Staging Magic, from Shakespeare to Harry Potter, to name a few.

A Commedia Dell’Arte Troupe from Cleveland will be performing an hourlong comedy play about what life would have been like for wizards. In addition, there will be combat, dancing, culinary demonstrations, cosplay, falconry and an exhibit of medieval books and manuscripts all relating to Harry Potter.

This event is free and open to the public. For more information, visit the Center for Medieval and Renaissance Studies website.

Forget you’re a muggle for a while & join @osu_cmrs for their event on The World of Harry Potter, 2/24-25 #ASCDaily 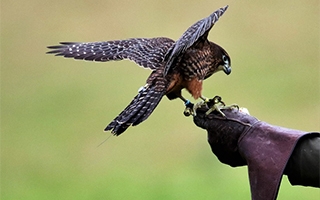