Dee Boersma has been called the Jane Goodall of penguins.

An adorably curious, roughly 2-foot-tall Magellanic penguin she’s named Turbo greets her year after year on the shores of Punta Tombo, Argentina, where Boersma has studied the health, behavior and population dynamics of penguins like Turbo for nearly 40 years. 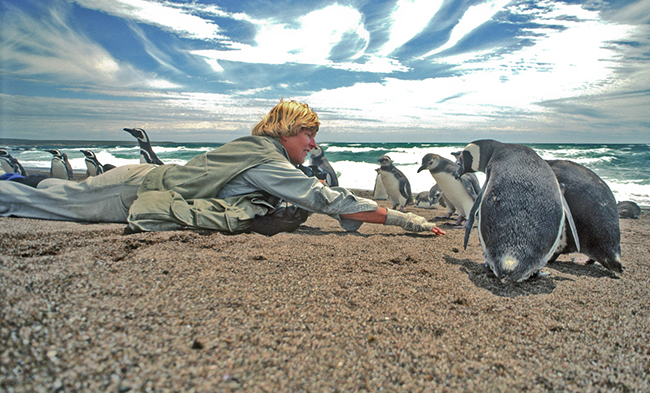 Boersma’s work with both Magellanic penguins and Galapagos penguins has led to an enormous, invaluable archive of species data and the creation of Marine Protected Areas in both Argentina and Ecuador. She has built nests out of lava rock in the Galapagos Islands to increase penguin reproduction; convinced the Argentinian government to move oil tanker lanes farther offshore, considerably decreasing the occurrence of oiled birds; proven a link between climate change and the declining population of Magellanic penguins; and tirelessly worked to spread the message about wildlife conservation.

And it all started at Ohio State.

Despite growing up in Ann Arbor, Michigan, in a family of University of Michigan alumni, Boersma shed her Wolverine identity and became a Buckeye to earn her PhD in zoology, in large part thanks to late zoology professor Paul Colinvaux.

“When I was looking at graduate schools, I knew I wanted to go to the Galapagos Islands, and Paul was doing climate change research there,” said Boersma, recalling that she wrote specifically to Colinvaux before applying to the university. “Few people were doing work in the Galapagos Islands at that time, but Ohio State gave me that opportunity, and Paul, because women weren’t doing those sorts of things then, but Paul encouraged and supported me.”

After completing her dissertation on Galapagos penguins, Boersma graduated in 1974 and soon began her academic career at the University of Washington, where she is currently the Wadsworth Endowed Chair in Conservation Science and director of the Center for Ecosystem Sentinels.

Twice a year for the past decade, she has returned to the Galapagos Islands to check up on the endangered Galapagos penguins, which are the rarest penguin species in the world, with only approximately 2,000 left in the wild.

“It’s amazing the changes that have occurred in the past 50 years,” Boersma said. “They’re not necessarily bad changes, but if you’re really interested in the natural world, there are certainly some significant diminishing returns on what we get to see in terms of biodiversity and natural habitats.” 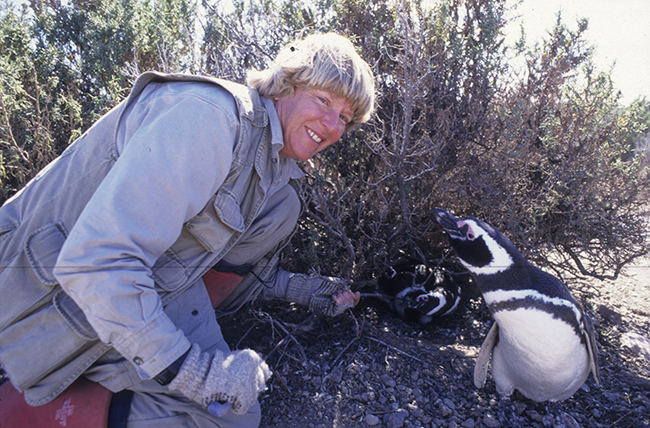 In 1982, she also began working with Magellanic penguins on the coast of Punta Tumbo, Argentina. While the Magellanic species is more plentiful than its Galapagos counterpart, the penguins have struggled to thrive amid oil dumping, food competition from fisheries and increased rainfall induced by climate change.

“Penguins live in deserts. They don’t like to live in places where it rains,” Boersma explained. “Chicks are all fuzzy covered in down, and when their feathers get wet, no longer do the feathers insulate them. So if little chicks get wet, they become hypothermic and they die.”

Despite some major wins, both the Magellanic and Galapagos penguin populations Boersma studies have significantly declined over the past several decades. In addition to battling oil pollution, rising temperatures and increased rainfall, the penguins are having a harder time finding food and must swim longer distances as mates and chicks wait starving at the nest.

Luckily, penguins are equipped with some serious swimming skill. In the water, penguins can reach speeds up to about 18 miles per hour, and during long journeys can sustain speeds of around 4 miles per hour, sometimes travelling more than 100 miles in 24 hours. 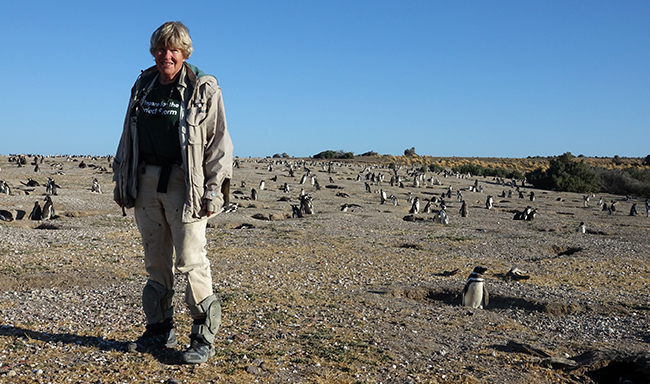 One way she hopes to continue saving penguins is through the Center for Ecosystem Sentinels, which was founded in 2005 and views animals like penguins, sharks and whales as sentinels — or early-warning signs — of natural and human-caused environmental changes.

“I really wanted to build a place where people will continue to look at what these animals tell us about the environment and hopefully make us do better things so that the world will be better for people, as well as penguins, whales and sharks,” she said.

From penguins to PSAs

Penguins aren’t her only passion. Boersma is also dedicated to training the next generation of conservation biologists and to helping the world at large get excited about conservation. Her science communication course at the University of Washington focuses on video storytelling, and students learn to create documentary shorts and PSAs using the wealth of wildlife footage she’s acquired over the years. Watch their videos >>

The Center for Ecosystem Sentinels has also been key to training students, Boersma said.

This drive to ensure the continuation of conservation biology led Boersma to endow a professorship in natural history and conservation at the University of Washington.

“Universities are really important, and faculty positions are becoming more and more scarce,” Boersma said. “There’s an awful lot of money in cancer research, Alzheimer’s and so on because we all like to live longer, but I think that the natural world enriches our lives the most, and that people will be mentally healthier and physically healthier if they pay attention to it.” 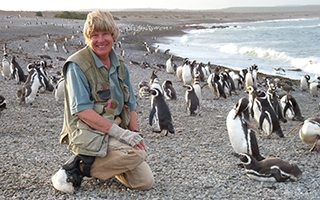