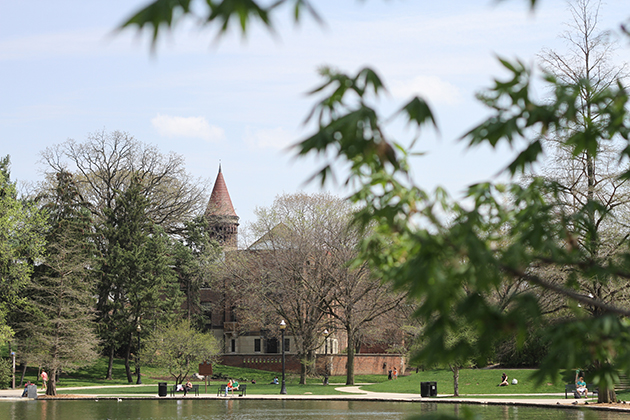 The Ohio State University Department of Comparative Studies is a multi-disciplinary community of scholars who study how human societies organize themselves through the production of knowledge, discourses and material practices. The department addresses processes of cultural interaction, with particular attention to the dynamics of knowledge, power, authority and cultural difference.

Comparative Studies raises questions that help us understand how culture shapes the lives of individuals and groups.

The faculty in the Department of Comparative Studies are committed to social justice, and energized by critical questions about how justice is to be defined and how it can be realized. Students are encouraged and supported to become effective global citizens, guided by an ethos of mutual respect and persistent questioning, and recognition of the value and pleasures of critical intellectual work.

One of the central goals of comparative studies, in its long history as a center for interdisciplinary humanities, has been to foster collaboration in research and pedagogy across disciplinary, departmental and college lines. Some of our valued networks include:

The institute facilitates emergent research collaborations between humanities faculty and others across the university, and to enable the humanities to act as a significant bridge to the university and the city of Columbus as well as the broader public culture.

The Center for Folklore Studies supports the learning, teaching, research, and public service endeavors of folklorists and students of folklore.

Center for Study of Religion

Research from this center emphasizes the dynamic aspects of religious systems and the importance of studying them within carefully nuanced understandings of the larger social and cultural contexts in which they exist.

The curricular programming in Asian American Studies, Latino/a Studies, and comparative ethnic and American studies in the department holds a mutually supportive relation with the programming and services offered by the Multicultural Center and Ethnic Student Services.

Wexner Center for the Arts

Religious Soundmap of the Midwest Project

Assistant Professor Isaac Weiner was awarded $30,000 from Humanities without Walls, a consortium of humanities centers at 15 Midwestern research universities, for his “Religious Soundmap of the Midwest” project. The project will use audio recording and digital mapping technology to study the religious diversity of American cities. Student researchers will produce audio recordings of religious practices across a wide range of local sites.

These recordings will be integrated along with interviews, visual images and explanatory texts onto a publicly accessible, online mapping platform, which will provide a valuable research tool and pedagogical resource for specialists and non-specialists alike. The project is being headed by Weiner and Amy DeRogatis at Michigan State University.

The Science and Technology Studies minor provides students with the tools to understand and evaluate both the social contexts and consequences of scientific and technological developments.

The religious studies minor employs an academic approach to religion, stressing its role as an important dimension of human experience in different cultural contexts. (RELSTDS-MN)

Folklorists focus on a broad spectrum of social expression, examining the forms and ways of living through which communities shape their reality. Those forms include language, work, food, play, dance, song, gestures, beliefs, and so forth. (FOLKLOR-MN)

The Comparative Studies minor teaches students to investigate how cultures shape the lives of individuals and groups. The program's core concepts are interrogating cultural similarities and differences.

American Indian Studies is an interdisciplinary field of study that focuses on the histories, experiences, languages, arts, and cultures of peoples indigenous to the lands that now comprise the United States. It seeks to broaden understanding of and make connections between Native peoples and cultures in the U.S. and Indigenous peoples across the Americas and around the globe. (AMINSTD-MN)

Graduate work in Comparative Studies is interdisciplinary and cross-cultural, addressing complex processes of cultural change, stability, and interaction, with particular attention to the construction of knowledge and the dynamics of power and authority. (MA, PhD)