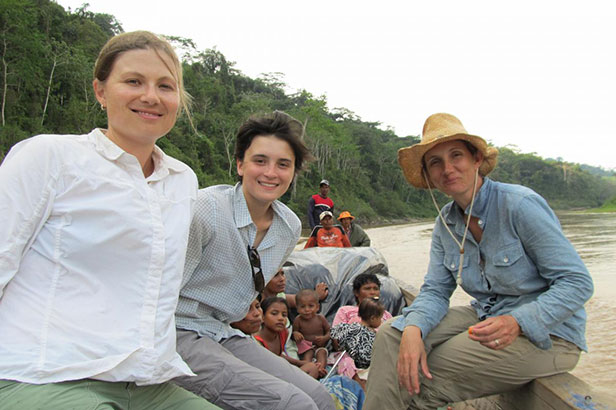 The Ohio State University Department of Geography is ranked 5th in the United States and is internationally renowned. It supports four official concentrations to organize undergraduate majors and graduate studies: Urban, Regional, and Global Studies; GIS and Spatial analysis; Atmospheric and Climatic Studies; and Environment and Society.

The Department of Geography has been offering undergraduate instruction since 1907

A River Tale: Protecting a Tawahka Way of Life

Kendra McSweeney, associate professor, was recently honored by Honduran Secretary of the Indigenous Pueblos, for her work on behalf of the Tawahka Amerindians of Honduras. McSweeney and partners Project Corazón Muihka, Alianza Verde (Green Alliance), and the World Bank, are implementing actions of cooperation and coordination to assist the Tawahka pueblo in its efforts to create ecotourism and combat environmental encroachment and narco-trafficking. Working alongside McSweeney throughout this project are Zoe Pearson and Sara Santiago, doctoral and undergraduate students, respectively.

The Department of Geography is home to three University Distinguished Scholars, three Distinguished University Professors, a Guggenheim and Fulbright Scholar, and three current or former editors of major disciplinary journals. In addition, its junior faculty is widely recognized as one of the most promising groups of young scholars in the discipline.

Daniel Sui, professor and chair, will be leading Ohio State’s State, Regional and Urban Development Center, a newly-designated Center for Excellence by the Ohio Board of Regents. The Center will address critical needs of Ohio’s cities and regions in planning and expanding the infrastructures that support them.

One of eight university research centers in the Ohio Urban University Program (UUP), the State’s foremost urban public policy and economic development resource. Center faculty collaborate with partners around the globe to study issues ranging from the dynamics of urban housing foreclosures, bioterrorism preparedness and response planning, and environmental impacts of accelerated urbanization to the implications of pervasive surveillance.

A joint project of Ohio State’s Department of Geography, Ohio University, and the U.S. Forest Service. This interdisciplinary study aims to analyze the trajectory of forest growth in southeast Ohio, and determine the factors that have allowed reforestation to occur in the region. Among the issues being addressed by the group are resettlement vegetation, remote sensing and land cover, hydrologic impacts of abandoned mine lands, land parcelization, forest fragmentation and historical land ownership records for the Appalachian Ohio region.

Geography is a unique discipline that integrates knowledge across the social and natural sciences to provide robust ways of understanding our world. The geography minor is intended to accommodate the interests and the needs of students from a variety of areas who want to develop a coherent educational program from the courses offered. (GEOG-MN)

The curriculum of the GIScience minor is based on that of the GIScience major, which includes a diverse range of courses that can be selected by students to count toward the proposed minor degree. These classes will provide students with extensive experience in mapping, geospatial analysis, geospatial modeling, environmental modeling, and statistical methods. (GIS-MN)

Graduate work in Geography Atmospheric Science with specialties in Environment and Society, Atmospheric and Climatic Studies, GIS and Spatial Analysis, Urban and Regional, and Global Studies. The program is a leader in placement of tenure-track faculty in significant positions both in the U.S. and internationally. (MA, PhD)