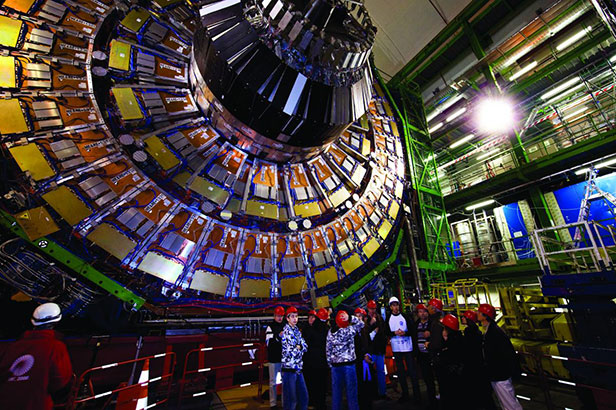 The Ohio State University Department of Physics is one of the university’s largest and most diverse departments conducting world-class research. It is a top-25 physics department in the country, providing the fundamental core curriculum for all of the sciences at Ohio State.

The Large Hadron Collider, at the European Organization for Nuclear Research (CERN), is the world’s highest energy accelerator used by physicists to study the smallest known particles—the fundamental building blocks of all things. It is made up of intersecting rings 27 km in circumference and spans the border between Switzerland and France about 100 meters underground.

Ohio State is the only institution in the United States collaborating on three of the four largest LHC experiments, ALICE, ATLAS and CMS, to analyze the myriad of particles produced by the collisions in the accelerator.

Astronomy and physics professor Christopher Hirata is the first faculty member from Ohio State to receive a New Horizons in Physics Prize, an award given alongside the annual Breakthrough Prizes, which have come to be known as the “Oscars of science.” Hirata received the prize in recognition of his “fundamental contributions to understanding the physics of early galaxy formation and to sharpening and applying the most powerful tools of precision cosmology.” His work focuses on dark matter and dark energy, which are believed to control how galaxies form and how the universe expands, and his research has drawn together elements of big data, device engineering and theoretical physics.

The Science Center for Advanced Research on Lasers and Engineered Targets. We are one of only a handful of universities in the nation to have such an ultra-intense laser facility. The faculty in the High Energy Density Physics group focuses on experiments using basic laser physics that will help advance breakthroughs in fusion energy, cancer therapy and national security.

SCIENTIFIC THINKERS AT INNIS ELEMENTARY SCHOOL (organized by CEM)
The Scientific Thinkers program is designed to be a continual effort at Parkmoor and Innis Elementary Schools, and Mansion Day School, Columbus elementary schools, to bring scientists into first through fifth grade classrooms. This program strives to help the students at these schools enjoy science and gain confidence in their abilities as students and scientific thinkers through a collaborative effort of teachers and Ohio State students teaching inquiry-based science.

There are three main aspects to the in-class methods-Meet a Scientist, Be a Scientist, and Learn about other Scientists. These are realized through weekly classroom visits by volunteers from the Department of Physics and other science and engineering departments.

BREAKFAST OF SCIENCE CHAMPIONS
The Center for Emergent Materials and the Center for Cosmology and AstroParticle Physics team up as students and teachers from local Columbus schools explore hands-on activities including magnetism and computer activities as well as comets and other astronomy related activities. Participants begin the morning by having breakfast with scientists and a visit to the planetarium; the rest of the morning is spent engaging in hands-on science activities.

CENTER FOR COSMOLOGY AND ASTROPARTICLE PHYSICS (CCAPP)
Houses leading efforts in studies of dark energy, dark matter, the origin of cosmic structure and the highest energy particles in the universe.

THE CENTER FOR EXPLORATION OF NOVEL COMPLEX MATERIALS (ENCOMM)
ENCOMM is an interdisciplinary center with the goal of nucleating, fostering, and supporting collaborative teams in the area of materials research at OSU. ENCOMM's mission is carried out through three principle activities:

Students whose career goals lie in directions other than physics have often expressed interest in physics and a wish for greater exposure that what can be provided in the introductory physics sequence. The physics minor program allows students to gain additional exposure to physics topics such as mechanics, electromagnetism, optics, quantum mechanics, or nanotechnology. (PHYSICS-MN)

Astronomy and Astrophysics is the study of planets, stars, and galaxies, and the universe as a whole, including how these originate and how they evolve in time. The principal pursuits of the astronomer are to extend our understanding of the physical nature of the universe and to convey this understanding to students and the general public.

The Department of Physics has designed the graduate program to give you a solid background in the fundamentals, an understanding of the major fields of current research, and an opportunity for in-depth investigations. Working with your faculty advisor, you can tailor your program to meet your own needs and interests, taking into account your particular goals and undergraduate preparation. (PhD)