Abraham Badu-Tawiah and Steffen Lindert, assistant professors in the Department of Chemistry and Biochemistry, have been named recipients of the 2020 Alfred P. Sloan Research Fellowships. The annual honors are awarded to early-career scientists from across the U.S. and Canada whose achievements mark them as among the most promising researchers in their fields.

The two-year, $75,000 fellowships are granted by the Alfred P. Sloan Foundation to scientists in eight fields: chemistry, computer science, economics, mathematics, computational and evolutionary molecular biology, neuroscience, ocean sciences and physics. Candidates are nominated by their peers, and winning fellows are selected by independent panels of senior scholars.

Badu-Tawiah’s research focuses on accelerated droplet chemistry, which allows fast reactivity for screening and analytical applications. His contributions span interfacial chemistry, microfluidics and biomedicine and have the capacity to revolutionize the field of chemical detection for applications including early diagnosis and public safety.

“It is a great honor to be counted among the 2020 Sloan Fellows,” Badu-Tawiah said. “This award represents a new beginning for my research group. It will allow us to expand our efforts from asymptomatic malaria detection in the developing world to early diagnosis of cystic fibrosis, which affects only 30,000 people in the United States. This expansion is significant because it shows a strong commitment to the underserved communities, which are often ignored in the technology race.”

“I feel extremely honored to receive such a prestigious award,” Lindert said. “This fellowship will allow my group to develop novel tools that I hope will one day transform integrative protein structure modeling using different kinds of sparse experimental data.”

Badu-Tawiah and Lindert join 124 other 2020 Sloan Fellows, as well as 55 past Sloan Research Fellows from Ohio State since 1955.

“To receive a Sloan Research Fellowship is to be told by your fellow scientists that you stand out among your peers,” said Adam F. Falk, president of the Alfred P. Sloan Foundation. “A Sloan Research Fellow is someone whose drive, creativity and insight makes them a researcher to watch.” 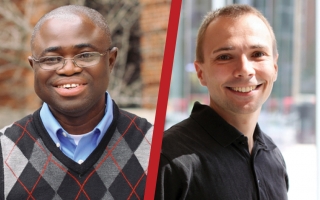