Sanjeevi Krishnan has been at Ohio State just one year and already his research is attracting attention — and funding. His new three-year, $509,998 grant from the Air Force Office of Science Research (AFOSR) Award is an enormous boost to his research program in algebraic topology. Krishnan readily answered questions about the implications of the grant, his research and Ohio State’s appeal — and shares a bit about himself.

How will the AFOSR Award impact your research?

The grant provides for a postdoc, grad summer support and tons of visitors. The goal of the grant is to develop promising connections between topology, logic and dynamics, and to do that, the research definitely requires experts in all of these areas as collaborators.

Can you describe your area in terms accessible to the not necessarily math-literate?

My general area is algebraic topology, which studies qualitative features (like the number of holes) of geometric spaces (like circles, doughnuts and spheres). One of the original motivations of topology was to discern the qualitative behavior of complex systems, such as planetary orbits, by studying the topology of their spaces of states, such as planetary positions. I'm interested in refining the subject to take into account directionality, such as the flow of time, so often implicit in state spaces. My goal is to discern a bit more of the qualitative behavior of complex systems of interest today — think: massively parallel computers.

What attracted you to Ohio State and to the math department, specifically?

Ohio State's math department has an unusually large number of algebraic topologists — applied, pure and both. It's especially a great place to be right now in applied algebraic topology, with lots of connections in the computer science department and at the MBI (the NSF-funded Mathematical Biosciences Institute).

Where are you from, originally?

The suburbs of Detroit.

How did you get interested in math and in your area of math?

One day, my freshman calculus professor patiently obliged me and explained his area, algebraic topology, outside of class. It seemed so exotic, so unlike calculus. One thing soon led to another, and he very graciously offered to mentor me in it. I got hooked.

I love that my wife, Dena Asta, works just a few minutes away. She's an assistant professor in the statistics department. (Asta, who received her PhD from Carnegie Mellon University in 2015, studies geometric approaches to network inference and non-parametric non-Euclidean methods.)

What do you like to do when you’re not doing math? 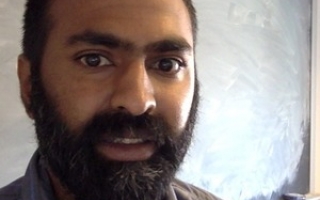