Ahead of free conversation, Coyote Peterson reflects on time at Ohio State 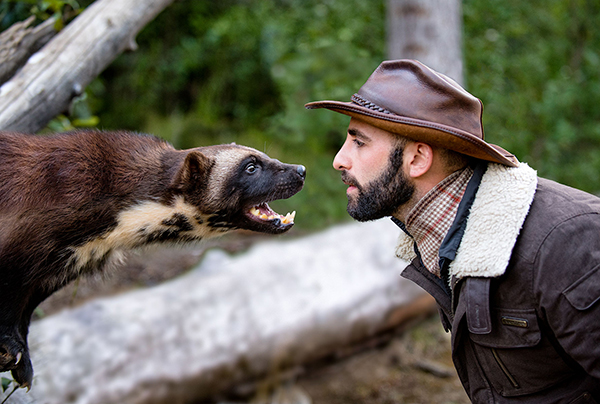 Like any true Buckeye, Coyote Peterson stares down wolverines.

Since he started his Brave Wilderness channel back in 2013, Nathaniel “Coyote” Peterson has become one of the world’s most popular YouTubers. Often racking up millions of views on his videos, Peterson uses his infectious personality to bring nature to viewers at home. His videos are informative and heart-racing, including his most popular posts where he gets stung by some of the planet’s most terrifying and painful insects.

Peterson began his journey to fame in Newbury Center, Ohio, outside of Cleveland. After attending Ohio State and graduating in 2004 with a film studies degree, Peterson worked tirelessly for more than a decade before Brave Wilderness took off. Ahead of his free panel discussion with the university on Oct. 14, Peterson sat down for an interview with the College of Arts and Sciences to discuss his time at the university and what’s next for Brave Wilderness.

What are some of your most fond memories of attending Ohio State?
Coming out of a small-ish high school to a massive university was an extreme jump for a kid who grew up in the country. That was very exciting right from the get-go. But when it comes to the academic side of things, what I remember most fondly is just how open-minded the university was to me pursuing a career that I felt was the right thing for me. I originally came in as a business student, but when I got into classes, I realized it wasn’t stimulating me from an intellectual perspective. Not that they weren’t good classes, but it wasn’t a direction I wanted to go. My experience in my freshman dorms watching Buckeye TV, a closed-circuit channel that played tons of old, classic movies, was where I realized I wanted to make people feel the way I was feeling when I was watching these movies. Whether it’s laughter, sadness, happiness, excitement, fear, I wanted to know how a director made an audience feel that way. So, I started to pursue a career in film and television. At the time Ohio State didn’t have a major in that field, but they allowed me to create a personalized study program and basically design my own major.

Was that a difficult process, designing your own major?
At first it seemed overwhelming to be cut loose and start cobbling together classes and put together my own curriculum. But I’m an organized and determined person, so once I started digging into it, it was honestly super simple, and maybe that’s because I was so dedicated to it, but I really enjoyed the process. It also came from having solid advisors in the different colleges and different professors who signed on to help.

Did you have any particular professors or courses that made you realize that you made the right choice switching to film studies?
There was a professor at the time in the theatre department named Joy Reilly. I met her taking an Intro to Theatre class, and she invited me to come to this improv session she was hosting for some other kids who wanted to be in the theatre department. I ended up coming to that even though I had done no improv before and had no interest in being an actor. But, if I wanted to be a director, I felt I really needed to understand what it took to be an actor. She embraced me with open arms and was very encouraging.

Then I got involved with another professor named Dan Board. Dan ran the video department, which was tiny. He literally had an office that was a converted broom closet. I connected with him, got in some of his video classes, and everything took off from there.

What lessons do you still use from your Ohio State education?
I actually still own all of the film and video books that I purchased for classes. They’re all still on my shelves. All my original film and video production books, my film theory class books, screenwriting books. I use them today. If I’m writing and I forget something, I’ll go back and revisit them. It’s my personal library archive of what essentially made me from a film and video producing standpoint.

At Ohio State, you met Mark Vins, who became your business partner and is now the CEO of your company, Brave Wilderness. What was it about Mark that clicked with you right away?
Buckeye TV was in its infancy stages, being run in the basement of the theatre building. I got myself in a position to executive produce and write on a couple of different Buckeye TV projects. I put out a call for people who wanted to work on a TV crew, and Mark was one of the people who showed up for that initial crew call, and we became buddies very quickly after that. We’re like-minded in the way that our gears are constantly grinding like, “What’s the next project?” We were off to the races after that with developing television concepts and eventually a feature film.

Back when you were in school and graduated in 2004, “YouTube celebrity” wasn’t a thing. YouTube didn’t even exist until 2005. So, what was your original career goal?
Right out of college, I went straight into trying to develop an independent film. I started a company, I had a couple feature film scripts that I had written while in college. I developed relationships with some executives in California. I got very close to having a $5 million independent film financed that ended up falling apart in the contractual stages, which was pretty frickin’ heartbreaking for a kid fresh out of college. Long story short, it didn’t work out.

But in the same time frame, I started developing this concept for an animal adventure series. I always loved animals, though I didn’t focus on that much in college. Steve Irwin had passed away [in 2006], so that was in the back of my head. I wondered when they were going to create a new animal adventure concept. Then “Man vs. Wild” with Bear Grylls came out, and I was like, “Man this is exactly what I want to do.” But Bear Grylls is killing and eating the animals whereas Steve Irwin was promoting education and conservation. So, myself and a few other friends from Ohio State started developing this animal adventure concept. It was in development from 2008-13, and then in 2013 I got my first bit of funding that became the Brave Wilderness channel. There was this pretty big window where it was all development. A lot of practice, prototyping, experimentation that never made the light of day. They say it takes 10,000 hours before you perfect something, but it was more like 25,000 hours before we launched our first concept.

Was there ever a time during that long development window where you almost gave up on it?
So many times. We would land a tiny bit of investment to develop something and pitched almost every television network between 2010 and 2013. We were close at one point to a deal with the Columbus Zoo and Jack Hanna’s production company that was going to be a Saturday-morning ABC television series. But that fell apart again at the contractual stages. At that point we literally got down to our last $1,000. Mark and I spent that money on two airplane tickets to Santa Monica, California, and went to something called Real Stream where people go and pitch concepts for the digital space. We made a couple of the right connections that essentially got us the opportunity to produce the first content we launched on YouTube.

Well it obviously worked out, and you’re one of the most famous YouTubers out there. What’s been your reaction to achieving widespread fame, especially among a younger demographic?
It’s always a very flattering, very humbling thing. I’m always the first to remind people that I don’t consider myself a celebrity, and I think “celebrity” has become such a weird term these days. I’m not a Brad Pitt or Leonardo DiCaprio. I’m not a movie star by any means. There’s movie celebrity and YouTube celebrity. So many people watch YouTube on a daily basis, especially the younger generation. I have a 12-year-old daughter in seventh grade, and everybody in her school knows who I am. But if you hold up a picture of Robert De Niro, kids are gonna be like, “A guy who kind of looks like my grandpa?” Nobody recognizes these true icons in this younger demographic.

At the end of the day, I’m really trying to focus on this opportunity to speak to a younger audience, whether people want to get involved with animals or conservation or if they want to be filmmakers. I may be the guy in front of the camera, and I do love animals, but it’s really filmmaking that is my true passion. I don’t think people realize how involved I am with the whole process. It ties back to my relationship with Ohio State. Ohio State gave me all of those building blocks that I needed to set the chessboard. That chessboard is the same whether you’re making a movie or an episode for a YouTube channel. You have to know all the ins and outs, how all those equations add up to get you your finished product.

You’ve continued to grow Brave Wilderness from a YouTube channel to include tours, books, and an Animal Planet TV series. What other avenues could you see Brave Wilderness expanding to in the future?
We put a lot of foresight into what we’re going to do. 2020 was a very interesting year for us. While a lot of people went through some incredible hardships, our business did exceptionally well amid COVID primarily because people were at home watching the internet. We produced a television series for Animal Planet in 2019, and that gave me the ability to step up my production value. While I was very proud of it, what I ultimately learned is that cable television – it’s not dying, it’s dead, man. We will not be producing any more content for a cable outlet. If you’re not part of a streaming service or distribution on YouTube, forget about it. Coronavirus allowed us to dig into our business, pare back a little bit and dissect what things are most important moving forward. It allowed us to set up for 2021 in a way that we’re very excited.

I can promise you the episodes coming out between October and December are probably the best content we’ve produced since the birth of the channel. It’s a big promise, but it will deliver.

Do you have any recommendations for people in Central Ohio to get out and explore nature?
I’m a huge advocate for Columbus Metro Parks. I do a lot of research at the different parks with regard to some of the different reptile and amphibian populations that thrive there. The thing I love is that it’s free to everybody. You don’t have to pay anything to enter into their completely natural environments. Go out, explore, stick to the trails. Some of them have trails where you can get so far lost in nature that it doesn’t even feel like you’re on a trail anymore. That gives you the opportunity to truly see some of our native wildlife in a natural environment.

I’m always an advocate with seeing animals in their natural world. Ohio has so many incredible and really safe species. That’s one of the things I love about Central Ohio: There’s nothing venomous, you’re not going to get attacked by something. When it comes to people being afraid to go out and explore nature, Ohio is about the safest place you can do that, and Columbus Metro Parks are my No. 1 choice for seeing animals in their natural habitat.