In a first-of-its-kind virtual tryout process that spanned Friday through Sunday, The Ohio State University Marching Band selected its drum majors for the 2020 season.

Brayden Deemer, an air transportation major from Howland, will be the 63rd drum major of the band. Kyle Hustek, a computer science and engineering student from Plain City, has been selected as the assistant drum major for 2020.

“When I heard my name, the first thing I felt was relief because I don’t have to stress out anymore,” Deemer said. “This means a lot, to follow in the footsteps of our alumni drum majors. Now I can really put my time and effort into paying it forward to others and be able to teach them.”

“I was so excited,” Hustek said. “There’s the split second before the names are announced that feels like 10 minutes, where you’re panicking a little bit but also confident in the work you’ve done. But hearing my name, I was ecstatic.”

Instead of the traditional drum major tryouts that feature a live pep band and all candidates competing on the same field, this year’s tryouts were conducted digitally.

On Friday, the six candidates completed their interview portion with the band’s directing staff via Zoom. Then, on Saturday at noon, the candidates were given an hour to film their twirling and marching routines. Each candidate was responsible for finding a location to record their performance, which consisted of a ramp entrance, a twirling routine set to the marching band’s performance of “Trees” by Twenty One Pilots, and a series of high tosses.

Performance videos were then submitted to this year’s judges, made up of the directing staff and a select group of drum major alumni. 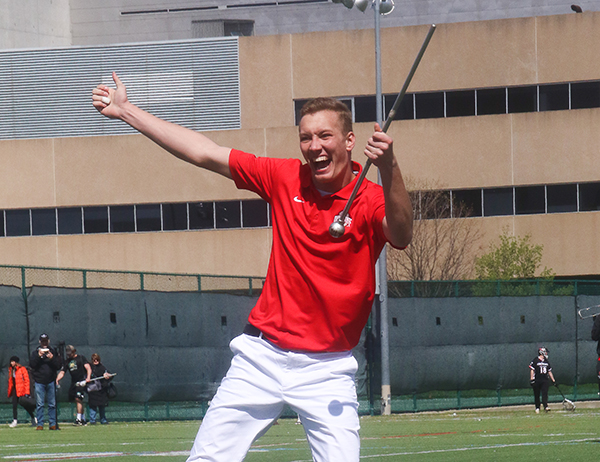 Brayden Deemer performs a routine during the 2019 drum major tryouts.

Christopher Hoch, director of Marching and Athletic Bands and assistant professor in the School of Music, was happy with how this year’s auditions went despite the challenges presented by not conducting them in-person.

“I thought the process went really well,” Hoch said. “It’s not as great as doing the auditions live, but the videos turned out great, the performances were easy to see and evaluate. I thought it worked out great.

“I’m thrilled for the guys. All six candidates really did a remarkable job adjusting to this situation, and I think we’re in really great hands with our two new drum majors.”

Deemer will be entering his third year at Ohio State in the fall. He began twirling before his freshman year of high school, having never picked up a baton before that. After watching and then spontaneously participating in a twirling clinic following a summer band camp, he asked for a baton for his 15th birthday present.

“After that, I never put the baton down except for when I had to eat or sleep,” Deemer said.

Deemer enjoyed twirling and was inspired on his journey by John Lavange, a fellow alum of Howland High School who was Ohio State’s drum major in 2016 and 2017.

“Just being in the band is an awesome experience, and now that I’m going to be the drum major means so much,” Deemer said. “The band has given me a lot, and now I can give back.”

Hustek, a fourth-year student at Ohio State, did not begin twirling until the summer before his senior year of high school. Learning some twirling routines from his majorette classmates, Hustek quickly excelled upon picking up a baton and was selected as the drum major of Jonathan Alder High School that year.

When scheduling conflicts prevented him from joining the Ohio State Marching Band as a freshman, he started on D Row as a sophomore. He refined his twirling under drum major Konner Barr and Assistant Drum Major Morgan Davis over the last two years and soaked in the drum major culture from alumni around the program.

“Getting to be a part of this band family is an absolute honor,” Hustek said. “I’ve come to love all my peers in the band, and it’s the opportunity of a lifetime to get to go out on the field with them and support my college in this way.”

Deemer and Hustek are the first two students to have secured their spots for the 2020 Marching Band. The remaining spots will be filled during the band’s tryout process, which is still scheduled for mid-August. 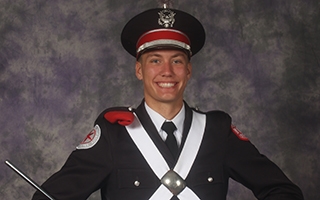