A group of astronomy and physics students recently got a firsthand look at the Green Bank Telescope, the world’s largest steerable radio telescope in Green Bank, West Virginia.

Located away from civilization within the National Radio Quiet Zone, the gigantic, 485-foot-tall telescope is used to measure a vast array of objects and phenomena in outer space, from supermassive black holes to signs of extraterrestrial intelligence. It does this by observing radio frequencies from space, which are emitted by various things like galaxies, neutron stars and star-forming gases.

Because these signals can be extremely weak, radio telescopes require large, sensitive equipment. The Green Bank Telescope (GBT)’s dish alone spans 2.3 acres, which is larger than a football field. 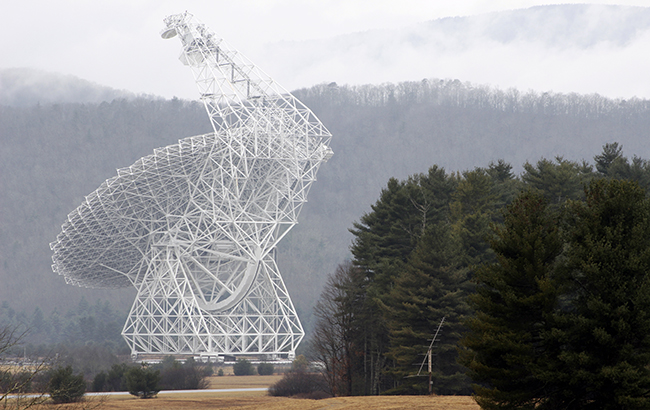 “When most people think of telescopes, they think of optical light,” said Molly Gallagher, a graduate research associate in the Department of Astronomy who accompanied students on the trip along with Wayne Schlingman, assistant professor of astronomy and director of Ohio State’s planetarium.

To operate efficiently, the GBT must be shielded from human-produced radio transmissions, which are heavily restricted in the area. Within close confines of the telescope, cell phones must be turned off and non-diesel vehicles are prohibited, said Jack Warfield, a third-year astronomy and physics student who went on the trip.

The roughly 35 students on the trip saw the control room of the GBT and heard from the telescope operator, as well as toured the rest of the Green Bank Observatory, which has several other telescopes on its campus. Students used one of these — a manually operated 40-foot diameter telescope — to detect interstellar hydrogen in the Milky Way, which gave them a picture of where the galaxy’s spiral arms are.

“It was invaluable just being able to experience hands-on the technology that we learned about that’s not like anything locally available,” Warfield said. “I really saw how much of an engineering operation it is.” 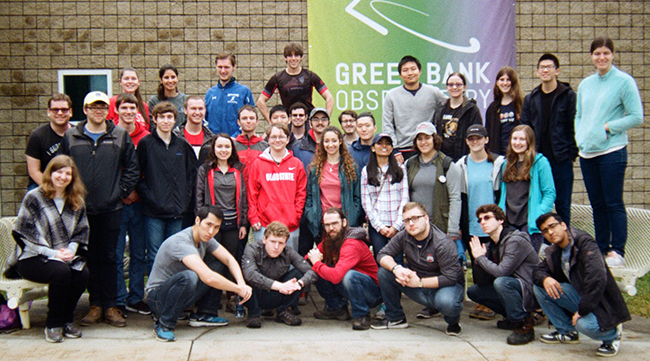 Astronomy and physics students at the Green Bank Observatory in West Virginia.

Students also learned about the storied history of radio astronomy and the search for extraterrestrial intelligence, which continues at the GBT today through Breakthrough Listen, part of the Breakthrough Initiatives founded by Yuri Milner, Mark Zuckerberg and the late Stephen Hawking, and the most comprehensive Search for Extraterrestrial Intelligence (SETI) investigation to date.

With $100 million in private funding, Breakthrough Listen is studying radio waves from our galaxy; one million of the nearest stars; and 100 of the closest galaxies for signs of alien life. The program began in 2016 and is set to run through 2026.

“They haven’t really caught anything major, but the hope is that they’ll eventually find something that they’ll want to investigate further,” Warfield said.

Though many SETI-related studies have used the GBT, it will be hard to measure up to the precedent set by Ohio State, which holds the record for the longest-running SETI project in history.

Between 1973-95, Ohio State’s Radio Observatory, known as the “Big Ear” telescope, surveyed the sky for extraterrestrial radio signals, and in 1977 the telescope picked up the Wow! Signal — the strongest candidate for an alien radio transmission ever detected.

Researchers have long hypothesized that aliens would choose to communicate with humans at a frequency near that emitted by hydrogen, since hydrogen is the most common element in the universe, Gallagher said. The Wow! Signal occurred at almost exactly this expected frequency and was about 30 times more intense than the surrounding noise level. 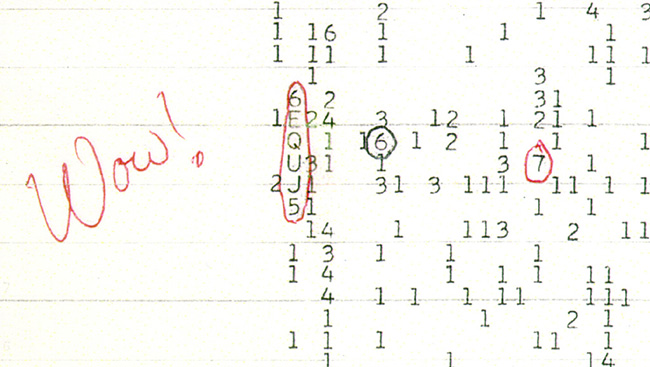 In 1977, a curiously unusual signal was detected at the Ohio State Radio Observatory. Astronomer Jerry Ehman wrote “Wow!” next to the finding, coining the signal’s name.

“No one knows what it is, and there have been various theories, but nothing so far has been completely satisfactory,” said Gallagher, who has worked on the GBT and similar telescopes for her research. “It exists as the lure of what might be aliens.”

The GBT has additional applications in chemistry, physics, planetary science and cosmology and is slowly helping scientists piece together the past, present and future of our universe.

"There are a lot of interesting things out in space that we wouldn’t be able to detect another way,” Warfield said.

.@OSUPhysics & @OSUAstro students got an inside look at the Green Bank Telescope, which is being used in the search for extraterrestrial intelligence. #ASCDaily 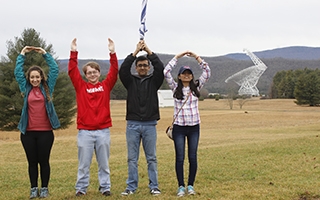