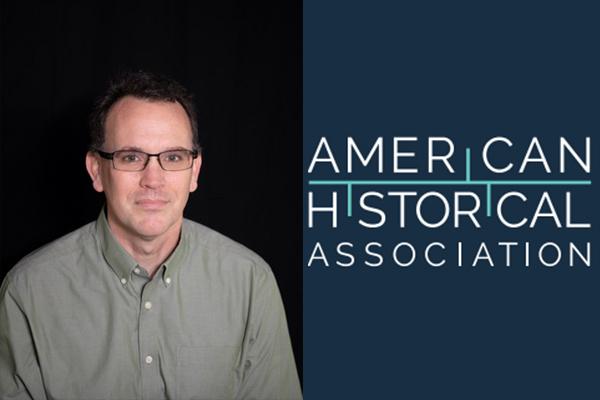 Associate Professor Nicholas Breyfogle from the Department of History has been awarded The Herbert Feis Award for distinguished contributions to public history by the American Historical Association (AHA), the group announced last month.

Breyfogle will be given the prize at AHA’s annual meeting in Philadelphia in early January.

“It is a tremendous honor to be recognized by the AHA," Breyfogle said. "For more than 15 years, we have produced historically based analysis of today’s most pressing events and made this knowledge freely available to a diverse public. In connecting the present and the past, we aim to foster a better informed, more thoughtful citizenry.

"I say ‘we’ because these projects have from day one been the fruit of the collective efforts of a remarkable and tireless team of faculty, graduate students, and authors. Special thanks to Steven Conn at Miami University, David Steigerwald, Laura Seeger, Getty Images, the Stanton Foundation, and the Department of History.”

In existence since 1984, the Herbert Feis Award is offered annually to recognize distinguished contributions to public history, broadly defined. The prize is named in memory of Herbert Feis, a public servant and historian of recent American foreign policy, with an initial endowment from the Rockefeller Foundation.

Breyfogle, who also serves as the director of the Harvey Goldberg Center for Excellence in Teaching, is a specialist in the history of Russia/the Soviet Union as well as in global environmental and water history. He has worked extensively in the field of public history and has been the co-editor of the online magazine/podcast/video channel Origins: Current Events in Historical Perspective since 2007 as well as the recent project Picturing Black History, an Origins collaboration with Getty Images. He has also worked in film, including the documentary … And Water for All. He joined Ohio State in 1998.

The AHA offers annual prizes honoring exceptional books, distinguished teaching and mentoring in the classroom, public history and other historical projects. Since 1896, the Association has conferred over 1,000 awards. This year’s finalists were selected from a field of over 1,300 entries by nearly 150 dedicated prize committee members. The names, publications and projects of those who received these awards are a catalog of the best work produced in the historical discipline.