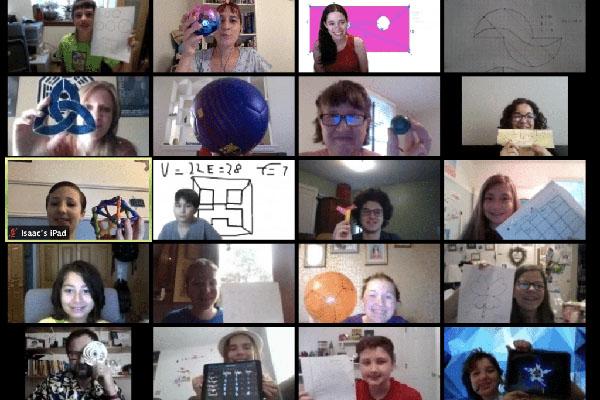 Faculty members in the Department of Mathematics have always been passionate about helping students of all ages develop an interest in math, but there wasn’t an official math outreach program in the department before Buckeye Aha! Math Moments (BAMM).

When BAMM started in 2018, it provided a better way to group individual outreach efforts as part of a larger initiative within the department. BAMM incorporated previous activities, including school workshops and festival appearances, with others initiatives like a math summer camp for high school girls.

But the COVID-19 pandemic paused all in-person events just as BAMM was gaining some name recognition. Monica Delgado Carillo, associate director of outreach in the Department of Mathematics, remained optimistic about giving students opportunities to learn math from home.

In 2020, the math outreach summer camp went virtual and expanded its eligibility criteria, a decision that led to significantly more applications than expected. With the help of Ohio State student volunteers, the online lessons brought together 150 participants — middle and high school students of all genders in addition to community members — to learn about polyforms and polygons in art and nature.

“When I’m working with people who are younger than me, I like to see them get excited about math because it reminds me of when I was younger.” said Hannah Johnson, a junior honors math major and BAMM volunteer. “They’re not stressed about grades or getting a degree, solving hard problems. They just see the cool aspects of math.”

From music to puzzles to magic, the summer camp demonstrates math’s potential by showing students how it’s already incorporated in interesting topics.

A student at the virtual summer camp explains more about trefoil knots.

During the second year of the camp’s virtual format, students discovered the math behind magic tricks and heard from mathematicians who have taught or performed math magic. Listen to what students had to say in the summer camp survey:

"It changed my view and made me see math as an opportunity in a plethora of career options and fun things to do with my family."

"We learned many cool tricks with rope, dice, cards, and just plain numbers! At the end of the day, we all came together and talked about what we learnt, and this really helped me understand different tricks. ... I learned that math is not just equations, numbers, variables, etc. It is everywhere, and is incorporated into many things that make up our modern world. I really enjoyed this camp, and I'm definitely coming back next year!"

"It made math more fun, interesting, and engaging for me."

BAMM helps students overcome math anxiety by infusing the subject with fun and going beyond school curriculum. If more students feel intrinsically motivated to learn math and understand how their skills are useful, they may continue to seek learning opportunities and potentially pursue a career in math.

Even so, people can run into barriers upon entering the mathematics community regardless of talent or dedication. This leads to a continuous circle of students who aren’t inspired to follow a math career, so there are fewer professionals outside of the white, male mathematician archetype to inspire or mentor younger students in the first place.

Johnson knew she enjoyed math after taking a geometry class and went on to organize events for the math club and participate in math competitions in high school. Bursting with excitement, she came to Ohio State only to discover that some math peers were more competitive than welcoming. Johnson forged her own path by volunteering with BAMM. Not only did she find friends, but helping with outreach events increased her passion for math and gave her more confidence.

“It affirms me feeling like I’m a part of the math community,” she said.

Going into 2021, Delgado Carillo knew she wanted to plan more virtual outreach events and had heard about departments having success with educational film series. She organized the Diversity in Math Movie Series to highlight real mathematicians who come from groups historically underrepresented in math. Participants had access to watch each film in the days leading up to the panel discussions.

The series kicked off with “Hidden Figures,” the true story of three Black NASA employees who helped launch John Glenn into orbit. Based on a New York Times bestseller and starring Octavia Spencer and Janelle Monáe, the film is also known in the department from the popular GE course “Intersections of Mathematics and Society: Hidden Figures.”

Since people enjoyed the first film, Delgado Carillo spent more time researching and asking for recommendations to find enough movies to finish the series. A Facebook friend suggested “Girls Who Fell in Love with Math,” a documentary about two friends who grew up together in 1960s Taiwan and became famous mathematicians in the U.S. A mathematician from the movie joined the panel to reflect on the film and share personal experiences.

As the world continues to navigate safety restrictions during the pandemic, BAMM is working on some unique programming to expand its influence past central Ohio.

Non-majors, math majors and graduate students at Ohio State can enroll in a mathematics and community outreach course that will pilot in spring 2022. Students will design new math activities for younger kids that are related to recreational activities such as art, games, culture and music as well as demonstrate the lessons during classroom visits.

“We want to help these students realize the importance of doing outreach, paying forward to their community, and that you can actually talk about mathematics to non-mathematical people through recreational mathematics topics,” Delgado Carillo said.

Bart Snapp, an assistant professor and program specialist in the Department of Mathematics, is collaborating with Delgado Carillo to locate spots with mathematical properties around Ohio State’s campus for the Virtual Math Trail. The Mathematics Tower could be featured because of the difference in floor tiling on each level and some unique engravings around the building. Snapp hopes the project opens more eyes to the beauty and intrigue of math that can be seen in everyday life.

Starting late 2021 or early 2022, Delgado Carillo will begin releasing interviews with faculty in the Department of Mathematics to publicize their research and attract more interest from the general public. She wants to start the series off with more abstract math topics and dive into interdisciplinary collaborations in later episodes.

Although the first few years since BAMM’s formation has been a challenge, it has a bright future and will always encourage students to keep learning about math.