So why do people still do it? That’s up to Brittany Shoots-Reinhard, a research associate in the Cognition and Affect in Decision Making (CAIDe) Lab housed in the Department of Psychology, to figure out.

Shoots-Reinhard recently joined the Distracted Driving Task Force, a collaborative initiative spearheaded by the Ohio Department of Transportation and the Ohio Department of Public Safety. The task force leans on expertise from a variety of resources, including law enforcement, insurance companies and educators, and its purpose is to give recommendations on how to curb distracted driving to Ohio’s upcoming gubernatorial administration.

Shoots-Reinhard has a PhD in social psychology from Ohio State, and her research revolves around risk communication, decision making, motivation and persuasion. Her research, she says, allows her to apply basic science methodologies to real issues, and the populace’s motivations and perceptions regarding distracted driving falls right in line with her academic inquiries.

“Rather than just studying how people make decisions in hypothetical scenarios, we might give graphic warning labels to smokers to see how they react or study why people drive distracted despite knowing the risks,” Shoots-Reinhard said. “So that’s the approach the lab takes — basic science plus applied to make sure what we’re doing actually matters for the real world.”

Shoots-Reinhard, along with Arts and Sciences Distinguished Professor and CAIDe Lab Director Ellen Peters, conducted a study that broke down distracted driving behavior and statistics. In a pair of surveys that sampled over 1,000 drivers, 66.5 percent indicated they used their phones while their car was in motion at least some of the time. When asked about the specific kind of phone usage participants engaged in while driving, they indicated they adjusted music on 47 percent of trips; adjusted GPS, 25 percent; talked on their phone, 13 percent; read texts, 12 percent; sent texts, 8 percent; and watched movies, 3 percent. 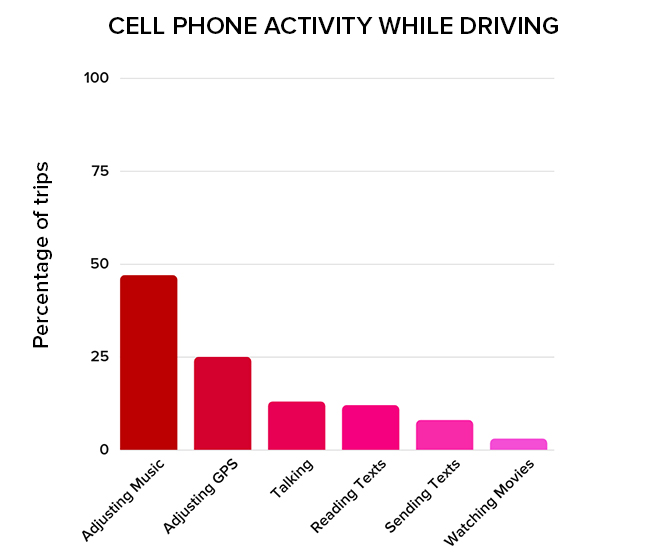 Though audio in the form of music and podcasts is the most prevalent form of distracted driving, it is not necessarily the most dangerous. The worst instance of distraction, Shoots-Reinhard says, is when drivers’ hands, eyes and minds are disengaged from driving.

“So, texting is particularly bad because it takes your eyes, your hands and your mind off driving,” she said. “Eating is another example.”

But a key discovery the study made was that people who drive distracted are less likely to be receptive toward messaging that attempts to curb distracted driving.

“We found that predicted how much support people felt about different types of mitigation strategies,” Shoots-Reinhard said. “There’s differences in what people find more or less acceptable, but the people that drive distracted are more likely to have less-positive attitudes toward these things across the board.

People like to be in control,” she continued. “People think things they’re in control of or are familiar with are less scary. A phone is not that scary, and we’re so used to driving. We’re all a little bit overconfident about driving and maybe too familiar with it. So, we drive the same paths every day, and it just doesn’t seem like a very risky thing.”

“We know from public health and persuasion literatures that these things can backfire,” Shoots-Reinhard said, pointing to an example of messaging in which a government agency posted signs informing tourists about petrified wood being taken from a national park. “But what they’d actually done is they communicated a norm to people that, ‘Hey, everybody else is stealing petrified wood.’” … It’s important to really be careful and use all of the literature that’s been done, all of the past research across a variety of areas to figure out what kinds of messages will have the best impacts.” 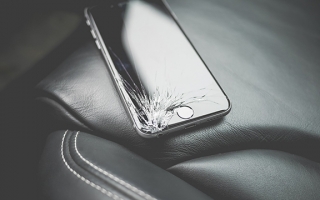