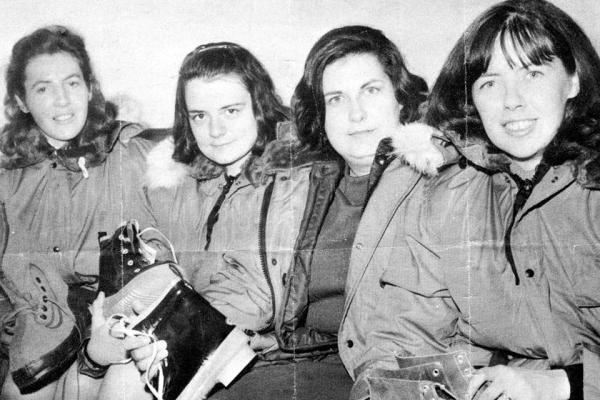 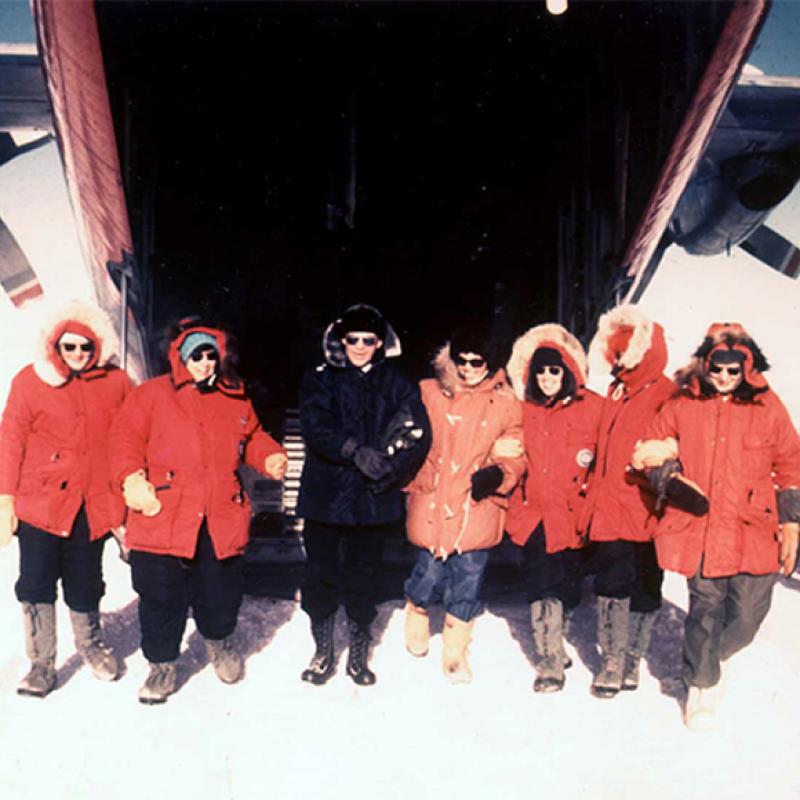 In the 1960s, the National Science Foundation found itself in disagreement with the U.S. Navy. The NSF was trying to pioneer a new field of Antarctic science, and it needed all the talent it could get — including women. But the Navy organized all travel to Antarctica and would only allow men on their ships and stations.

That decade, however, was a time of social upheaval. Along with civil rights, Vietnam War protests and the environmental movement, 1968 also brought turnover in naval leadership, something polar historian Morgan Seag said was coincidental but convenient for the NSF.

“A number of factors coalesced that meant that the Navy seemed like it might finally be open to change,” Seag said.

Enter Lois Jones, a geochemist working on her PhD at Ohio State’s Byrd Polar and Climate Research Center, then called the Institute for Polar Studies. Jones had received her undergraduate and masterss degrees in chemistry at Ohio State before persuing her doctorate, and her reputation for excellent research, along with good timing, opened the door for her to lead the first all-female research group to Antarctica in 1969 and become one of the first women to reach the South Pole. 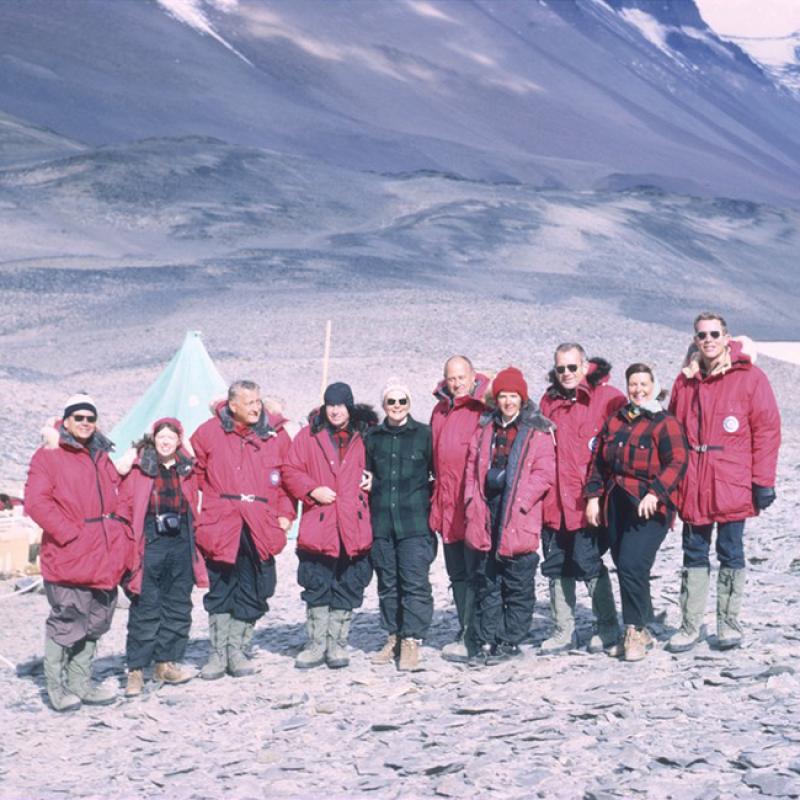 As a celebration of 50 years since Jones’ and her team’s expedition, the Byrd Polar and Climate Research Center hosted a Women in Antarctica Symposium on Oct. 17 and 18. The symposium reflected on how her trip laid the foundation for future women scientists and spurred new inquiries into the geology of Antarctica.

“The women understood when they were on the ice that if they didn't do an exceptional job, they were going to close the door behind themselves,” said Seag, who is writing a book on Jones and presented at the symposium. “The following year, another female Antarctic scientist was told, ‘If you don't do a good enough job, there won't be any more women for a generation in the Antarctic.'"

Before Jones, the Navy claimed it didn’t have the budget for facilities for women on the ice. According to Seag, they were concerned the presence of women would create competition and morale problems among men working there. She said there was also a concern that women on the ice would be emasculating; Antarctica was believed to be a mythological, extremely challenging place that only true men could handle.

“For centuries there had been this narrative that men would prove their masculinity by battling such a harsh environment when, in fact, life on these stations was often safe and relatively tedious,” Seag said. “In the late 1950s, one Navy officer said that having women on station would 'wreck the illusion of being frontiersmen going into a new land and to the illusion of being a hero.'" 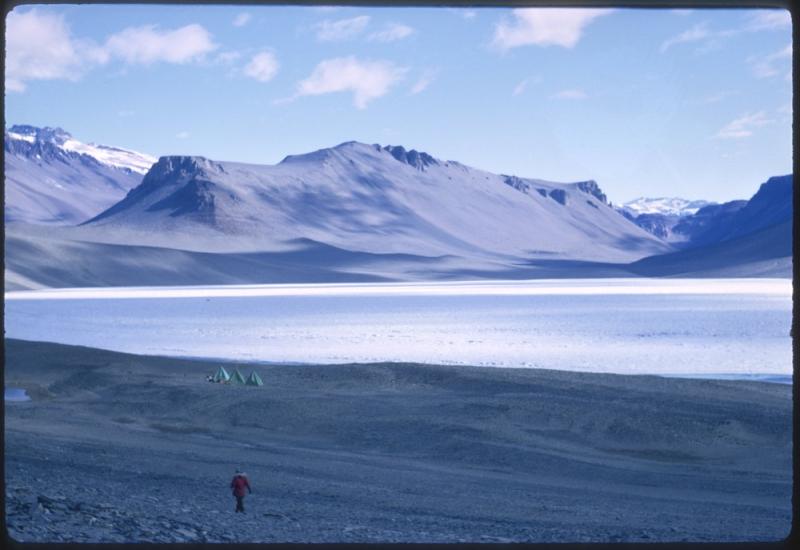 In the distance, the women's tents, which served as their living quarters, sit along one of Dry Valleys lakes the women were researching.

But times were changing, and Jones got the approvals she needed after she agreed to put together an all-female team, all from Ohio State: geology graduate student Eileen McSaveney, entomologist Kay Lindsay and chemistry undergraduate student Terry Lee Tickhill. They, along with New Zealand biologist Pamela Young and Detroit Free Press reporter Jean Pearson, trekked down south.

“She basically put in the work of creating a profile for her team and a proposal for their research that was exceptional enough that it would have been very hard to turn down,” Seag said.

The team was studying chemical weathering in the McMurdo Dry Valleys, a polar desert that is part of the 2% of snow-free Antarctica and “the closest of any terrestrial environment to Mars,” according to NASA. However, the valleys also have a collection of ice-covered, closed-basin lakes fed by water from melting glaciers. Kathleen Welch, professional research assistant at the University of Colorado working on the McMurdo Dry Valleys Long Term Ecological Research Project, says Jones wanted to know how these freshwater lakes became saline and acquired a wide variety of geochemical characteristics.

The women understood when they were on the ice that if they didn't do an exceptional job, they were going to close the door behind themselves."

In the ’60s, the scientific establishment believed the Valleys were too dry and too cold for small amounts of the surrounding rocks to dissolve into the water. Jones questioned that assumption, and through her research in 1969, discovered that such weathering was actually responsible for the mineral differentiations in the lakes.

Welch says Jones’ use of strontium isotopes present in the water, which could be traced to potential nearby sources like volcanoes and ocean water, was a clever way to understand the history of those lakes given the tools available.

“One of the things she was really thinking about was the landscape and all the processes that happen on the landscape and the Dry Valleys, and we've continued to collect more samples and think about this in more depth,” Welch said, who also attended the symposium. 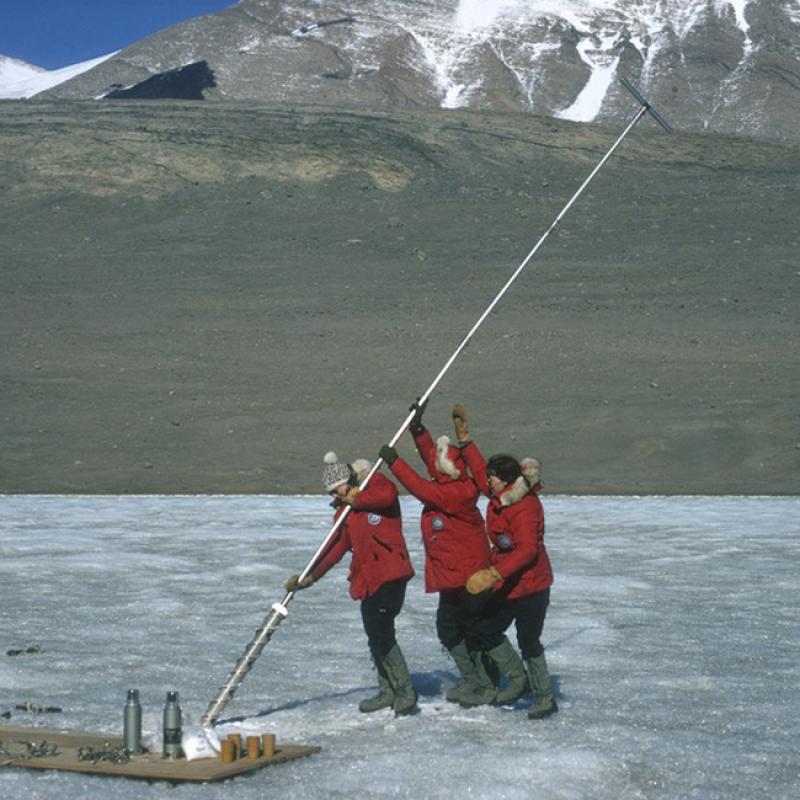 Still, Jones’ historic expedition did not eliminate the challenges women faced in science, even for herself. After her 1969 research, she was never able to go back to Antarctica, and Seag says she faced gender-based discrimination early in her career after leaving Ohio State.

“There's lots to celebrate in her life,” Seag said. “We should also acknowledge the remarkable barriers that she overcame, some which were insurmountable in terms of her efforts to get back to the Antarctic as a scientist, though she still managed to forge a remarkable career as a geochemist."

Jones went on to become an assistant professor at the University of Georgia, followed by 16 years as a researcher at the oil and natural gas company, Conoco. Her last academic appointment was with Kansas State University, and after her retirement, she moved back to Columbus. Before she died in 2000, Jones endowed two fellowships at Ohio State: the Lois M. Jones Fellowship Fund in Geological Sciences and the Lois M. Jones Endowment for Cancer Research Fellowships. She also volunteered with an English as a Second Language program.