Chemistry professor starts foundation to give back to children in Ghana

Chemistry professor starts foundation to give back to children in Ghana 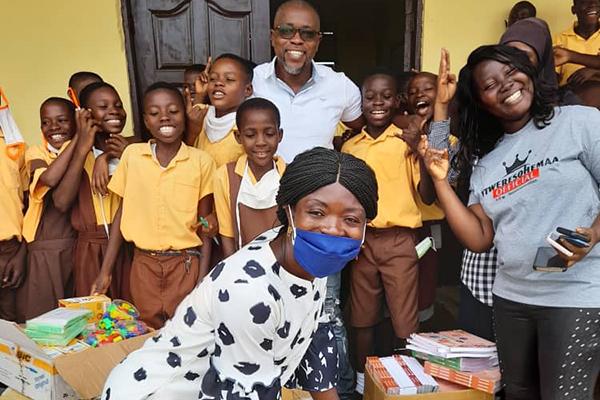 After a childhood spent adapting to new opportunities, geography and resources, Abraham Badu-Tawiah is making a point to give back to those growing up in similar circumstances.

Where he was raised, a small village in Ghana, a formal education was not the priority. Farming was important to Badu-Tawiah’s family and his community. Little about his upbringing would suggest he would eventually attain his current position as a professor in Ohio State’s Department of Chemistry and Biochemistry.

But an errand born out of kindness changed the direction of his life. One day, when Badu-Tawiah was in second grade and attending school only sparsely, a teacher who was living with Badu-Tawiah “tricked” him into carrying the teacher’s book to school. From that point on, school attendance became more regular. He stuck with his education while continuing to help his family with farming, and he became one of three students in his 500-person high school class to pass a college entrance exam.

At Kwame Nkrumah University of Science and Technology, he was assigned chemistry as a major. He turned that into a master’s degree from a university in Pennsylvania, then a doctorate from Purdue University, then a postdoctoral fellowship at Harvard and eventually his professorship at Ohio State. As part of his current research, he is working on an inexpensive way to detect malaria in rural communities so people don’t have to travel to hospitals.

He’s also hoping to make a direct impact by starting a program in Ghana to inspire more children like him to stick with their education and expand their opportunities.

“I want to go to the little ones and put in their head that if you make up your mind, you can do this,” Badu-Tawiah said. “It doesn’t matter what your situation is. You can actually do this.”

Badu-Tawiah understands that there are negative connotations around the concept of “brain drain,” which is when highly skilled or talented people — like himself — leave one country to move to another, thereby depriving the home country of their talents. There are pros and cons to brain drain, but Badu-Tawiah is trying to reverse that process with his own method of “brain gain.”

He has seen research from the American Immigration Council showing that about 50% of Africans who emigrate to another country become naturalized to that new country and never return home. Of that 50%, almost 25% have a college degree. So, his hope is to tap into that population of African immigrants to the United States who have had successful careers and have them help fund “brain gain” back home.

His charity, which he will be calling “X-Ed Foundation,” short for “Excelling Education,” is in its early stages but is already finding success. So far, 15 people took part in their initial fundraising effort at Bentum D/A Basic School in Ghana’s Central Region, raising $1,400 for notebooks, math textbooks and other school supplies. A second project with 28 contributors in 2022 raised nearly $3,000 to purchase 40 desks each for two schools in the towns of Nkowi and Pipie. 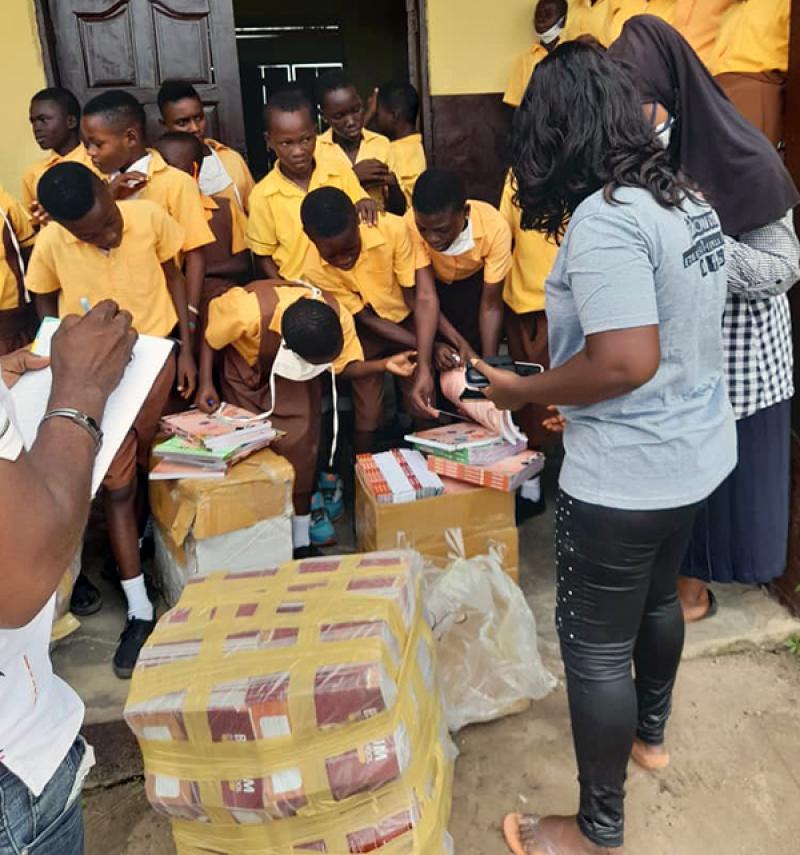 Students at the Bentum D/A Basic School in Bentum, Ghana, received 150 textbooks and other school supplies thanks to Badu-Tawiah's early efforts in 2021.

Badu-Tawiah has recruited academics and other professionals from around the country to get started raising funds for children in Ghana.

Daniel Adjekum, an assistant professor of aviation at the University of North Dakota, has already taken part in X-Ed’s mission. Something as simple as getting textbooks and desks for children in villages not aligned with formal education speaks to his own humble roots as one of those kids. After starting in a farming village, he enlisted as a member of the Ghanaian Air Force where he piloted Ghana’s president as his final post before moving to the United States with his wife.

“Instead of sitting on the floor, they have desks to sit at and be comfortable,” Adjekum said. “As educators ourselves, we know in terms of pedagogy, teaching kids, it’s not just about what we present to them. Their environment also matters. Once the environment is conducive and comfortable for the kids to learn, we get the best out them.”

It’s not just people who grew up like Badu-Tawiah and Adjekum who are helping children back home. Some early contributors to X-Ed have roots in formal education and big-city life.

Emelia Ansu-Gyeabourh, who grew up having support from her family to get an education and earned an advanced degree from the University of Liverpool in England, now works at Boston-based Sana Biotechnology as an analytical development scientist. But despite her privileges in life, she wants to help those less fortunate in Ghana.

“I would be proud to see every single person living life happy and making it to the top,” Ansu-Gyeabourh said. “I want to help less privileged people in my country to make sure everyone gets the education I got. Seeing kids in the classroom not having desks, not having materials to learn really breaks my heart.”

Herman Sintim, a professor of chemistry at Purdue University, had a similar childhood experience to Ansu-Gyeabourh. But his parents grew up in similar conditions to Badu-Tawiah and were able forge a pathway for their children. He knows that everywhere you look, there are talented children who aren’t getting the resources they need.

“I truly believe that talent is uniformly distributed across the world, but opportunities to develop that talent are missing,” Sintim said. “How do we mobilize that? Even if 5% end up higher than they would have been, the economic benefit is going to be huge.”

So what steps is Badu-Tawiah taking to make these dreams a reality? The early part of the mission is identifying key schools, making connections with locals to ensure funds are being used properly and earning trust from Africans in the United States who might doubt that their donations will get to the children in the end.

Using his connections to Ghana, Badu-Tawiah found three different schools in the remotest parts of Ghana that would greatly benefit from X-Ed’s contributions. Badu-Tawiah has spoken to the teachers and students, explaining that he was in a similar position to them years ago.

He hopes the resources from X-Ed combined with seeing someone who achieved great things from the same position will negate any apprehension they might have about attending school.

“I think they believe it’s hopeless, nothing is going to come out of this,” Badu-Tawiah said.

“[As a child] I never saw anybody who made it before. If you show yourself and say you were in their shoes, that role model can encourage students to work harder.”

Earning trust from others has proven tricky. Part of the reason many Ghanaians leave is corruption, Badu-Tawiah said. They fear money they donate to an unknown person with a recently established foundation won’t wind up in the hands of children and teachers in Ghana. He tries to build trust by showing that he is a visible figure at a major university, promising that he wouldn’t give up decades of an academic career to defraud people. He also provides regular updates to donors in the form of email newsletters.

The next step is to register the foundation as an official charity that can provide contributors with receipts and tax returns.

“I want to be the one person you can trust,” Badu-Tawiah said. “That one person that will do what we have promised.”

X-Ed is still in its early stages, but Badu-Tawiah is encouraged that he can make a difference. His success in the United States owes largely to his own talents, but he also has some amount of luck to thank. How many children in Ghana are just as talented, just as smart, but don’t get the luck and opportunities he did?

“It seems impossible, hopelessly impossible,” Badu-Tawiah said. “But maybe there’s light at the end of the tunnel.”