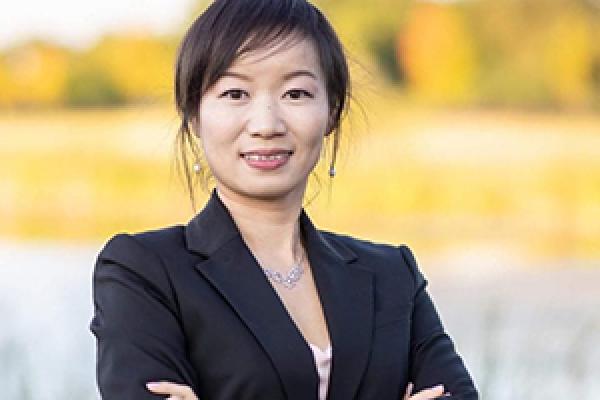 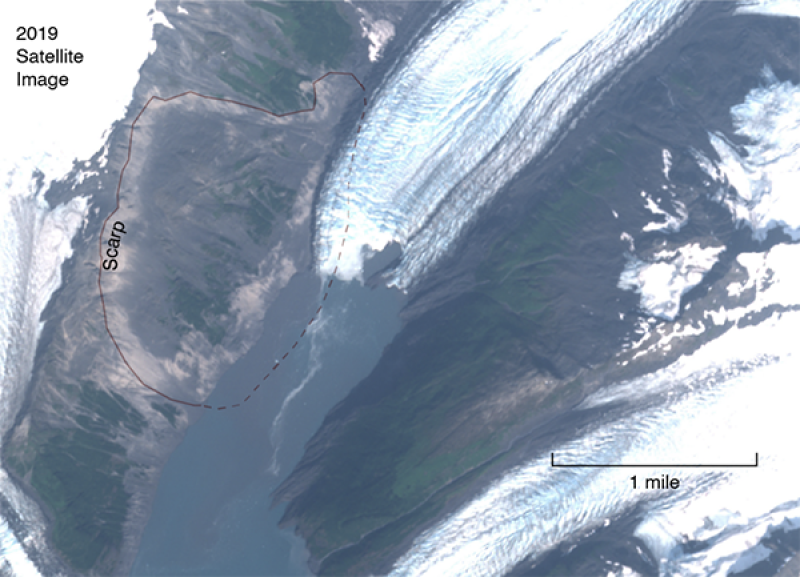 The site marked with dotted lines could be the site of a future landslide in Alaska, as research by a group of scientists including Ohio State's Chunli Dai shows.

Chunli Dai, a senior research associate at the Byrd Polar and Climate Research Center, was using satellite data to map Alaskan landslides caused by the climate-change-induced shrinking of glaciers. Going by elevation data at one particular mountain slope near Barry Arm, about 60 miles east of Anchorage, it was clear there had been no landslide.

But when Dai tried looking at horizontal, side-to-side motion — instead of vertical elevation changes — of the slope over time, her data combined with other scientists’ research showed the potential for a massive landslide in the future.

“The first meeting when I presented my research,” Dai said, “my colleagues were like, ‘No, that can’t be true. The size is too big.’”

Dai pressed on, using data from other satellites to confirm her initial findings. The mountain’s horizontal motion she discovered resembled a 2015 Alaskan landslide as well as one from 2017 in Greenland that killed four people.

“We know it’s an unstable slope that can cause a big landslide,” Dai said. “The biggest threat is the tsunami that it causes. If you’re near the landslide, that’s a real danger.”

Dai’s findings are part of a larger study funded by NASA that involves more than a dozen local, national and international scientists. They were so alarmed by their collective findings regarding the Barry Arm site that they released a document to the public in mid-May detailing their conclusions and warning the community.

The potential Barry Arm landslide could occur within the next year, and they warned it was likely to happen in the next two decades. The group also modeled the landslide and ensuing tsunami, showing waves taller than 250 feet hitting the closest areas.

This video shows the wave height of a potential Barry Arm tsunami for a three-hour time period after the landslide that caused it.

As part of her research, Dai established a firm link between the retreat of the Barry Arm Glacier and the horizontal motion of land.

The Byrd Polar and Climate Research Center is no stranger to glacier research, with Dai being one of many Byrd Polar scientists studying glaciers around the world under the leadership of Byrd Polar Director Ian Howat.

Dai, who has a master’s degree and a PhD from Ohio State in geodetic science, hopes this research will lead to more real-time data collection from the Barry Arm site. With more instruments in place — including live cameras and GPS devices — as well as more frequent monitoring from satellites overhead, scientists could get an early warning out when a landslide and tsunami are clearly imminent.

“This is very unique because a lot of landslides happen and we don’t know ahead of time,” Dai said. “And this one if we can monitor it and give a warning, it’s a big deal.”