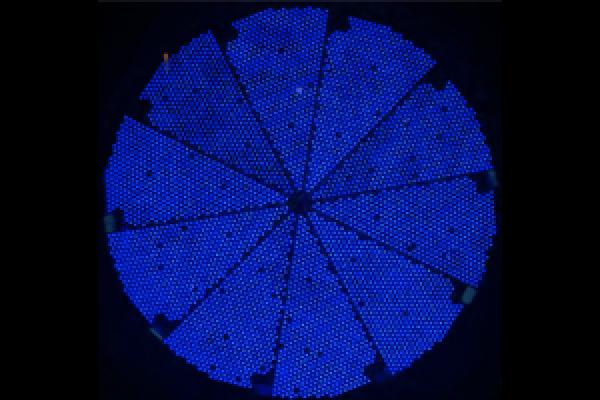 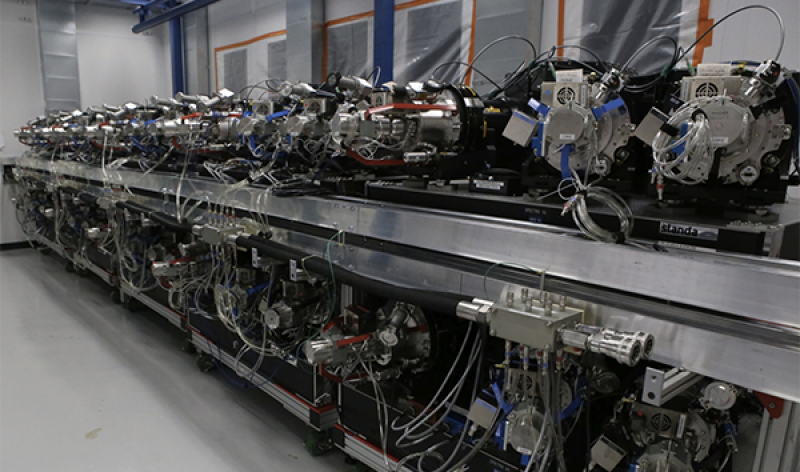 Ten spectrographs of the Dark Energy Spectroscopic Instrument are housed in a climate-controlled room that was designed by Ohio State.

With large contributions from Ohio State faculty and researchers, a five-year quest to map the universe and unravel the mysteries of “dark energy” officially began Monday at Kitt Peak National Observatory near Tucson, Arizona, when the Dark Energy Spectroscopic Instrument (DESI) started capturing and studying light from tens of millions of galaxies and other distant objects in the universe.

DESI is an international science collaboration managed by the Department of Energy’s Lawrence Berkeley National Laboratory (Berkeley Lab) with primary funding from DOE’s Office of Science.

Faculty members and researchers from Ohio State’s Center for Cosmology and AstroParticle Physics (CCAPP) have been a part of the project since the beginning. Physics professor Klaus Honscheid and astronomy professor Paul Martini were instrumental in designing and constructing the new instrument, which at its core includes 5,000 minuscule “fiber positioner robots” that aim DESI’s sensors at precise locations in the night sky.

“It has been a long journey from the first ideas almost 10 years ago,” Honscheid said. “After years of design, construction, commissioning and endless project reviews, we completed arguably one of the most complex astronomical instruments ever built with more than 500,000 parts in the focal plane alone.” Honscheid said. “Operating the DESI instrument is like conducting a large orchestra, and you have to make sure that everybody does the right thing at the right time, or it doesn’t work. It’s not just the instrument hardware that got us to this point, it’s also the instrument software, DESI’s central nervous system.”

Honscheid also directed the design of the DESI instrument control and monitoring systems. He credits scores of people in his group and around the world who have built and tested thousands of DESI’s component parts, most of which are unique to the instrument.

Also involved in the project were faculty members from the Department of Astronomy. Martini was part of a team that built the 10 spectrographs that allow DESI to measure the light taken in by the 5,000 fiber optic sensors. Martini also took on a role as an instrument scientist, ensuring the parts all integrated properly when they shipped to Arizona from all over the world.

“The DESI spectrographs record 5,000 spectra with every exposure, and during our last few months of tests we’ve already measured spectra for over a million unique objects,” Martini said. “This means we already exceed almost every previous survey, and we’re just getting started. I’m very excited for all the new discoveries we will make.”

Distinguished University Professor David Weinberg has helped design DESI's “bright galaxy survey,” which will be conducted when the moonlit sky is too bright to observe DESI's fainter targets.

“A lot of my research has been based on a million-galaxy map created over a decade of observations by the Sloan Digital Sky Survey,” Weinberg said. “DESI is so powerful that it can use the ‘worst’ few nights of each month to make a map that will itself be 10 times bigger than the Sloan survey's, tracing the formation of galaxy clusters and superclusters over the last 4 billion years of cosmic history.”

“This is a much larger job than can be done by any one person — and indeed requires collective understanding of what everyone involved in data collection has done — but it is my job to make sure all of the people and their tools are in place to make sure this is done quickly, efficiently and accurately,” Ross said.

What sets DESI apart from previous sky surveys is the fact that it will measure 10 times more galaxy spectra than ever obtained, resulting in a 3D map of the universe.

Instead of two-dimensional images of galaxies, quasars, and other distant objects, the instrument collects light, or spectra, from the cosmos such that it “becomes a time machine where we place those objects on a timeline that reaches as far back as 11 billion years ago,” said project director Michael Levi of Berkeley Lab.

“These vastly larger maps will allow us to make much more stringent tests of cosmological theories,” Weinberg said. “It requires a huge amount of careful work to create them, and if we're lucky they will reveal some anomaly that points us to a revolutionary new understanding of physics and cosmology.”

The scientific program will allow researchers to address with precision two primary questions: What is dark energy? And to what degree does gravity follow the laws of general relativity, which form the basis of our understanding of the cosmos?

“DESI is the most ambitious of a new generation of instruments aimed at better understanding the cosmos — in particular, its dark energy component,” said project co-spokesperson Nathalie Palanque-Delabrouille, a cosmologist at France’s Alternative Energies and Atomic Energy Commission (CEA).

The DESI collaboration is honored to be permitted to conduct astronomical research on Iolkam Du’ag (Kitt Peak), a mountain with particular significance to the Tohono O’odham Nation.

Founded in 1931 on the belief that the biggest scientific challenges are best addressed by teams, Lawrence Berkeley National Laboratory and its scientists have been recognized with 14 Nobel Prizes. Today, Berkeley Lab researchers develop sustainable energy and environmental solutions, create useful new materials, advance the frontiers of computing, and probe the mysteries of life, matter, and the universe. Scientists from around the world rely on the Lab’s facilities for their own discovery science. Berkeley Lab is a multiprogram national laboratory, managed by the University of California for the U.S. Department of Energy’s Office of Science. DOE’s Office of Science is the single largest supporter of basic research in the physical sciences in the United States, and is working to address some of the most pressing challenges of our time. For more information, please visit energy.gov/science.