When Kevin Bruggeman was 16, his mom was diagnosed with cancer.

He was by his mother’s side and helped her through the entire ordeal, but there was little he could do to alleviate the stresses and struggles she faced as a result of chemotherapy. She went on to beat cancer, but Bruggeman was left with a desire to help others facing similar anxiety-inducing conditions.

“That was the big struggle she had,” said Bruggeman, who is currently pursuing an MFA in the Department of Design’s Digital Animation and Interactive Media program. “That was always something I knew I wanted to gear my life work toward, something in the area of being able to help people in that situation.”

After a user dons a virtual reality headset and loads The Hiatus System, they find themselves in front of a temple designed by Bruggeman, who was influenced heavily by several temples that exist in Kyoto, Japan. Once the user is comfortable with their new virtual environment, they start a guided meditation process based on mindfulness-based stress reduction (MBSR). During the guided meditation, the user sees two circles that expand and contract. One circle is a breathing guide. The other circle swells and shrinks in real time to the user’s breathing, which is monitored by a belt worn around their stomach. The user is meant to match the two circles, which promotes breath awareness and mindfulness by encouraging controlled, intentional breathing.

When a user experiences The Hiatus System, two circles that indicate breathing will appear in front of them.

It’s all based on noticing your own breath, noticing the thoughts that run through your head,” Bruggeman said. “It’s about getting you out of that aspect of worrying about past things or future things and just being in the moment of what you’re doing.”

Bruggeman earned his BS in communication from Ohio University. He first thought of mixing virtual reality with meditation as an undergrad at Ohio, where he learned about stress management. He paired that with his desire to help people experiencing stressful situations, and The Hiatus System was born.

Bruggeman came to Ohio State with a vision, and the Department of Design and the Advanced Computing Center for the Arts and Design (ACCAD) helped turn it into a reality. He has since teamed up with Skylar Wurster, co-founder of The Hiatus System and a fourth-year student majoring in computer science and engineering.

“The reason I came here was because of the collaborative possibilities,” he said. “I had an idea, and I knew it was not something I could fully do just on my own. That was one of the best parts about being here was constantly being introduced to people with different expertise.”

Bruggeman and Wurster will soon unveil the software’s alpha phase, which will be available for testing. Bruggeman is working with Ruchika Prakash, associate director of the Center for Cognitive and Behavioral Brain Imaging; Marcie Bockbrader, assistant professor in the Wexner Medical Center Department of Physical Medicine and Rehabilitation; and his design advisor Susan Melsop to start a pilot study using patients with chronic brain injuries at the Wexner.

Bruggeman plans to continue developing The Hiatus System after he graduates this spring, and he hopes it can one day be used in a clinical setting to help patients who are enduring various illnesses and treatments.

“People that are going through these very stressful treatments or conditions — anxiety, depression, cancer, PTSD — I want this to be a way for them to relax,” he said. 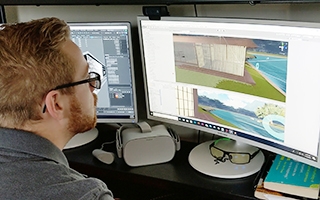