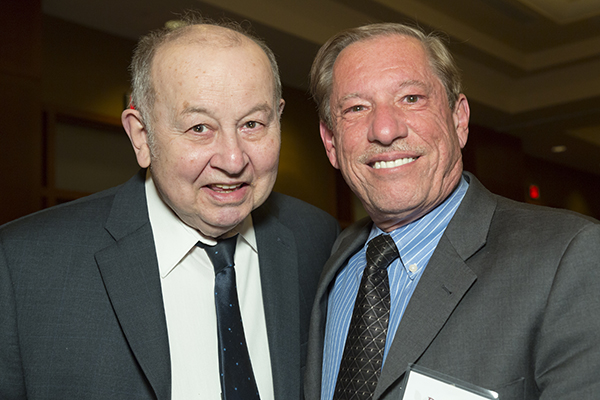 During his postdoctoral fellowship at Ohio State, Dennis Liotta learned to be competitive.

Liotta admits to hardly opening a book during his first two years as an undergraduate and spending the rest of his college years trying to erase early hits to his GPA. But he worked hard to obtain a PhD from the City University of New York, and he was inspired to complete his postdoctoral research at Ohio State under chemistry Professor Leo Paquette.

When he showed up to Paquette’s lab — a place full of bright minds with successful careers ahead of them — Liotta realized how much more he needed to do to distinguish himself.

Those lessons in Columbus paid off. Liotta launched a globally successful career in medical research from that point, becoming a faculty member at Emory University in Atlanta, co-founding the Drug Innovation Ventures at Emory (DRIVE) lab with George Painter, and serving as director of the Emory Institute for Drug Development.

Among many other drugs, Liotta is the co-inventor of emtricitabine — marketed as Emtriva — which is part of a combination of drugs that treats HIV. More than 90% of HIV-infected patients take emtricitabine. It’s an invention that has helped save countless lives, and an invention for which he hears gratitude regularly from strangers.

“It’s happened to me dozens of times,” Liotta said. “It’s one thing to know intellectually that you’re making a difference. But when individuals say to you, ‘You’ve changed my life,’ it hits home to me in a way nothing else does.”

For his work with HIV drugs, Liotta was awarded the College of Arts and Sciences’ Distinguished Alumni Award in 2013.

In the last few years, Liotta’s DRIVE lab has turned its attention to SARS-CoV-2, the virus that causes the COVID-19 disease. Upon the virus’ discovery in late 2019, DRIVE began working on a drug that would ease symptoms of COVID-19 and help save lives. The result was molnupiravir, an oral drug that received Emergency Use Authorization (EUA) for treatment of COVID-19 by the U.S. Food and Drug Administration in late 2021.

But — much like the incredible work done on COVID-19 vaccines by other groups — the quick turnaround from COVID-19’s discovery to molnupiravir’s approval was based on more than a decade of work around a class of viruses that was then adapted specifically to COVID-19.

DRIVE did analysis early in the last decade that showed about 80% of the world’s viral disease burden came from a class of viruses called single-stranded RNA viruses. So that’s where the lab decided to focus its research, knowing that if a pandemic swept the planet, it would likely be from that classification. While identifying a compound that was active against multiple viruses, the lab was able to modify the compound to make it orally available. And as they were getting ready to file for approval of this drug as a treatment for influenza in December 2019, SARS-CoV-2 began appearing in China.

The lab quickly shifted to working on SARS-CoV-2, and the earlier modification to make molnupiravir orally available gave it a huge advantage over other drugs like remdesivir, which had to be administered in a hospital.

“[Remdesivir] had to be given by infusion. You had to get it in a hospital setting,” Liotta said. “With hospitals just overwhelmed with treating patients who are sick, you couldn’t get in there.”

In a career that has spanned close to 50 years, Liotta works hard to stay on the cutting edge of medicine, science and technology. He defers credit to his colleagues, noting that he has been fortunate to work with smart, motivated people throughout. One of his secrets to productivity, he says, is to give the people who work for him the opportunity to exercise their own leadership potential.

He's not resting on his laurels, either. Even with his tremendous success with HIV/AIDS and this recent success with SARS-CoV-2, there’s never time to sit still in this field. Liotta and his DRIVE lab will keep looking ahead to potential pandemics on the horizon and making progress on treatments for other viruses that don’t have any treatments currently. That includes viruses like Epstein-Barr, which causes mononucleosis, as well as tick-borne viruses, West Nile virus and Dengue fever.

“One thing we learned from COVID-19 is that the world is a small place now,” Liotta said. “Areas that used to be considered exotic, people [can reach easily]. There are a lot of viruses that are lurking out there. We’ve only scratched the surface.”