After winning 38 consecutive games of “Jeopardy!” earlier this year — and racking up more than $1.5 million in winnings — the Ohio State alumnus and Medina native still hasn’t made a splashy purchase.

“Even if I were to get myself something nice that I like, I would view that as such an inefficient use of the money,” Amodio said. “Even if I got [some] enjoyment out of it, I would be giving myself [more] hassle over having spent the money. It would just ruin the whole experience for me.”

It’s been a wild five months for Amodio, who considers himself a private, introverted person. His first episode of “Jeopardy!” aired on July 21, where he won $40,400. A wonderful day’s work for any contestant on the long-running quiz show.

But he quickly proved that victory was no fluke. He won another $41,000 on his second episode and by the end of the month had won nine games and nearly $300,000.

Amodio is currently working on a PhD in artificial intelligence and deep learning at Yale University, but he went home to Medina to watch his “Jeopardy!” run with his family. Around the time his third full week of victories aired, he was transitioning from local news to a national “minor celebrity,” as he described himself.

People in town began congratulating him on the street, and he started receiving interview requests from news outlets around the country. After the episode featuring his 33rd consecutive victory aired, he got to travel to New York City to be on “Good Morning America.” On Twitter, he’s gotten to interact with celebrities as well, including actor Michael McKean (“Laverne & Shirley,” “This is Spinal Tap,” “Better Call Saul”), a favorite actor of his.

“This has all been just a couple months really, and so the novelty of it still hasn’t really worn off yet,” Amodio said. “This hasn’t stopped being fun.”

He got a rare hiatus in the middle of his run, as “Jeopardy!” paused between seasons. That allowed him to take some time away from the game during the summer, where he studied areas he considered his weaknesses like popular music and TV shows. He binged Netflix and the Summer Olympics. That studying paid off when he swept an Olympics category after taping resumed.

“I would have known none of them if I hadn’t watched it, so that was really rewarding,” Amodio said.

His winning streak continued through 38 episodes before he finally lost in an episode that aired Oct. 11. Of his 38 wins, 32 of them were “runaways,” meaning he could not be caught by other contestants in the final round. His 38 consecutive wins are second-most in show history, trailing only Ken Jennings. And his $1.5 million won in regular play ranks third all-time behind Jennings and James Holzhauer.

@AmodioMatt ... a haiku for you:
~~
Very smart. So smart.
Thirty eight games, lots of cash
Until next time, Matt
~~ pic.twitter.com/rliFV7ftHU

Now comes Amodio’s post-“Jeopardy!” life. He’s putting the final touches on his Yale doctoral degree, and he hopes to become a researcher or faculty member at a university when he graduates. He’ll soon be submitting applications, and maybe his name recognition will help move him to the top of some resume piles.

“It seems weird to think because answering trivia questions and being a professor don’t have a lot in common in general,” Amodio said. “But I hope so!”

Being a “minor celebrity” also produces other opportunities. He’s been approached about writing a book, an endeavor Jennings pursued but something Amodio had never considered. Other opportunities might be available in the future, but he is temporarily bound by a “Jeopardy!” contract to not make any additional money off his appearance. He’s weighing hiring an agent in the future.

Much like he’s going to be practical about his game show winnings, Amodio was also practical when it came time to decide where he wanted to go to college. A National Merit Scholar and high school valedictorian, Amodio realized he wouldn’t have to pay much to attend Ohio State. But then he came to visit Columbus to see his two brothers and quickly realized it was a great university in a fun city.

“It was a way better decision than going anywhere else,” Amodio said. “I loved my time at Ohio State. I look back fondly on it, and I’m very glad that I went there. Just absolutely proud of it.”

Amodio began his time at Ohio State on a general math track, but he switched to the actuarial science major upon learning more about it. He took statistics courses during his actuarial science path and discovered he loved the way he had to think during those classes. Upon graduation, he stuck around to get a master’s degree in statistics. After another master’s degree from the University of Wisconsin and working in private industry for a few years, he realized his love for conducting research. After he graduates from Yale, he hopes to keep doing research that interests him in the academic world.

“When you’re working for a company, the company tells you what to work on and you have to do it if you want the paycheck,” Amodio said. “But in academia they just say, ‘Research whatever you want as long as you get your papers published in that subject.’”

Wherever he winds up, Amodio owes some measure of his success to his time at Ohio State. From the engaging classes to the best friends he made in Columbus, he has no doubts that Ohio State put him on the path to future success on “Jeopardy!” and in the real world.

“Undergrad for me, it was the biggest life-changing experience of my life,” he said. “One thing that I always note is that I’ve been to many universities in my life, but I still feel the smartest people I’ve met, student-wise, were at Ohio State.” 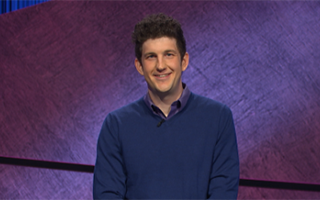