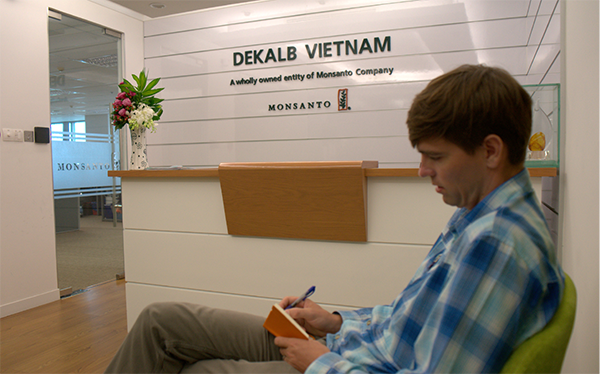 As part of research for his new book Seed Money, associate professor of history Bart Elmore did research in the United States, Brazil and, as pictured above, Vietnam.

When Bart Elmore was doing research for his first book nearly a decade ago, he found the inspiration to write his second.

That first book, Citizen Coke: The Making of Coca-Cola Capitalism, found Elmore hunting down the sourcing for each ingredient Coca-Cola uses. A trip to the archives of Monsanto — a global chemical company that provides Coke with its caffeine — made Elmore realize that the story of Monsanto itself was worth telling in deeper detail.

“Much like Coca-Cola, Monsanto is everywhere,” said Elmore, an associate professor in the Department of History. “The difference is that it’s a company that makes all these different chemicals that affect our lives, but we don’t often know it. I don’t think Monsanto is as visible as Coca-Cola is, so it was a great foil for my first book.”

Years later, following research and reporting across the United States, Brazil and Vietnam, Elmore’s second book, Seed Money: Monsanto’s Past and our Food Future, will be released in October.

The book explores the history of Monsanto from its founding in 1901, tracking the impact the company’s chemicals have had on the world for more than a century. That includes its production of Agent Orange, a high-strength herbicide used by the United States in the Vietnam War. It also includes Monsanto’s 1970s pivot from a fossil fuel-based chemical company to one that today (owned by German corporate giant Bayer) makes heaps of money in agribusiness with genetically engineered seeds and Roundup weed killer.

But Elmore also looks forward to the future in Seed Money, spelling out Monsanto’s effects on nearly every aspect of global food and materials production in the years to come.

“A sustainable future is not just about how we put fuel into our cars or how we’re going to fuel our power plants,” Elmore said. “It’s about redesigning everything from plastic bottles to synthetic fibers in our shirts. It’s about getting away from the chemical-based economy that’s so based on finite resources. That’s going to be a real challenge as we move to a new, solar-based regime.”

Like in his first book about Coca-Cola, Elmore explores environmental history in Seed Money. Not necessarily a well-known subset of the broader study of history — Elmore wasn’t even aware of its existence until he entered graduate school at the University of Virginia — environmental history combines history with environmental sciences to examine the relationship between humans and nature.

The field, born during the 1970s environmental movement, allows historians like Elmore to revisit the past and study it from a different lens. By layering in the environment, historians begin to see new trends, patterns, stories and understandings of the past that can also change how they plan for the future.

With that background, Elmore embarked on his Seed Money journey by trying to explore Monsanto’s true global impact. When he started, he had no true training on journalism basics like conducting sensitive interviews or protecting sources.

But time spent at the Washington, D.C.-based New America thinktank in 2017 and 2018 introduced him to journalist colleagues who taught him the ropes. He learned how to paint a picture for readers. He learned how to contact sources through encrypted phone services. He also began observing small details in his reporting that he might have otherwise overlooked.

In trips to Vietnam and Brazil, Elmore showed up at Monsanto offices and found sources. He interviewed one of the highest officers in the company as well as low-wage workers who feared reprisal from Monsanto. 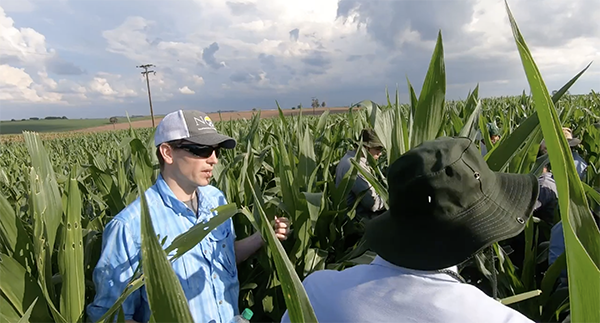 Elmore conducting research with farmers at a corn field in Brazil.

“It did feel like something more akin to Indiana Jones-type work than just sitting in the archives, and I think the book is better for it,” Elmore said. “There’s a lot more color to it than there would have been.”

Besides traveling and getting that international experience, Elmore credits faculty, students and other resources at Ohio State for enriching the book and aiding his decade-long research. In Columbus, he met with scientists in the College of Food, Agricultural and Environmental Sciences for their expertise and their network of local and national sources in the farming industry. Trips to farms around Ohio to speak with small community farmers helped him understand the reach Monsanto had in every corner of the industry.

Elmore also praised the energy, curiosity and creativity of his Ohio State students for keeping him going. In sharing his work with them during classes, they asked questions that propelled him forward and stayed after class to assist with research themselves. He has numerous Buckeye students listed in the acknowledgements for Seed Money.

“They found me smoking-gun documents in the archives on their own because they were committed,” Elmore said. “They bought into what I was talking about in class, which is that by working on these projects we can find things that can shape the future.”

In writing this book for a general audience, Elmore hopes to inform people about what’s really going on with their food supply while also showing what can be learned from the perspective of environmental history. It’s a discipline that can show the wide-reaching impacts of a global corporation like Monsanto, and it’s also a discipline that has the potential to incite large-scale change that will benefit the world.

“I didn’t think that history had this kind of power,” Elmore said. “I completely disagree with that now. I am doing science. I go to the labs, I look at the data. That’s what gets me excited every day.”