In the video, you can see the giraffe lean in. The giraffe is curious. Maybe confused? Intrigued, for sure. You can almost read its mind.

“What in the world is this flute?”

Then, Maggie McCarter — at the time an intern at the Columbus Zoo — hits the highest notes of the piece she’s playing.

The giraffe, suddenly shocked by the noise coming from McCarter’s flute, jolts backward and leaves her side. It convinces the other three giraffes in the video to flee the area as well. The giraffe has gone from curious to concerned, intrigued to intimidated.

That was exactly the point.

“We don’t want them to be comfortable with every unknown thing right away,” said McCarter, a flute performance and zoology double-major. “That’s not what a normal giraffe would do. Once they know it’s fine, they can investigate, be curious. But we wanted them to show that initial caution at first.”

Her flute performance in front of a live giraffe audience was an incredible way to combine her two majors at Ohio State while taking part in a program designed to enrich the lives of the animals at the Columbus Zoo. By introducing animals to an unusual sound or object, McCarter hoped to elicit a “prey stimulus,” getting them to react in a way they might in the wild but would rarely do in captivity.

A flute player since sixth grade, McCarter had the idea to bring her flute to the zoo and use that to trigger the prey stimulus. It worked like a charm.

And don’t worry — the giraffes eventually learned the flute wouldn’t hurt them. McCarter says some of them did wind up enjoying the music once they knew it was safe.

Soon, McCarter will be spending a lot more time with giraffes. Following her internship last year, McCarter has been offered a job as an assistant in the zoo’s Heart of Africa region as soon as she graduates in May. It’s rare to land a full-time position at a large zoo immediately after graduation, as McCarter says most people in the field must take internships or start out at smaller zoos when they first leave college. 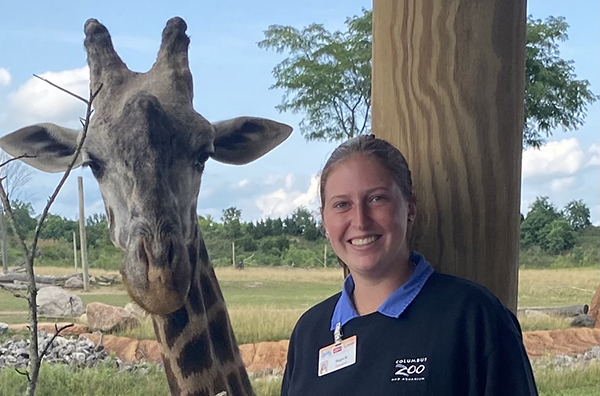 But this is a field McCarter has had her eyes on for a long time. A Gahanna native, she grew up going to the Columbus Zoo with her family’s membership plan. She remembers wanting to be an advocate for animals because they don’t get a voice in their own welfare. She grew up with cats and dogs, and currently has a black cat, Stitch, who she describes as “the best luck.”

As McCarter got older and environmental issues became more prominent, she dedicated herself to animal conservation and decided to major in zoology.

Along the way, she also picked up the flute. Her mother played as well, and it seemed natural that she also fell in love with the instrument.

When it came time to decide where to attend college, Ohio State made things easy for her. Unlike other options, Ohio State enabled her to combine her two passions by scheduling her music classes around her zoology schedule and vice versa. Advisors and professors worked together, finding ways for her to take courses out of sequence and make everything work.

“I talked to professors during my audition processes for flute, and Ohio State was one that said, ‘Absolutely, this will work. We will let you do both,’” McCarter said. “It was a main reason why I wanted to go here.”

She quickly found that she wasn’t the only one in that boat. At the School of Music, she was constantly meeting classmates who were majoring in subjects like engineering or business, fields of study that typically wouldn’t allow you to get a music degree at the same time.

“The School of Music really prides itself on allowing people to still enjoy the arts and take advantage of the gift of music but still have other interests as well,” McCarter said. “They’re very, very open to allowing people to be well-rounded and versatile. … When I leave Ohio State, I’m going to have the best of both worlds.”

She also found some overlap in the two degrees when she took an Ohio Birds course as part of her zoology degree. Studying the birds’ vocalizations and patterns was like analyzing the pitches and timbre of music.

As she worked toward her degrees at Ohio State, she initially thought a post-college career would see her working closely with primates, which are her favorite animals. But during her internship last year, she was assigned to work with giraffes. An endangered species, giraffes spoke to the part of McCarter that cared deeply about conservation.

She also got to know their personalities in a group of 16 giraffes that is among the largest in the country. She got to share her love of music with the animals, and now they’ve opened a career path for her.

“They’ve become a huge part of my life and one of my favorite animals,” McCarter said. “It wasn’t something I was seeking out, but it happened that way.”

In her upcoming job in the Heart of Africa region, McCarter expects to continue working with giraffes but also assist colleagues with lions, zebras and gazelles. She’ll be participating in conservation efforts, educating guests and plenty more.

Thanks to her time as a Buckeye, she’ll bring a well-rounded experience to her career after college. Maybe she’ll bring the flute around as well. 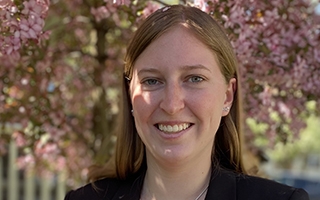