Four of the six proposals chosen for funding in the 2016 Battelle Engineering, Technology and Human Affairs (BETHA) Endowment annual grant competition are from the College of Arts and Sciences. BETHA grants support projects that examine the complex relationship between science and technology on society and cultural issues. In total, 19 proposals were submitted for consideration.

Dance in Transit is a digital humanities research project that will employ data analytics to complete the historical record of modern dance performance in the first half of the 20th century. The project explores the relation between touring performers and the modes, networks and infrastructures of transportation that link cities, countries and cultures. The result will be a publicly accessible database extensively documenting an estimated 30,000 individual performances, and a digital scholarship on mid-century African American choreographer Katherine Dunham. Dunham conducted anthropological research in the Caribbean, transformed her ethnographic observations into choreographed works for the stage and toured domestically and internationally with her dance company. Harmony Bench, assistant professor of history and theory in the Department of Dance, is principal investigator.

The Philosophical Problem for Machine Morality addresses a philosophical problem facing engineers designing autonomous machines: how to ensure that machines behave ethically. The team will conduct philosophical research to examine approaches to programming morality, develop educational materials to be used in the classroom and develop a conference at which local philosophers and engineers will be exposed to the best current work on issues about how to program machines for moral competence. Justin D’Arms, professor of philosophy, is the principal investigator.

The Revolution in Cosmology and Fr. Georges Lemaître’s Hidden God is an interdisciplinary study of the life, work and thought of the astrophysicist-priest who was one of the most remarkable figures of early 20th century cosmology. Lemaître helped lay the groundwork for the Big Bang theory, and his life and work represents one of the most interesting interactions between science and faith in the 20th century. The project will involve a collaboration between members of Ohio State’s physics, astronomy and philosophy departments to develop coursework to teach about Lemaître and the wider context of his work, a student-led STEAM project to depict the expansion of the universe and public lectures on Lemaître’s life, work and his philosophical and religious thinking. Christopher Orban, assistant professor of physics, is the principal investigator.

Wind|Farm is an experimental artwork establishing a temporary (two year), 500-square-foot, on-campus, green-energy park. The centerpiece will be a 70-foot tall, gold gilt wind turbine generating electricity to support the display of new video artworks in the Wexner Center galleries. Wind|Farm culminates a trio of Living Culture Initiative artworks at Ohio State, and will complete the rotation of this site from flowerbed to working garden, to orchard and livestock pasture, to carbon storage bank and green-energy park. Collaborators on the project include the Department of Art, the Wexner Center for the Arts, the Office of Energy Services and Sustainability and the Social Responsibility Initiative in the College of Food, Agricultural and Environmental Sciences. Michael Mercil, associate professor of art, is the principal investigator.

In addition to these funded projects in the College of Arts and Sciences, two other BETHA grants were awarded. One involves Creating Oral Histories by Fostering Digital Technological Literacies in Jamaica; Valerie Kinloch, professor of literacy studies in the Department of Teaching and Learning, will lead the project. The other is an Interactive Teaching Station for Child Restraint Installation, led by John Bolte, associate professor of mechanical and aerospace engineering, and associate professor, Division of Anatomy.

Project descriptions courtesy of the Office of Research 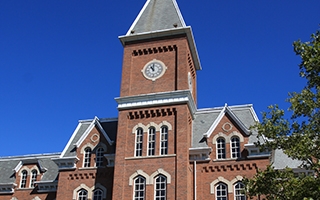