Chase M. Ledin (BA ’14) has been instrumental in Ohio State’s process of implementing gender-inclusive housing, which allows people of many genders — specifically students who identify as LGBTQ — to have safe and supportive residential spaces on campus. Ledin drafted a proposal to present to the Office of Student Life and thanks to his efforts, along with the two other members of his team, Katie Matuska and Ben Weekes, gender-inclusive housing will be available this fall.

Ledin was an Honors student, majoring in English and sexuality studies when he became interested in the idea of gender-inclusive housing after attending the Midwest Bisexual Lesbian Gay Transgender Ally College Conference. It inspired him to conduct research to explore the potential for implementing gender-inclusive housing at Ohio State. Ledin presented his findings at the Denman Undergraduate Research Forum as a senior and earned second place in the humanities division.

“The research I presented was very unique and uncommon for the forum, so it helped garner a lot of exposure for gender-inclusive housing,” said Ledin, who now works in the Department of English as an administrative associate.

Today about 155 universities have gender-inclusive housing accommodations, though many of these universities are private. Ledin looked to schools like the University of Michigan and New York University for public university models that worked.

“Chase’s research was essential to the proposal to offer gender-inclusive housing at Ohio State because it showed, first, that Ohio State was out of step with most major universities by not offering this option,” said Debra Moddelmog, chair of the Department of English and Ledin’s advisor on the project. “Second, it showed that gender-inclusive housing can benefit many more students than those who identify as trans or gender-nonconforming, but that it would most benefit the latter by providing safe and welcoming living spaces.”

Michael Inman, sophomore marketing major and student member of the Scarlet and Gay board, said, "I feel gender-inclusive housing is an option every university in the nation should create for its students, especially an institution as large and influential as The Ohio State University. Making sure all students feel comfortable and accepted here on campus should always be a priority, but even moreso in their place of residence.”

At Ohio State, the accommodations will be offered in the South Campus Gateway in the fall and are available to students in their second year. The two-bedroom apartments house four students and have two private bathrooms in the suite. Ledin hopes Ohio State will use gender-inclusive housing as a tool to engage with LGBTQ issues on campus.

“Ideally, gender-inclusive housing would create a learning community that is not only academic but has social aspects as well,” said Ledin. “But the main goal is to make students comfortable and safe during their time at the university.” 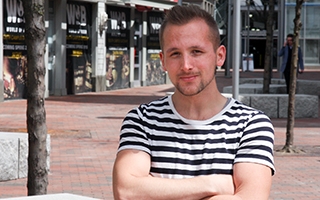