Geography PhD candidate travels the world to know the world 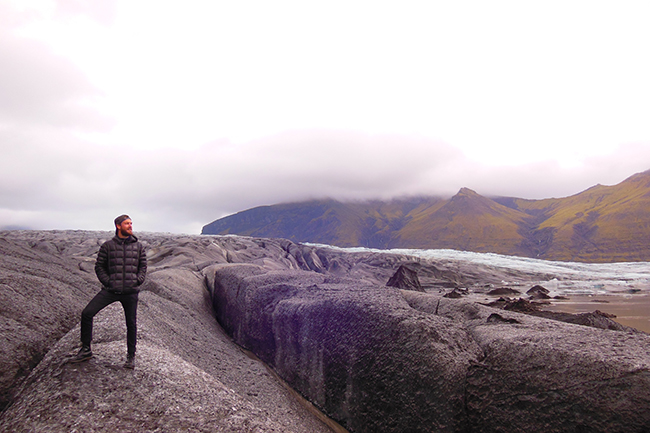 Forrest Schoessow, a PhD candidate in the Department of Geography, stands on a glacier in Iceland in September 2014.

Our planet is alive.

Earth is a dynamic and interconnected system with a rich and unfathomable history that spans millennia. Its rolling rivers snake through the landscape. Its mighty mountains scrape the skies. Its oceans and lands teem with life that feast on its abundant resources and influence the course of its future.

Forrest Schoessow — a PhD candidate in the Department of Geography — has spent most of his life exploring the world, trekking across its diverse terrains and studying its various workings. He canoed the length of its fourth-longest river, the Mississippi, which winds its way over 2,300 miles from northern Minnesota into the Gulf of Mexico. He once set out to voyage west from South Korea to the United States — a daring adventure that covered over 11,000 miles — without using an airplane. From Bolivia to Jordan, Scotland to Mongolia, Schoessow has left his footprint on the sands, snowdrifts and soils of locales around the Earth.

“I study Earth sciences, the globe, the interconnectedness of nature and humanity,” he said. “How can I study the planet without knowing the planet? How can I study global phenomena and planetary processes without having an appreciation of the scale?” 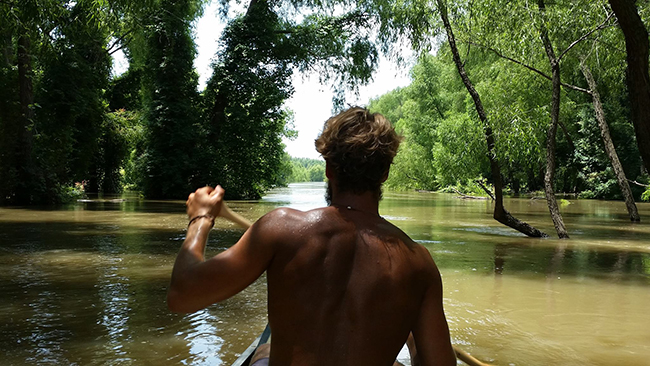 Schoessow paddles a canoe down the Mississippi River.

“Specialization is For Insects”

Schoessow’s fascination with his world was instilled in him at a young age. He grew up in the cornfields of western Ohio, spent the summers of his childhood visiting national parks and dreamt of traveling to the places featured in his collection of National Geographic magazines.

Schoessow earned a BA in history from Ohio State in 2011 before receiving an MS in geography from Utah State University’s College of Natural Resources in 2017. He then returned to Ohio State and is set to receive his PhD in 2021.

But his education goes far beyond degrees and classrooms.

In the spring and summer of 2012, he served as a member of the Montana Conservation Corps, where he led expeditions through the wilderness of Montana, Idaho and Wyoming. His mountaineering experience includes ascending the 19,973-foot Huayana Potosi in Bolivia, the 13,533-foot Kings Peak in Utah and the 14,422-foot Mount Harvard in Colorado. He’s skilled in GPS techniques, navigation and map reading and has training in avalanche and emergency medical response.

Robert Heinlein once said, ‘Specialization is for insects,’” Schoessow said. “So I try to diversify my skillset as much as possible.”

Schoessow’s academic and research interests were shaped during his cross-country journey from South Korea to the United States. His trek began in February 2014 after he taught English, math and science in South Korea, and it lasted about seven months. From the Korean Peninsula, he made his way to Vladivostok, Russia, before moving westward through Mongolia and back into Russia, where he stopped at the largest lake in the world, Lake Baikal. He traversed Siberia and crossed the Arctic Circle into the Russian port city of Murmansk. He then descended south through Finland, Sweden, Norway and Denmark before catching a ship to Iceland.

By then, it was late August. While Schoessow contemplated his next move, a hurricane and a volcano simultaneously struck Iceland. The country was hit by Hurricane Cristobal, a rare north Atlantic cyclone that caused flooding in the capital city, Reykjavík, shuttered the country’s shipping lanes to nearby Greenland and destroyed Schoessow’s tent and many of his belongings. At the same time, the Bárðarbunga volcano erupted. Though the storm forced Schoessow to abandon his goal of getting back home without flying, his experience in Iceland inspired an interest in natural hazards.

“After those two events, I was like, ‘Man, nature is crazy and this island is crazy and what is going on here,’” he said. 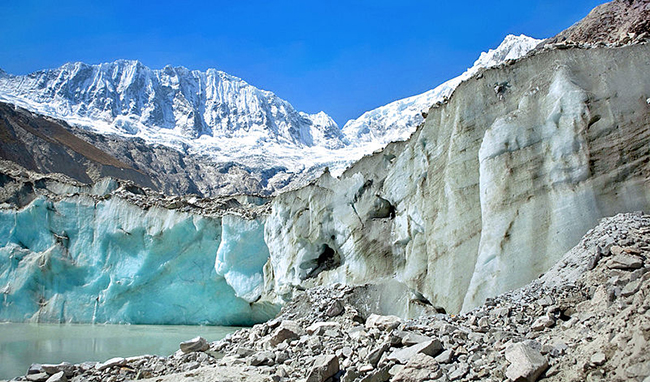 The Llaca glacier, which is nestled in the Andes' Cordillera Blanca mountain range in Peru.

The Frontlines of Climate Change

High in the tropical Andes of Peru, glaciers gradually carve colossal ravines through the mountains and valleys. The Cordillera Blanca, which stretches 120 miles across Peru’s Ancash region, is the largest tropical ice-covered mountain range on Earth. It is home to 71% of the planet’s tropical glaciers, which are essential for South Americans who rely on the meltwater for agriculture, hydropower and drinking water.

Over the years, however, climate change has hastened the glaciers’ retreat, according to Lonnie Thompson, Distinguished University Professor in the School of Earth Sciences.

For over 40 years, Thompson — who is also a senior research scientist at the Byrd Polar and Climate Research Center — and his team of climatologists have studied the glaciers nestled within the Andes, watching the massive ice sheets slowly disintegrate over the decades.

In December 2018, Thompson and other researchers presented on the Andean glaciers at the annual meeting of the American Geophysical Union in Washington, D.C. According to their research, the glaciers are melting at a faster rate than they have at any point in the past 10,000 years.

“Supply is down. But demand is up because of growing populations,” Thompson said. “By 2100, the best-case scenario is that half of the ice will disappear. Worst-case scenario: two-thirds of it will. And you’ve got all those people depending on the glacier for water.”

“These people are the canaries in the coalmine,” Schoessow said. “They’re experiencing it. They’re on the frontlines of climate change. They talk about the water crisis in California or in Las Vegas? That pales in comparison to what is going to happen here.”

Schoessow’s advisor, Professor of Geography and the State Climatologist of Ohio Bryan Mark, has pioneered the way the glaciers in the tropical Andes are studied. In 2008, Mark led the first airborne laser-scanning missions over tropical mountains to measure ice volume changes. His work has furthered scientific understanding of how tropical glacier retreat impacts water quantity, water quality and hazard risk.

To find out more about the ice loss in the tropical Andes, Schoessow formed the Mountain Drone Team. The team is part of the Byrd Polar and Climate Research Center’s Glacier Environmental Change Group, which is headed by Mark. Schoessow recruited undergraduate and graduate students from across Ohio State’s campus, borrowing expertise from a diverse array of disciplines.

The team developed the RANGER System, a heavy-lift, high-altitude drone capable of comprehensive 3D laser mapping of mountain environments. Outfitted with sensors that can read the Andean glaciers in stunning detail, the drone observes glacial ice volume, changes in volume over time and the ice’s surface energy budget. It also allows for new, 3D models that can be used to create hazard simulations. 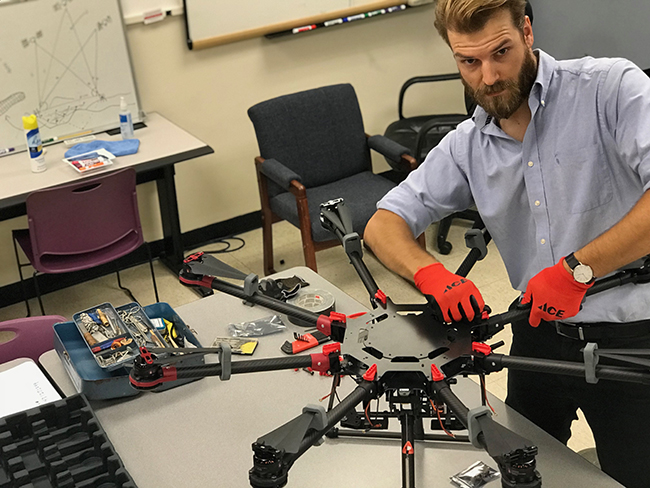 The team tested the drone’s capabilities in August 2018 and successfully created a 3D map of a glacier in Nevada’s Great Basin National Park. In summer 2019, the team will travel to Peru, where the RANGER System will spend three months collecting data from the Andean glaciers.

“We’re witnessing the destabilization of the tropical cryosphere, and what that’s going to look like is completely up to us right now,” Schoessow said. “It’s imperative that we understand what’s happening, observe the rate of change and figure out what we can do to get that information to local decisionmakers and come up with a better plan moving forward.”

A model of a glacier at Great Basin National Park in Nevada using data collected from the RANGER System.

Ohio State is Where Things Happen

The Mountain Drone Team started as an idea, an abstract formulation Schoessow was determined to see come to fruition.

The collaborative nature and scientifically tenacious and bold attitude at Ohio State, he says, was critical in getting the project off the ground and turning it into an opportunity for climate researchers to peer into Earth’s future with more clarity than ever before.

The project is in partnership with the Byrd Polar Climate and Research Center, the Ohio Supercomputer Center, the School of Earth Sciences, the Department of Geography, the Gary and Connie Sharpe Innovation Commons and the College of Nursing’s Innovation Studio.

“You’ve got a team of students that all were united by a flier I put up on campus saying, ‘Hey, we’re trying to do this crazy thing that’s never been done before,’” Schoessow said. “So many people contacted me to say, ‘Let’s go for it.’ A year ago, this was a pipe dream, but thanks to Ohio State’s support, we’re doing it. … I can’t imagine a place with more resources, and I’m super proud to be here at Ohio State. There’s no place I’d rather be.”

Schoessow isn’t quite sure where he’ll land after his PhD. He wants to continue research. He sees himself as a postdoc. Or maybe as a professor. Or maybe somewhere in the mountains. His options are as endless and vast as the planet he studies.

Whatever Schoessow does next, he’s confident his time at Ohio State — as an explorer, scientist and student — will be a key step in an ever-evolving and exciting journey.

“I know that Ohio State and the Byrd Polar and Climate Research Center are uniquely preparing me to be an extremely competitive candidate for any job market,” he said. “I’m excited to see what the future holds.” 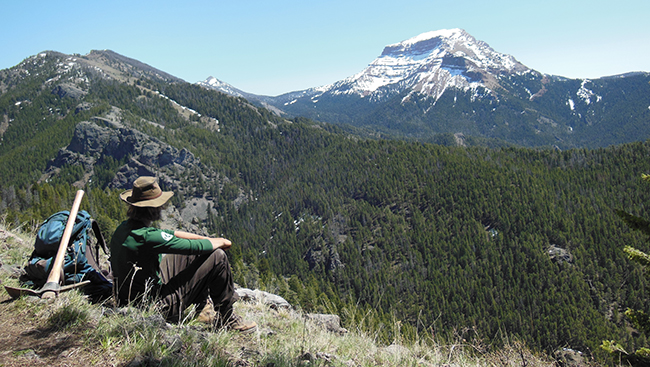 Schoessow sits among the Montana wilderness. 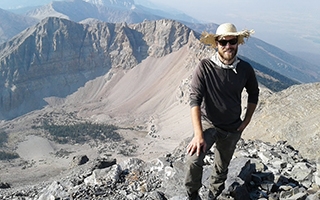