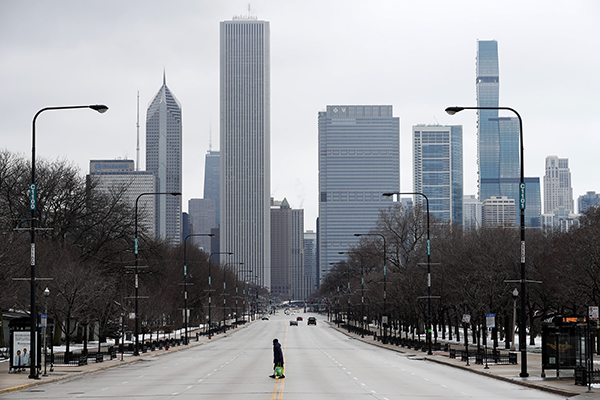 An elderly woman walks across the usually busy Columbus Drive that splits Chicago’s Grant Park in half, on the first work day after Illinois Gov. J.B. Pritzker gave a shelter in place order on March 23, 2020. (AP Photo/Charles Rex Arbogast)

During the last 16 months, multiple news events might have qualified as “story of the year” — had it been a slower year.

That time frame included a presidential election that spawned an insurrection in the United States Capitol. It saw social justice protests caused by police and racially motivated killings. And the COVID-19 pandemic changed just about every aspect of day-to-day life.

For journalists, it was hard to know where to begin.

“The velocity of the last 16 months, the permanence of the unsettled nature of what everyone was dealing with, was something that even when you look back at it now seems completely made up,” said CNN Senior White House Correspondent Phil Mattingly, a 2006 Ohio State English graduate. “From a journalistic perspective it’s mind-blowing to look back now and see all the different things we were trying to cover and provide context for.”

Mattingly is far from the only Ohio State journalist forced to work in the pandemic world. When society changed in March 2020, reporters adjusting to a new reality were bombarded with stories that would challenge them even in the best of times.

Chicago-based Associated Press photographer Charles Rex Arbogast, who graduated from Ohio State’s photography and cinema programs in 1985, had to find new ways to photograph subjects and showcase the impacts of the pandemic. From empty baseball stadiums to socially distanced voting lines and tightly packed protests, Arbogast’s images made the pandemic tangible.

In Bowling Green, Kentucky, and later in Columbus, 2019 journalism graduate Jamilah Muhammad — in her first full-time job with Spectrum One News — dealt with isolation in a new city while reporting facts for viewers.

For those alumni, looking back brings a chance to reflect and digest. But in March 2020, none of them knew what was coming.

The Associated Press (AP) has covered global news for nearly two centuries. But the coronavirus provided the AP with a first.

“It was the first time in the history of the AP that every staff member was working on the same story,” Arbogast said. “For us in the business, that was just mind-boggling because there’s been other great moments that have touched people globally, but not everybody was working on it.”

When the U.S. went into lockdown in mid-March, Arbogast needed to capture that impact for a global audience.

He found himself in a desolate downtown Chicago, photographing normally packed intersections that were now nearly carless. He wandered past bus stops at night, capturing the silhouette of a single, masked rider. By the summer, he was at Wrigley Field — home of the Chicago Cubs — watching foul balls go unclaimed because fans weren’t allowed inside.

“In any other game, that ball would never be sitting there,” he said. “People would have grabbed for it.” 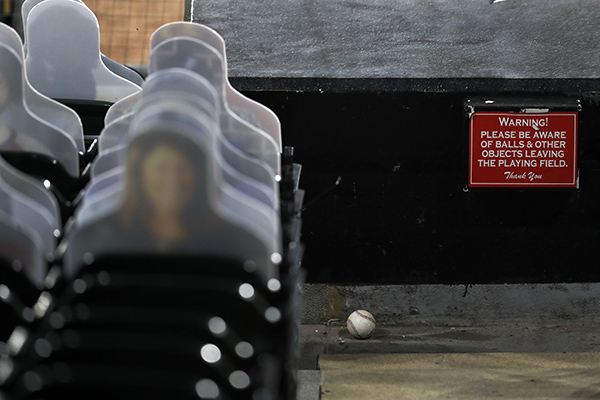 A foul ball sits in the stands between cardboard fans and a warning sign about baseballs leaving the field of play, during a baseball game between the Chicago White Sox and the Cleveland Indians on Aug. 7, 2020, in Chicago. (AP Photo/Charles Rex Arbogast)

Muhammad had little time to become familiar with the professional world in her first full-time job with Spectrum News One in Kentucky before everything changed. Normally focused on character-driven, human-interest stories, Muhammad would have several days to conduct in-person interviews, get to know her subjects and put pieces together.

But in March, the directive changed. In a bureau all by herself, she began publishing content daily and relying on Zoom and other remote technology. While interviewing Kentuckians trapped on a cruise ship, she realized this might be the new normal for the foreseeable future.

“I think I came out of it a totally different journalist,” Muhammad said. “I had to work and learn so quick, because if you didn’t, you’re getting left behind.”

Even Mattingly, with the power and resources of CNN behind him, found things difficult early on. He was a congressional correspondent at the time, and face-to-face interactions with legislators dissipated as “Congress basically disbanded for the first two months.”

Instead, Mattingly used his time to cover how small businesses in America were getting by. Finding those stories was more complicated than when his sources were just down the hall in the Capitol.

And then, just as the pandemic was becoming potentially the biggest story ever, social justice protests swept the globe.

Ahmaud Arbery, an unarmed Black jogger, was killed in Georgia on Feb. 25, 2020. Three weeks later, Breonna Taylor was killed by Louisville plainclothes police officers in her own apartment. George Floyd was murdered by Minneapolis police officer Derek Chauvin on May 25.

Muhammad, who is Black, felt the stresses of reporting on that gigantic, national story as a young journalist, but she also dealt with the emotional toll of an issue that touched close to home. She frequently traveled from Bowling Green to Louisville to report on protests tied to Taylor’s death and recognized the tremendous strain the protesters were experiencing.

“Breonna Taylor could have easily been my friend, my niece, anybody I know,” Muhammad said. “It’s different to grapple with that in a professional space because you have to stay professional. But at the same time, you’re experiencing everything those protesters are.”

The number of protesters is growing in Jefferson Square Park tonight. @jmuhammadtv speaks with protesters who say they just want peace and to be able to mourn. pic.twitter.com/iWbuLzNgiJ

Mattingly found that the protests quickly became tied up in other news stories he was covering. Though they were not strictly political, they quickly enveloped a political world gearing up for a presidential election.

“You couldn’t view these things in isolation,” Mattingly said. “What was happening with George Floyd, with the protests, that was not just George Floyd and Minneapolis. It was the entire country. … To the detriment of what the protests were about, it quickly became intermingled with politics.”

Muhammad and Mattingly both utilized resources available to them through their companies. Muhammad said her editors at Spectrum News were willing to listen to her ideas whenever she raised concerns about their coverage. Mattingly said CNN had internal personnel for mental health support and to educate staff on sensitive topics. Those resources were not just valuable, he said, but a necessity. 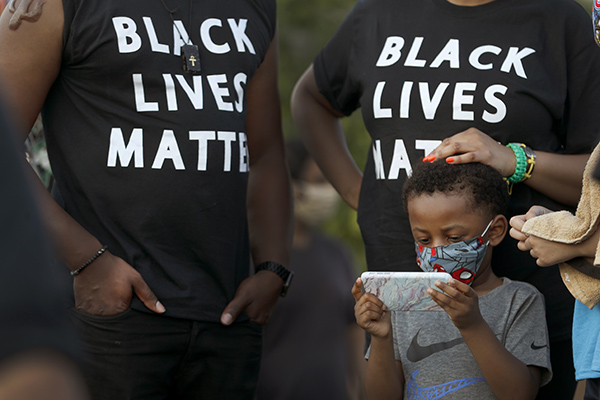 People attend a peaceful rally in Chicago, Friday, June 19, 2020, to mark Juneteenth, the holiday celebrating the day in 1865 that enslaved Black people in Galveston, Texas, learned they had been freed from bondage, more than two years after the Emancipation Proclamation. (AP Photo/Charles Rex Arbogast)

THE 2020 ELECTION AND AFTERMATH

In an already tumultuous year — with a divisive president running for reelection and the balance of the U.S. House and Senate on the line — the first Tuesday in November promised to be a memorable day.

Instead, it turned into a memorable week and then a chaotic three months, with the presidential race undecided until four days after the election and the Senate unsettled until a pair of runoff elections in Georgia on Jan. 5.

And then, on Jan. 6, hundreds of people stormed the United States Capitol. 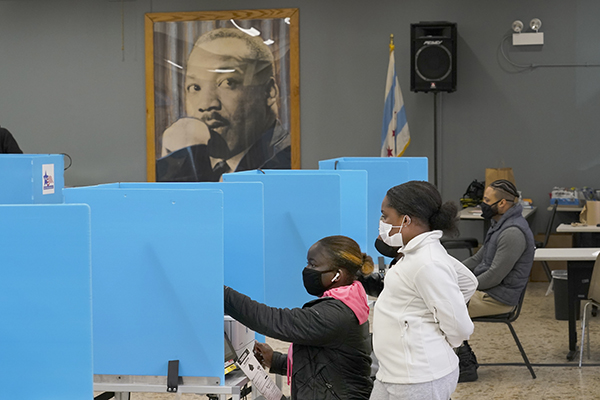 That time was a whirlwind for Mattingly, who got major screen time on CNN during election week. He manned CNN’s “Big Board” in 12-hour spells, relieving John King and barely sleeping when he was off the air. During that tense week, with unfounded rumors and theories swirling, Mattingly took comfort in data.

“In moments like that — where there’s so much misinformation going around and so many questions about things — being able to utilize data, nothing else, is extraordinarily valuable,” Mattingly said. “You recognize that this is the biggest thing in the world, and it was cool to be part of a moment that you knew mattered, however it broke politically.”

Less than two months later, Mattingly was at the Capitol when it was breached. Initially across the street at the Russell Senate Building, he headed underground and toward the Capitol with his camera when he got texts from staffers saying something was happening.

“You have no concept about just how bad it could have been until two or three days after and you started seeing the videos and realizing who was actually there,” Mattingly said. “If my knee was fine and I took the stairs, I would have run into all those guys chasing Officer [Eugene] Goodman up the stairs.”

On Election Day, Muhammad was still working in Kentucky. But in the new year, she was transferred to the Spectrum News One bureau in Columbus, back in her hometown and with family nearby. She saw what the election looked like in Kentucky in November before covering the threatened storming of the Ohio Statehouse in January.

“I joke with my grandmother all the time because she says, ‘You need to write a book. You’ve been a journalist for not even two years and look at all you’ve had to endure,’” Muhammad said.

As I clock out for the night, I wanted to share one of my favorite interviews from today. Originally from Bangledesh, Ali Miah, has been in the U.S. since 2007 and says he votes to bring peace and love. Stick with @SpectrumNews1KY for all of your election coverage tonight! pic.twitter.com/TzJTmSnndF

As a photojournalist, Arbogast is always self-aware of his physical presence. While shooting photos, he needs to capture candid moments without interfering. That feeling was heightened during the pandemic, with social distancing and mask-wearing always a concern for blending in while getting close to his subjects.

“I’ve still got to be conscious of who is wearing a mask,” Arbogast said. “If they’re wearing one in front me, do I wear one in front of them?”

That’s just one extra thing to consider going forward as our journalism alumni do their jobs daily.

A back-to-basics approach has worked for Mattingly, and it’s something he’ll use going forward. He got to speak to more people who weren’t politicians over the last year and told their stories.

“I had a better understanding of what was going on in the country and why the things I was covering policy-wise mattered because I was talking to people on a daily basis,” said Mattingly, who is now CNN’s senior White House correspondent. “That shouldn’t have to be a reminder, but it was a very good and valuable one for me in this process.”

Muhammad, meanwhile, had about as hectic a start to her career imaginable. The pandemic was one thing, but the weight of the first two years of her profession can be hard to calculate.

She quickly learned the value of mental health, a support system nearby, and editors and bosses to whom she can share her concerns. She also saw how being embedded in your community can build better relationships, and that makes for better stories.

Those are lessons she hopes to bring to whatever the universe has waiting for her.

“Will I ever have a normal reporter lifestyle and career? I don’t know,” she said. “But I’m excited to find out. Every single time I feel like this is it, this is the craziest it can get, something tops it. When you see me reporting on aliens, don’t be surprised. And I’ll be doing it like it’s nothing, because I’ve had the preparation for it.” 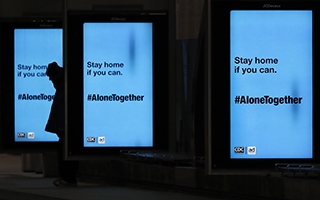