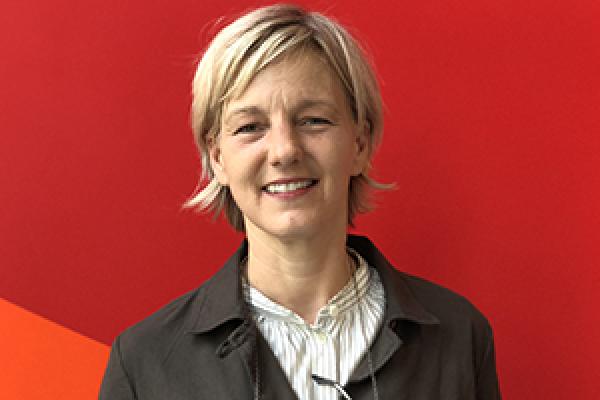 Following an international search and formal approval from Ohio State’s Board of Trustees, Jody Patterson, PhD, has been named the first Roy Lichtenstein Foundation Chair of Art History. She joined the faculty in the Department of History of Art as an associate professor in August.

Patterson comes to Ohio State from the University of Plymouth in the United Kingdom, where she served as associate professor and head of the art history department. Patterson is a specialist on art and politics in the mid-twentieth century, and her research explores mural painting and the democratization of culture through public art.

“I am delighted to be sharing in the legacy of Roy Lichtenstein at Ohio State and to be joining such a thriving and dynamic art history department. Lichtenstein enriched the development of modernism, both in the United States and internationally, and I look forward to cultivating a renewed interest in the histories of American art amongst the students and broader cultural communities at Ohio State,” said Patterson. “Lichtenstein’s work often involved contemporary social and political issues and this is something that I hope to engage through my own teaching and research here in Columbus.”

Patterson earned her PhD in art history from University College London and subsequently held a Terra Foundation for American Art Postdoctoral Teaching Fellowship at the École normale supérieure (ENS) in Paris. She brings a truly international perspective to the study of American art. The author of numerous book chapters, articles and reviews, her most recent monograph — Modernism for the Masses: Painters, Politics, and Public Murals in 1930s New York — is due out from Yale University Press this year.

This past year, the Lichtenstein Foundation expanded upon their support of the university with the gift of the Modern Head sculpture. Located in the green space between Smith and McPherson Laboratories, Modern Head is a special 2018 cast fabricated in memory of the artist for Ohio State. Fabrication was funded by the Ohio Percent for Art Program.

The university will celebrate the formal installation of the Roy Lichtenstein Chair of Studio Art and the Lichtenstein Foundation Chair of Art History, along with the public dedication of Modern Head on Wednesday, Sept. 11.

Roy Lichtenstein, one of the most influential and innovative artists of the second half of the 20th century, is preeminently identified with pop art — a movement that he helped originate. Lichtenstein received his BFA and MFA from Ohio State in 1946 and 1949, respectively, and taught studio art classes at the university in the late 1940s and early 1950s. After his death in 1997, the Roy Lichtenstein Foundation was created to facilitate public access to his work and to develop and educate the next generation of artists, curators, critics and scholars.