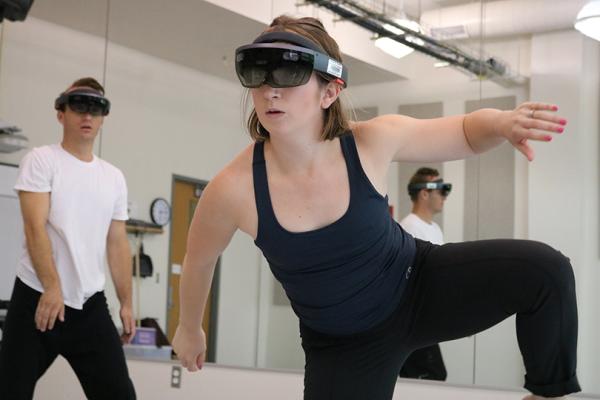 The Department of Dance’s augmented reality software, LabanLens, is transforming the way the art and history of dance are studied, researched, created and performed.

Spearheaded by Hannah Kosstrin, assistant professor of dance, and Chris Summers, Arts and Sciences Technology Services and Department of Dance media manager, LabanLens is paired with the Microsoft HoloLens AR headset, which projects three-dimensional images into the user’s perception of the real world.

LabanLens users use a drag-and-drop method to pull Labanotation symbols, used by dancers to identify and score individual body movements, from a queue and place them onto a vertical score — much like how a musician notates musical symbols for a musical composition. Each symbol on the score signifies a different movement the dancer makes, and when it is ready, the dancer performs the corresponding symbol as it scrolls down the score.

“It’s completely kinesthetic,” Kosstrin said. “When we have done this in the past, either through making a score to make a dance or reading a documentary score to learn a dance, you’re bound to a piece of paper or sometimes people will flash it on overhead projectors. But then you’re still bound to that part of the room. [LabanLens] is doing it better and bringing it into a virtual environment that people are learning how to be in.”

Added Summers, “The learning outcomes are really exciting because you’re in the space with your score. You’re improvising as well as documenting at the same time, which is really important especially for dancers.”

Michelle Sipes and Josh Anderson, graduate students in the Department of Dance, recently had the opportunity to use LabanLens for the first time. Despite never using the AR software before, Sipes, who’s entering the second year of her master’s program, and Anderson, who’s entering his third year, found the device to be user-friendly and straightforward.

The pedagogical implications of LabanLens are vast, and Kosstrin and Summers say its current capabilities only scratch the surface of the software’s potential. LabanLens, which has been funded and supported by Arts and Sciences Technology Services, is completing its first phase of development by Columbus-based technology company Immersive.is. Kosstrin and Summers have goals for the software that have yet to be implemented.

The next step includes digital avatars that perform a created score. That avatar can be scaled up or down, meaning the user can either watch the avatar dance on a desk or alongside them in a studio. The user, they plan, will also be able to plug in Labanotation symbols to see what it looks like for the digital dancer to perform them.

Further down the road, Kosstrin and Summers envision uploading established dances scored in Labanotation into the LabanLens so researchers can watch and study them. Ohio State’s Jerome Lawrence and Robert E. Lee Theatre Research Institute is the repository for a large amount of 20th- and early-21st century dances compiled, notated and curated by the Dance Notation Bureau, drawing international researchers to the collection each year. Since many of the dances either don’t exist on film or have films that are difficult to access, LabanLens will make the Dance Notation Bureau collection accessible to many more researchers.

“[Someone] would be able to put on the HoloLens, set the parameters, and be able to see the dances from these scores,” Kosstrin said. “So researchers can use and study these scores even if they don’t necessarily read Labanotation.”

While LabanLens currently functions as a tool for dancers to create and document their own dances, Kosstrin and Summers are looking to grant funding to continue the software’s next phases of development. The current phase of LabanLens in development will be a part of Kosstrin’s curriculum this fall.

The Department of Dance has two HoloLens headsets on loan from Arts and Sciences Technology Services, and both are equipped with the LabanLens software. Kosstrin plans on using the headsets in her graduate course, Dance 6301: Laban Systems: Movements, Methods, and Analytical Frameworks, and will make them available to the undergraduate Laban course Dance 3301.

After testing LabanLens this summer with colleagues and graduate students, Kosstrin and Summers look forward to the possibilities students will further discover in their classes and research projects this fall.