Beyond the newsroom: Lantern journalists step up to provide coronavirus coverage

Reporters around the country have been working tirelessly to ensure their communities stay informed with the latest information regarding the coronavirus pandemic.

The journalists at The Lantern, Ohio State’s student newspaper, are no different.

“I’ve been super proud of what they’ve been doing,” said Spencer Hunt, lecturer in the School of Communication and faculty advisor for The Lantern. “This group has really taken to heart and internalized all the things they’ve experienced this year, and they’re applying it now to a situation we’ve really never seen before.”

The coronavirus is a complicated, multifaceted story that is evolving daily. Its effects have reverberated around the globe, affecting economics, transportation, athletics, business and health care.

As those waves rippled across Ohio State, administration has taken swift action to keep the university community safe. From restricting international travel to suspending face-to-face classes to canceling athletic events, the coronavirus’s impacts on campus have been abrupt and jarring, and The Lantern has been at the forefront of the breaking news to keep Buckeyes up-to-date amid the chaos and uncertainty.

I chose journalism because I wanted to help people and give them the information they need to make decisions,” said fourth-year journalism major Kaylee Harter, editor-in-chief of The Lantern. “To me, this is why we all wanted to be in journalism. I genuinely feel like we’re providing this public service right now to the Ohio State community.” 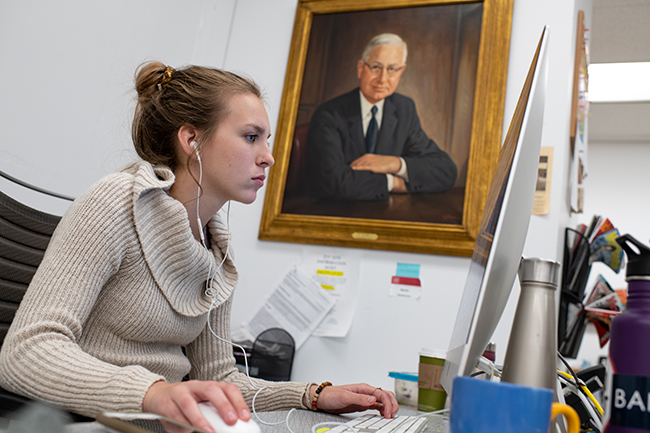 Harter was poolside in Mexico on spring break when Ohio State announced on March 9 that face-to-face instruction had been suspended and that classes were moving online. She ran back to her hotel room and fired up her laptop to start writing, editing and planning how The Lantern would cover the developing story.

Since then, reporting on the coronavirus has been an around-the-clock endeavor.

“When coronavirus started breaking, my first reaction wasn’t as a student,” said campus editor and third-year journalism major Sam Raudins, who will serve as editor-in-chief next year. “My first reaction was to start covering it.”

The Lantern has a webpage devoted entirely to its coronavirus coverage. Click here for the most up-to-date stories.

Fourth-year journalism major Griffin Strom was in Indianapolis preparing to cover Ohio State in the Big Ten Conference men’s basketball tournament. On the morning of March 12, The Lantern sports editor was leaving his hotel to scope out the basketball arena when he learned the tournament had been canceled.

At that moment, Strom shifted gears. Instead of covering the Buckeye men’s basketball team, he began reporting on the shockwaves the coronavirus was sending across the Ohio State sports landscape. The dominoes were falling fast — from the conference tournament to the NCAA Tournament to the entire Big Ten spring sports schedule — and Strom was adapting on the fly to the bombardment of news.

“We’d never encountered a situation where things happened that fast,” Strom said. “We had to be on our toes more so than any other time all year. Every few minutes, it was like something you’d just put out was already old news because there was something new happening. It was definitely an invaluable experience.” 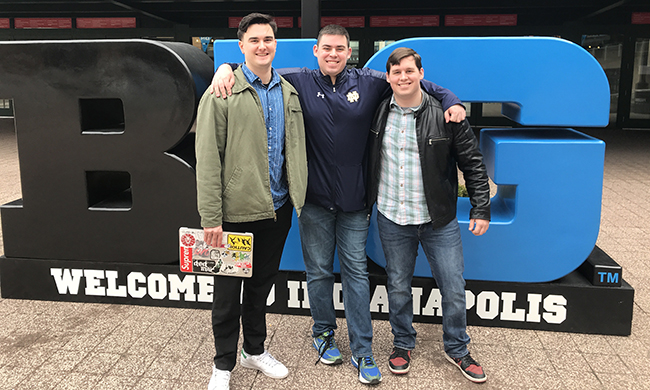 From left: Griffin Strom, Lantern Sports Director Brian Nelson and Lantern Assistant Sports Editor Andy Anders in front of the Bankers Life Fieldhouse in Indianapolis shortly after it was announced that the Big Ten Conference men's basketball tournament was canceled.

After the initial news onslaught, The Lantern had a chance to regroup and strategize content about the fallout caused by cancellations, restrictions and suspensions. From reporting how international students were impacted to a story on seniors reflecting on their semester being turned upside-down, the newspaper’s coverage expanded to include a broader picture of the coronavirus’s ramifications.

“Our entire staff is dedicated to covering Ohio State,” Harter said. “We’ve been able to provide some pretty in-depth coverage and look into some things beyond what’s breaking.”

One of The Lantern’s most recent projects is “Lantern Lites,” a daily, 15- to 20-minute podcast hosted by sophomore journalism major Kevin Lapka that covers the latest coronavirus developments. Guests have included several Lantern reporters and Ohio State spokespeople.

Lapka has experience with podcasting, and the medium is something he’s interested in pursuing in the future. Hosting “Lantern Lites,” which is influenced by other daily news podcasts such as NPR’s “Up First” and The New York Times’ “The Daily,” is an opportunity for Lapka to cover the pandemic from a variety of angles. 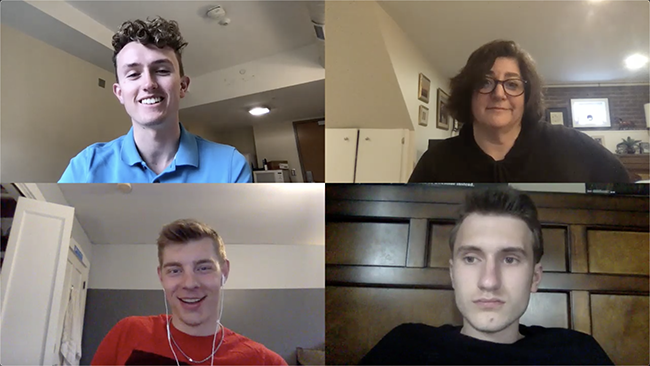 “Everybody [at The Lantern] is adjusting to the situation, and they’re informing the people,” Lapka said. “Being able to respond and adjust in such a pressure-filled time is more valuable than anything.”

Covering the coronavirus for reporters — especially those who also have to navigate their lives as students — can be emotionally and physically draining. But the journalists at The Lantern are rallying together to serve their community as a team.

And when the dust finally settles, The Lantern’s dogged news team will know its efforts in the face of unprecedented adversity made a difference.

“We love doing this, and we know it’s necessary work,” Raudins said. “It’s exhausting, but it’s worth it.”

Added Harter: “Without the team we have and the support we have, it would be a lot harder. But everyone has done such a great job coming together to support each other. … If there’s anything this all has shown me, it’s how close a bond all of us have and how much we all look out for each other.” 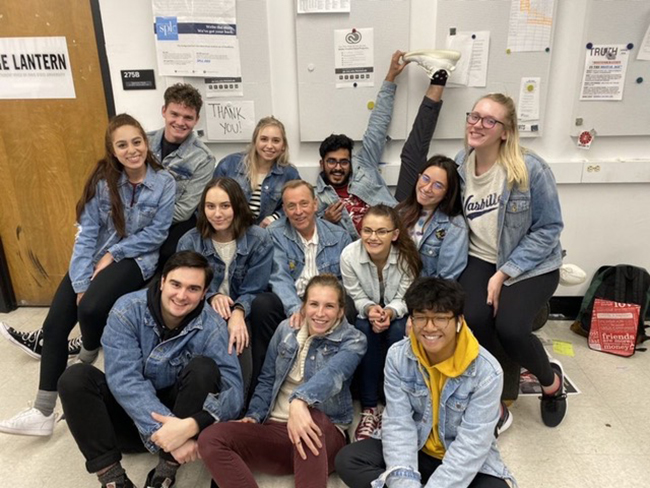 The Lantern journalists' weekly tradition of sporting denim in the newsroom. 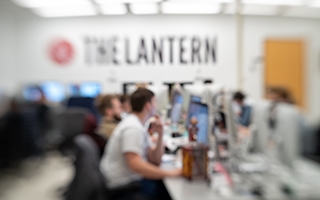