Using next-generation sequencing approaches, the researchers will estimate phylogeny for up to 90% of Penstemon’s 280 + described species to investigate why this species-rich genus has diversified so rapidly across North America.

Kubatko’s group has developed new methods of analyses for phylogeny reconstruction that can handle such enormous amounts of data. Additionally, they are working on new modeling methods to examine patterns of hybridization throughout the genus.

The researchers believe that Penstemon has the potential to become an iconic model system for studying adaptive radiation theory.

Given the numbers and range of Penstemon — a large genus endemic to North America with 280 or more species described to-date and the possibility of many more yet to be discovered — this is an enormous project, with equally enormous potential.

Wolfe’s lab undertakes the field work; morphometric, ecological analyses and next-generation sequencing projects, while Kubatko’s lab takes on all analytical and modeling work for phylogeny reconstruction and examining patterns of hybridization in the phylogenetic tree.

Now, Wolfe and Kubatko will put ART to the test in Penstemon, using a phylogenetic framework derived from next-generation targeted amplicon sequencing of multiple loci.

A multi-species coalescent approach will be used for estimating a species tree from multi-locus data, and new methods of analyses will be developed to handle data sets with both many taxa and many loci.

The species tree inferred will be used to examine rates of species diversification across the genus, paying specific attention to the question of whether clades exhibit patterns consistent with those predicted by ART.

Analyzing morphological characters, ecological habitats, seed germination requirements, incidence of hybridization and geographical data, will help the team determine whether or not key innovations and/or ecological opportunities explain differences in speciation rates across the genus.

“This project is an ideal blend of methodological development and biological investigation, and this synergy fuels advances in both areas.  It is extremely rewarding to develop statistical tools that have immediate application to a compelling scientific problem,” Kubatko said.

Penstemon, a genus with more than 280 species comprising six subgenera divided into 12 sections and 23 subsections, certainly appears to have potential to become an iconic model system to study adaptive radiation theory.

Current phylogenetic hypotheses are based on limited, conflicting data, insufficient to resolve relationships among taxonomic groups or species. This project’s combination of next-generation sequencing, new phylogenetic methods and statistical modeling approaches, should enable a robust assessment of ART in this morphologically diverse genus.

“The phylogenetic framework developed for our study will benefit the broader scientific community for studying the evolution of morphological and ecological traits,” Wolfe said. “For example, pollination ecologists have been awaiting a robust and well-resolved phylogeny in Penstemon to better study shifts in pollinator-specificity from insect to bird- adapted morphologies.”

Student mentoring and engagement are key elements of the research. Kubatko and Wolfe focus efforts on building a community of quantatively-trained biology  students where statistical modeling is a key element for addressing systematics questions.

New methods/software for handling large phylogenomics data sets will be available to the research community, free, on Kubatko’s website.

“The methodology developed for the Penstemon project will be applicable to other large phylogenomic datasets, as well, and will provide a set of scalable tools for inferring species trees that are currently lacking in the phylogenetic community,” Kubatko said. 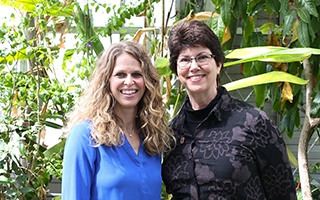