In autumn 2020, the Department of Women’s, Gender and Sexuality Studies (WGSS) launched a new LGBTQ+ studies minor for students who want to explore the broad array of how people embody and express gender and sexuality.

The minor, which replaces the department’s sexuality studies minor, emphasizes an intersectional understanding of gender and sexuality and meets a growing interest from incoming students.

Shannon Winnubst, chair of WGSS, says the creation of the minor was driven by students who increasingly identify as LGBTQ+, particularly as trans and non-binary.

“We are really seeing the explosion of gender and sexuality expression in students,” Winnubst said. “They wanted a more specialized, deeper engagement with that.”

The basis of the minor’s curriculum is the histories of the gender binary and sexuality and how they are rooted in race, ethnicity, white supremacy, colonialism and empire, Winnubst said. Those, she said, have largely defined contemporary gender and sexuality norms. 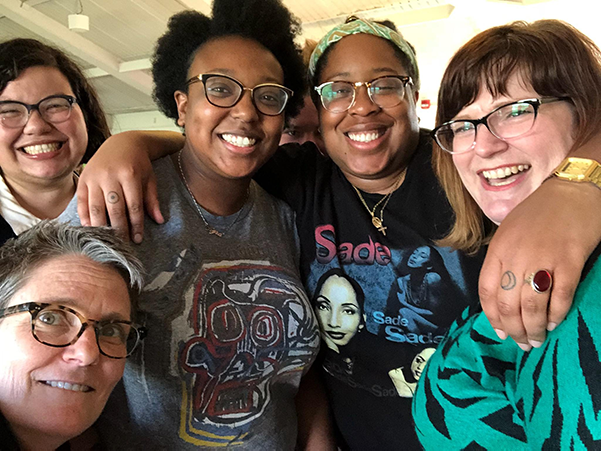 Winnubst, bottom left, and students at Feminist Fest in 2018.

And while part of the impetus for creating the minor came from a growing number of students personally interested in the subject, Winnubst said LGBTQ+ studies has very tangible applications to other areas, like medicine and education.

“We get a lot of calls to our department asking us to help educate various community groups about non-normative gender and sexuality,” Winnubst said. “Educators are interested because younger people really want to explore. The medical piece is also huge, clearly for all LGBTQ+ people, but particularly for trans folks.”

Winnubst said she hopes the minor will be a jumping-off point for more abundant research and education in LGBTQ+ studies throughout the university. She hopes it will encourage faculty members across Ohio State to develop courses that fit within the minor, thereby broadening and deepening the curriculum as a whole.

“You can really benefit from understanding LGBTQ+ studies more deeply no matter how you identify because by living in this culture you are participating in the gender binary and you're participating in heteronormativity,” Winnubst said.

She’s also looking to launch a LGBTQ+ health certificate to align with growing interest in trans health care within the College of Medicine, and she said eventually, she’d love to see a LGBTQ+ studies institute at Ohio State. Such an institute would enable colleges and departments to build stronger collaborations across the university, make a more meaningful impact and help Ohio State be a leader in LGBTQ+ research, education and outreach.