The project is vital, Sawyer said, “Humans have dramatically altered the nitrogen cycle through food and energy production activities. Increased nitrogen loading to landscapes often results in nitrogen export to the coast, leading to algal blooms, dead zones and declines in fisheries.

“However a vast majority of nitrogen never reaches the coast, rather it is retained within the watershed or transformed by microbes. The efficiency of nitrate removal is generally thought to decrease from headwaters to coasts, but is poorly constrained within tidal freshwater zones (TFZs).”

Additionally, Sawyer explained that these zones are rarely monitored for discharge or nutrient fluxes, and are dynamic transition zones between rivers and estuaries.

The researchers' proposal asks the questions:
How do tidal dynamics control nitrogen transformations within TFZs? How do these processes upscale to influence nitrogen fluxes from land to sea?

Over the next three years, we will be hard at work measuring nitrate concentrations along tidal freshwater zones. Our challenge will be to tease out how nitrate is flowing towards the coast under highly dynamic tidal conditions. We also will be running numerical models to expand our observations to other coastal settings,” Sawyer said. 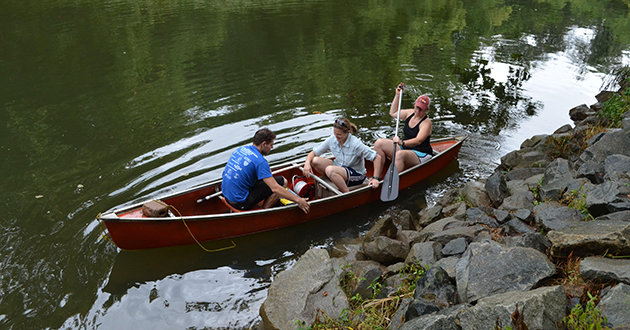 Above: An "action shot" from the field shows Sawyer’s PhD student, Corey Wallace; co-PI Rebecca Barnes; and Sawyer (middle), in a canoe during their first field season this past August.

The photo was taken at high tide,” Sawyer said. “The river is fully fresh and is an important source of drinking water for local municipalities, but it has a large tidal range. The water level falls by almost a meter from high to low tide! These tidal freshwater zones are at the front line of sea level rise and land use change, but they are rarely monitored or studied."

Sawyer, who previously was a tenure-track faculty member at the University of Kentucky, came to Ohio State in August 2014. She was lured to Ohio State, she said, because, “There is an abundance of researchers focused on water, both within the School of Earth Sciences and across other departments and colleges. It's an exciting place to be for a hydrogeologist.”

Sawyer’s $256,672 grant supports a PhD student, who is now getting his feet wet on the project, and two undergraduate researchers, yet to be selected.

Project data and models will be made available to the scientific community through the NSF-supported Critical Zone Observatory network. 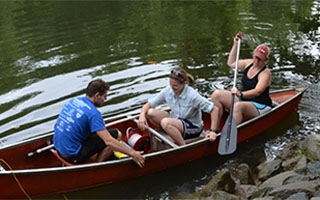