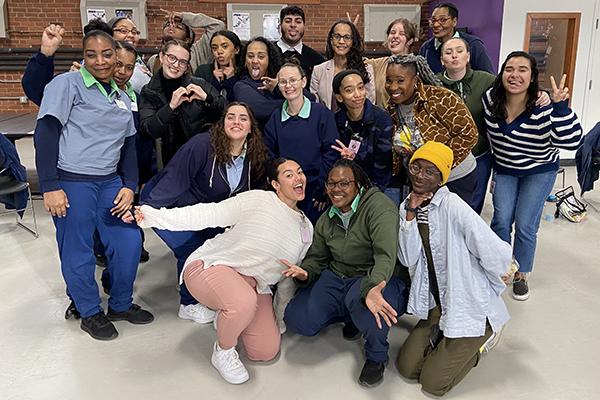 When incarcerated students enter a class that is part of the Ohio Prison Education Exchange Project (OPEEP), they hear something that is otherwise uncommon.

Their own first names.

“In incarcerated spaces, people only have last names or are referenced as a number,” said Mary Thomas, associate professor of women’s, gender and sexuality studies. “A lot of the inside students we teach — even when they live in the same unit — they realize they don’t know each others’ first names. I have students who say, ‘Wow, I haven’t been called by my first name in years.’”

Thomas and Tiyi Morris, an associate professor of African American and African studies at Ohio State Newark, are co-directors of OPEEP, a joint effort between Ohio State and the Ohio Department of Rehabilitation and Correction. A small selection of college-level courses are taught inside correctional institutions by Ohio State faculty to Ohio State students — some who are incarcerated within the facility (inside students) and some who are not (outside students). The program leverages inside-out teaching in prison settings to increase access to higher education for incarcerated people, build strong prison-to-college pathways and dismantle repressive misconceptions of justice-involved individuals.

Moreover, OPEEP hopes to return to incarcerated people what the American penal system too often strips from them: their humanity. Addressing one another in class by their first names is a simple, yet vital, first step.

“At the heart of the prison system is dehumanizing people, separating them completely from society and thinking that they don’t deserve any type of rights or humane treatment because of their incarceration,” Morris said. “Education is a human right. Everybody deserves it. That intellectual growth is part of one’s identity development and is something everybody should have access to.”

OPEEP’s origins go back to 2009, when Angela Bryant, then an associate professor of sociology at Ohio State Newark, was awarded a grant to develop and teach an Inside-Out Prison Exchange Program course — the first one taught at Ohio State. Classes initially took place each fall at the Southeastern Correctional Institution and eventually grew to other facilities around central Ohio.

In 2019, Thomas and Morris began teaching Inside-Out classes at Franklin Medical Center. Wanting to expand Inside-Out’s offerings and scope, Thomas, Morris and Bryant received funding from the Global Arts + Humanities Discovery Theme and co-founded OPEEP in January 2020. OPEEP courses began that semester, were forced to stop because of COVID-19 and resumed in spring 2022. Classes — which range from gender and sexuality studies and art to psychology and Earth sciences — are now offered every autumn and spring semester.

Sociology major Kourtney Newberry, slated to graduate in spring 2023, is on a pre-law track and has long dreamed of working with young girls and trans youth and becoming a juvenile attorney. In high school, she realized she could notice the subtleties— gratuitous police presence, metal detectors, discriminatory dress codes — used to discriminate against and criminalize students of color. Newberry’s coach on the debate team recognized it, too, and encouraged her to use it to create positive change.

“I’m invested in researching the school-to-prison pipeline,” Newberry said. “I saw how teachers and administrators overpolice Black students, and it really did a number on me. I was like, “This is not normal. We shouldn’t be treating kids this way.’

Though Newberry had already satisfied the GE requirement an OPEEP course would have fulfilled, she jumped at the chance to register for “Feminist Perspectives on Incarceration,” which Thomas taught at the Ohio Reformatory for Women.

“I needed to get a sense of what it’s like in prison, and OPEEP was a great way to understand what life in prison entails and the kind of issues it poses for people when they get in,” she said. “I wanted a more intimate understanding of prison beyond what you can get in a class. Meeting people face to face, it was really great.”

Though OPEEP was hampered initially by the pandemic, the project is growing quickly. When it started, only two Ohio State faculty members — Thomas and Morris — were trained on Inside-Out teaching. Now, there are 25. By this time next year, there will be closer to 50 trained faculty with courses representing all five regional Ohio State campuses. With continue support from the provost’s office, OPEEP is hiring more staff, applying for more funding and laying the groundwork for inside students to become on-campus students post-incarceration. Thomas and Morris also plan to implement an associate’s degree program through OPEEP offered via Ohio State Newark, with an embedded bachelor’s degree in women’s, gender and sexuality studies offered in the future.

For Newberry, such efforts are vital in the push toward abolishing carceral punishment and dismantling for-profit mass incarceration.

“Prison isn’t the remedy to our societal ills,” she said. “If anything, prison reflects what we as a society aren’t investing enough in.”