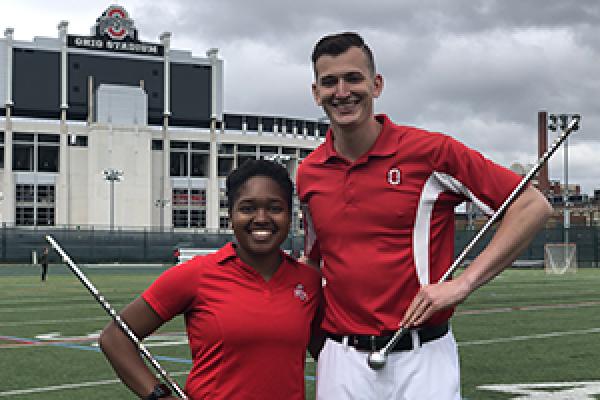 After a competitive afternoon of strutting, back-bending and twirling, the 2018 drum majors for The Ohio State University Marching Band have earned their positions back for the 2019 season.

Barr, Davis and four members of D-Row, the band’s drum major training squad, competed on April 20 at the Lincoln Tower Park practice field in front of family members, friends and fans. Like all other members of the band, drum majors must try out every year.

Each candidate performed the traditional pregame ramp entrance (including the high strut from the north side of the field and the back bend), an individual twirling routine set to music and a series of five high aerial tosses. Adjudicators included the Marching Band directing staff and previous drum majors, and student musicians from the spring Athletic Band and 2018 Marching Band provided the musical accompaniment. At the end of the event, Barr and Davis were announced as the drum majors for the upcoming season. 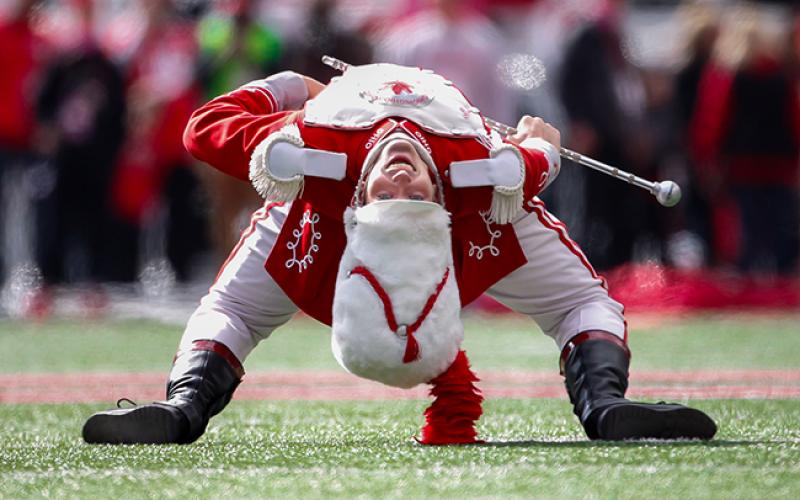 Konner Barr performs the signature back bend during pregame of the Ohio State vs. Minnesota game on Oct. 13, 2018.

“Being able to have all the experiences I’ve had in the marching band is something I’m honored to be a part of, and looking ahead to this next season, we don’t know what’s in store, but we’re excited,” said Barr. “Last year, in my first season as head drum major, I was really just trying to learn the position, learn the ins and outs of game days, and not take anything for granted. This year, I definitely am going to try and enjoy myself a little more and really take in the experience that is being in front of the Ohio State Marching Band.”

Barr has twirled competitively for 15 years, and prior to coming to Ohio State, he was drum major at Gahanna Lincoln High School for three years. Barr was on the drum major training squad his first year at Ohio State, and he was assistant drum major for the 2016 and 2017 seasons before earning the position of head drum major in 2018.

Like Barr, Davis is also looking to build on her experience in the position — while also stepping outside of her comfort zone as a performer. 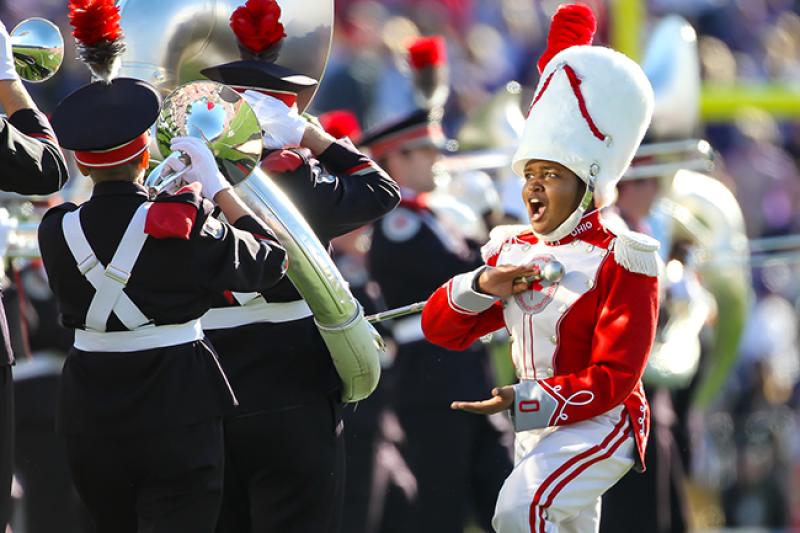 Morgan Davis prepares to high five the Script Ohio i-dotter during pregame of the Rose Bowl game on Jan. 1, 2019.

“I’m really excited to push my limits,” said Davis. “I had a good year last year, but it’s my senior year, so I want to go out on a high note. Going a little bit further, doing a little more this year is going to be exciting.”

Barr and Davis are the first two students to have secured their spots in the 2019 Marching Band. All others will try out in mid-August.