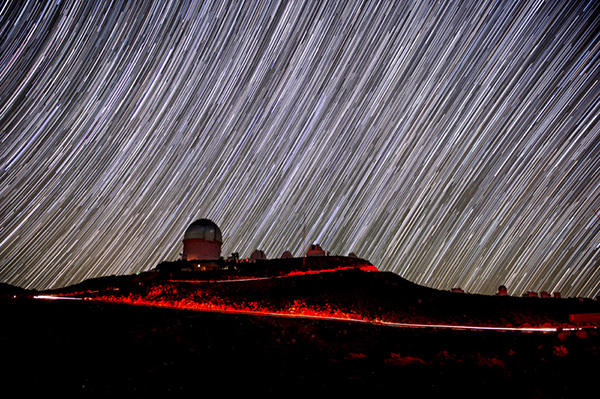 Cerro Tololo, Blanco Telescope dome — one of the telescopes used in the Dark Energy Survey — and star trails in Chile (Reidar Hahn, Fermilab)

The DES uses the largest-ever sample of precise galaxy shapes over an enormous piece of sky to produce the most exacting measurements of the universe's composition and growth to date. Newly announced results show that the way matter is distributed throughout the universe is consistent with predictions in the standard cosmological model, the best current model of the universe.

Ohio State’s Center for Cosmology and Astroparticle Physics (CCAPP) is currently home to three postdoctoral fellows who were involved heavily in the DES project — Ami Choi, Jack Elvin-Poole and Anna Porredon. Professor in the Department of Physics Klaus Honscheid helped develop the instrument itself more than a decade ago and has seen it through multiple generations of graduate students, doctoral students and fellows. Besides Ohio State’s three current fellows working on DES, 10 other contributors to the project at universities around the world are alumni of CCAPP.

“In some ways this is the grandest of Klaus’ achievements so far,” said David Weinberg, Distinguished University Professor in the Department of Astronomy. “We have this great experience of bringing in these super-talented postdocs, they all overlap so they each learn from each other, and then they go on to play crucial roles in making the whole analysis happen. It’s really been great to see.”

The DES project looks to measure how clustered dark matter is in the universe today. Because dark matter cannot be seen by the naked eye, the DES aims to measure dark matter through the way it bends and distorts light that passes through it. The DES is an extremely complex project that catalogued hundreds of millions of objects in the night sky and saw two of its three working groups led by current CCAPP fellows.

Choi began her fellowship at CCAPP in 2016 by wrapping up first-year analysis of the DES project. Her focus has primary been on weak gravitational lensing and distortions of shapes and galaxies. She has been involved in every step, running models, making measurements and co-leading the project’s weak lensing group for more than a year. Working with a diverse group of scientists from all over the globe, Choi greatly enjoyed the collaborative international effort that was still possible during the pandemic.

“It’s so difficult to get an international team across many expertise levels,” Choi said. “Traditionally, astronomy and physics was about the lone astronomer working by himself producing these papers. This is really the opposite. It’s really including more than 30 dedicated people over many years.”

Elvin-Poole, a CCAPP fellow since 2018, has been coordinating the large-scale structure working group that measure galaxy structures. He helped decide how galaxies were selected, searched for flaws in data and helped send that data through to the cosmology side of the project.

"This is the largest data set of its kind,” Elvin-Poole said. “So it requires a lot of care to produce accurate dark energy results."

Porredon joined CCAPP in 2019. She worked with Elvin-Poole in the large-scale structure working group, primarily focusing on selecting which galaxies were measured by the DES. She pioneered a careful, systematic approach to use all galaxies which were bright enough to be measured.

“These analyses take several years because of the complexity and there are all these working groups focusing on different parts,” Porredon said. “It’s not trivial to coordinate between them. I’m really happy with these results and seeing the result of this hard work over years.”

“With the large Ohio State involvement, it really is like a family affair,” Honscheid said.

Over the course of six years, DES surveyed 5,000 square degrees — almost one-eighth of the entire sky — in 758 nights of observation. The results announced last week draw on data from the first three years — 226 million galaxies observed over 345 nights — to create the largest and most precise maps yet of the distribution of galaxies in the universe at relatively recent epochs.

Since DES studied nearby galaxies as well as those billions of light-years away, its maps provide both a snapshot of the current large-scale structure of the universe and a movie of how that structure has evolved over the course of the past 7 billion years.

“You put all of those things together, and the result is the most precise-ever measurement of how dark matter is clustered in the nearby universe,” Honscheid said.

To test cosmologists’ current model of the universe, DES scientists compared their results with measurements from the European Space Agency’s orbiting Planck observatory. Planck used light signals known as the cosmic microwave background to peer back to the early universe, just 400,000 years after the Big Bang. The Planck data give a precise view of the universe 13 billion years ago, and the standard cosmological model predicts how the dark matter should evolve to the present. If DES’s observations don’t match this prediction, there is possibly an undiscovered aspect to the universe. While there have been persistent hints from DES and several previous galaxy surveys that the current universe is a few percent less clumpy than predicted — an intriguing find worthy of further investigation — the recently released results are consistent with the prediction.

“We start from observations that tell us how clustered the universe was when it was half a million years old and 1,000 times smaller than it is today,” Choi said. “We use the theory of gravity and dark energy to predict how clustered dark matter will be today, 13.8 billion years later.”

Ordinary matter makes up only about 5% of the universe. Dark energy, which cosmologists hypothesize drives the accelerating expansion of the universe by counteracting the force of gravity, accounts for about 70%. The last 25% is dark matter, whose gravitational influence binds galaxies together. Both dark matter and dark energy remain invisible and mysterious, but DES seeks to illuminate their natures by studying how the competition between them shapes the large-scale structure of the universe over cosmic time.

“DES has now measured that clustering with a precision of 3%, and it matches this prediction,” Porredon said.

“That's a staggering success, but we want to make this test even sharper,” Elvin-Poole said. “Ultimately, we hope that theory will fail so that we learn something we don't already know.”